I hadn’t grasped how small and densely populated Gibraltar is: 2.6 square miles with over 30,000 people. 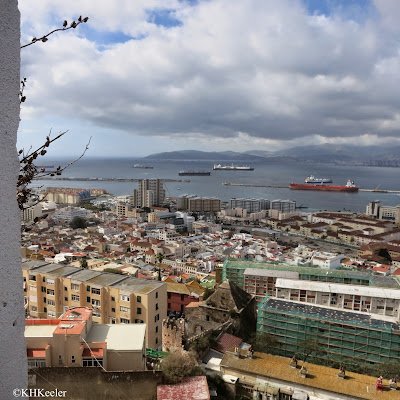 The bay teemed with commerce.

The residents are packed in along the coast. Since the land rises steeply and Gibraltar has water on three sides driving is tricky. In the residential areas, cars weave through narrow streets. The essential tourist trip to the Top of the Rock is one-way, winding and sometimes motionless, with lines of vans carrying tourists.

Gibraltar’s language is English. The residents determine local laws and leave their foreign policy and defense to the U. K. In 2002 they voted 98% to continue this relationship. My tour guide asserted a vote today would be the same. Many residents are from families generations on Gibraltar. In the last century the relationship between Spain and Gibraltar was sometimes hostile and the residents have long memories. And yet, when the tour drivers talked amongst themselves, their English sounded like Spanish. They told me the language was influenced by many day workers from Spain and local slang.

I had imagined the Rock of Gibraltar as solid. From the sea it gives that impression. But in fact there are vast natural caves. The biggest, St. Michael's Cave, is impressive! In contains an amphitheater. The acoustics suggested that concerts and church services there are awe-inspiring.

St. Michael’s cave had massive stalagmites and stalactites and grottos dropping away downward into darkness. Everything you want in a cave. And more: somehow people can't resist colored lights in caves, so my photos are purple or blue.


Gibraltar has many natural caves: the limestone Rock is steadily dissolving.

Driving upward, dodging other vans of tourists, suddenly there are monkeys. The Barbary macaques of Gibraltar are the only monkeys in Europe and a major attraction. The government provided ample fruit and nuts for them, so although some begged, most went on about, well, monkey business.


This photo looks out from near the top of the road. The Rock is 1398’ high, but the roads don’t go quite that far. 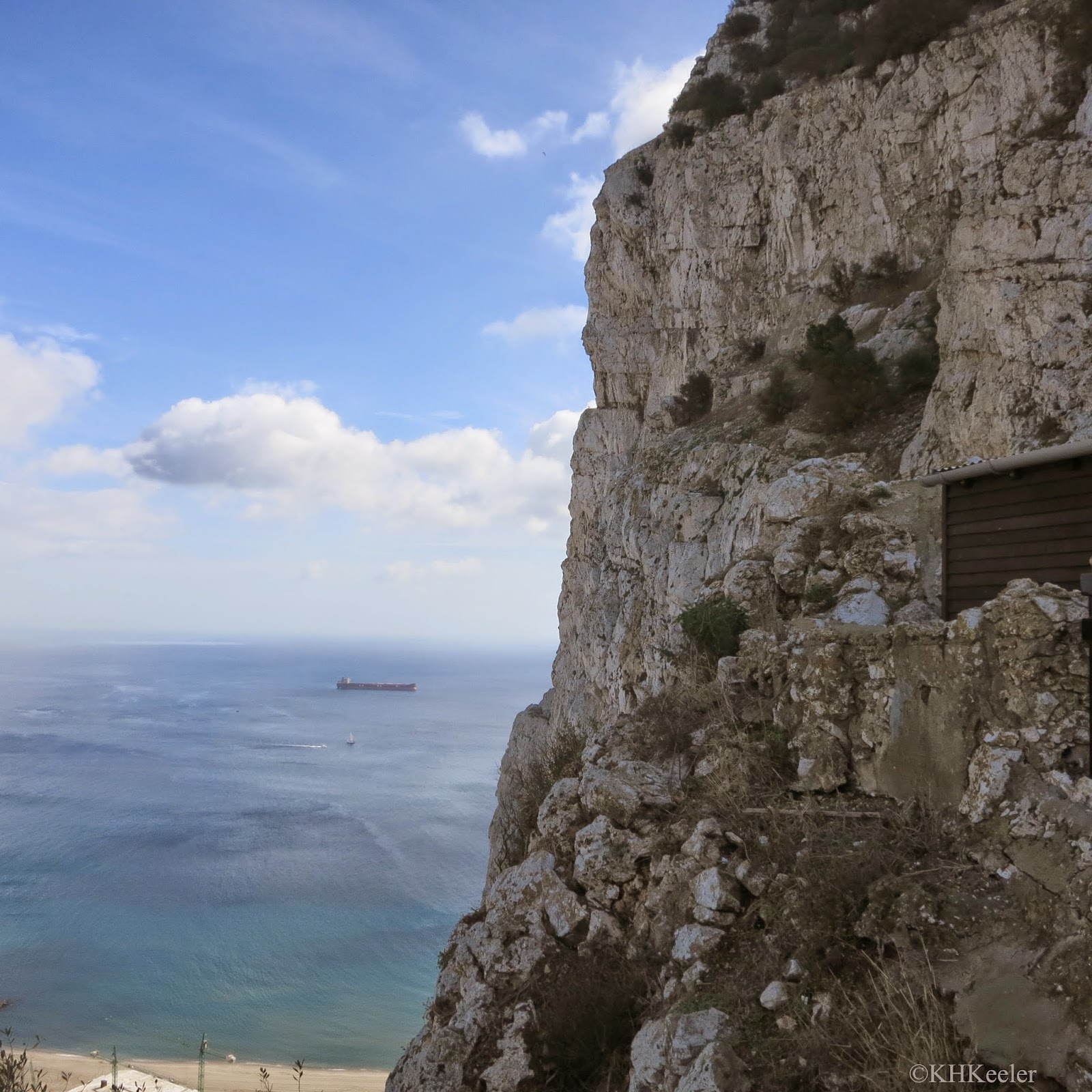 Looking down to the inhabited areas and the bay 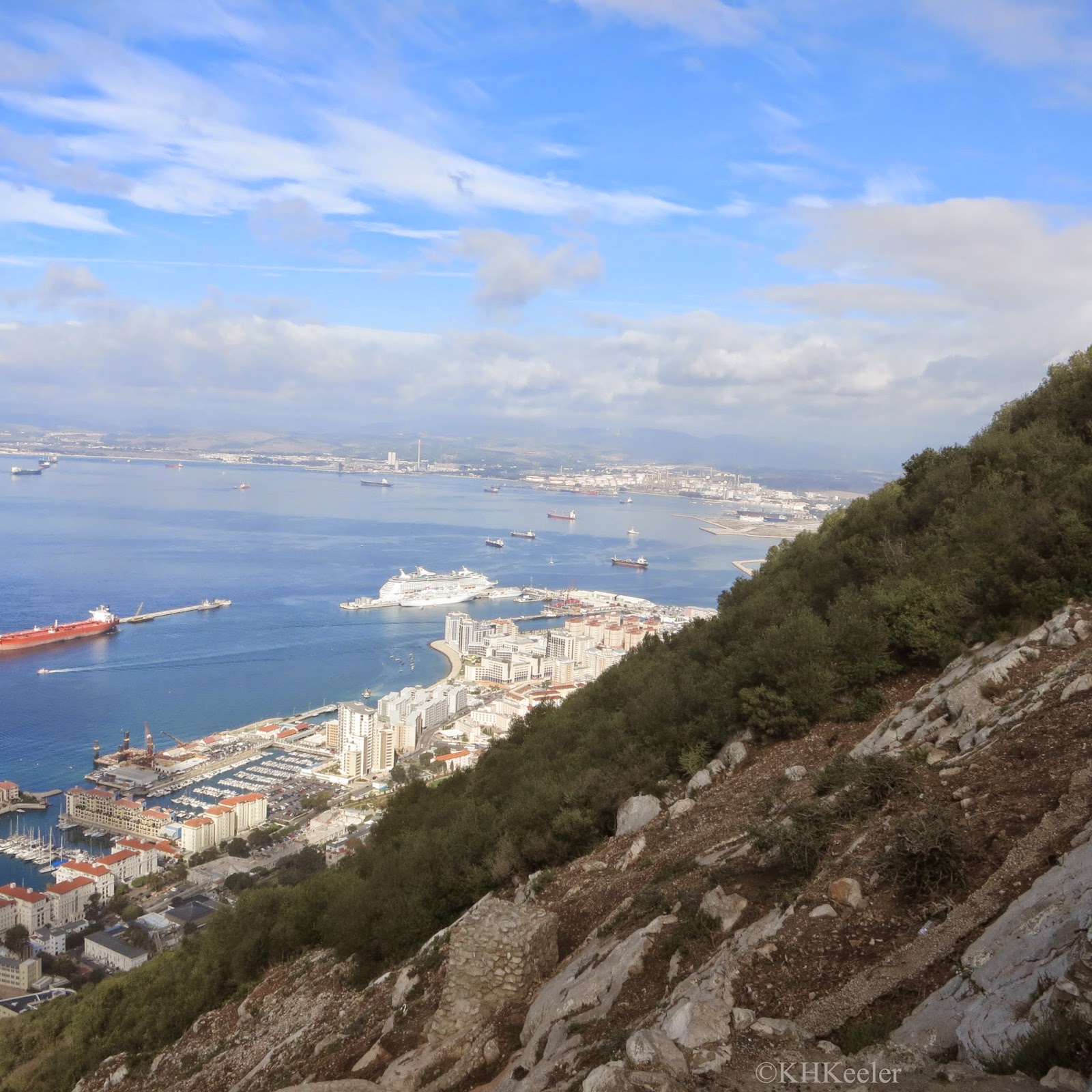 The Rock has human-made caves—for storage, for defense, as refuges for civilians. A tunnel built for cannon, aimed at Spain, now features military history. Nevertheless I was reminded of the ebb and flow European alliances.

Looking north brought home how tiny Gibraltar is. In the photo, where the big buildings begin, that is Spain.


Just nearer is Gibraltar's airport. Fitting jet runways into a spot of rocky land was a challenge. The road to Spain crosses the airport runway. Traffic stops when planes take off, along the road paralleling the visible airplane. Between flights, the road—lower left to upper right—is open for vehicles. In my photo, a plane has just departed and cars have started to come across.
The road down the Rock passes a moorish tower built about 1000 AD. Christians replaced its mosque with a chapel and continued using the building. It commands a fine view (last photo below). 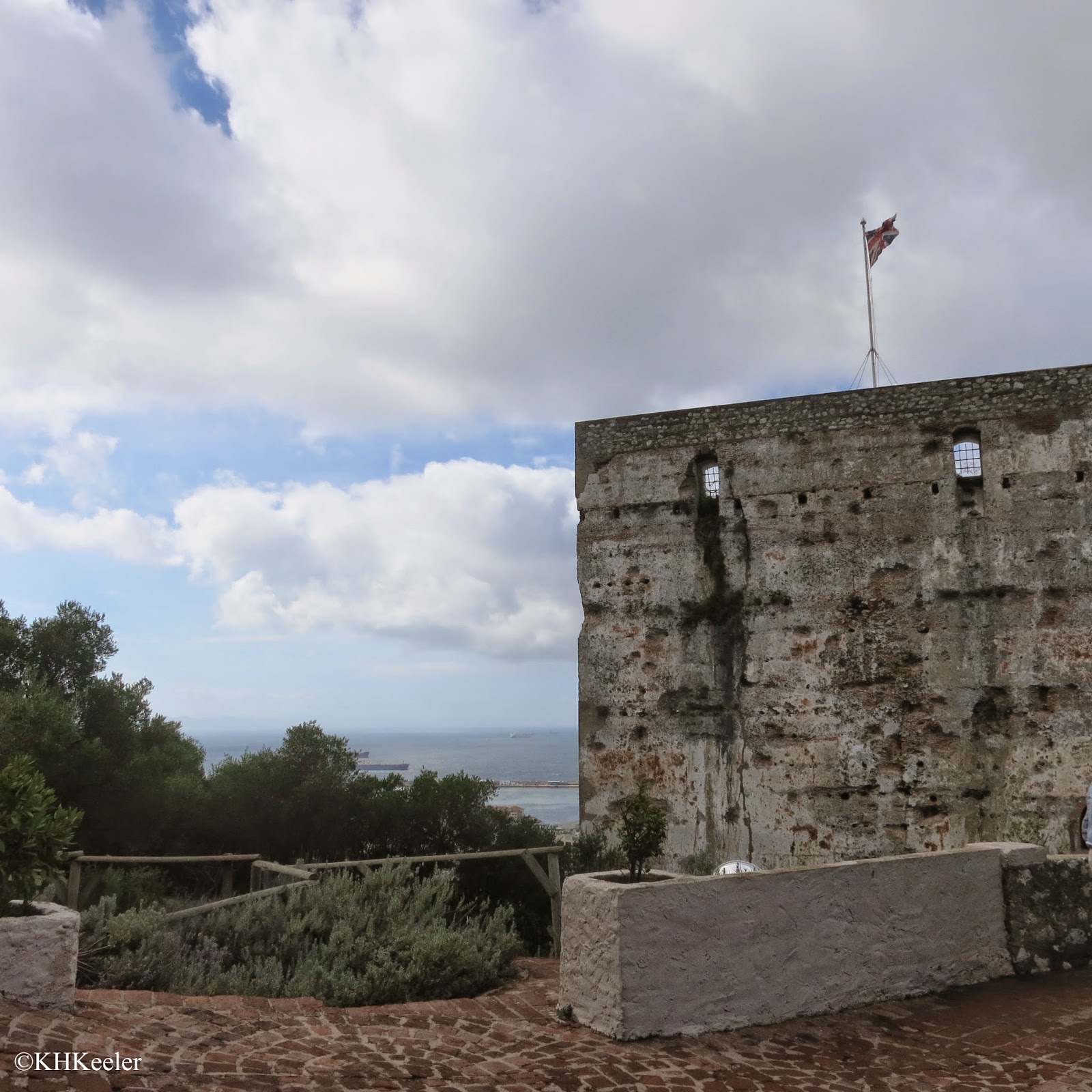 Wires lining the walkway to the moorish tower reminded me that monkeys are dexterous wild animals. A snug metal mesh door sealed off the path. 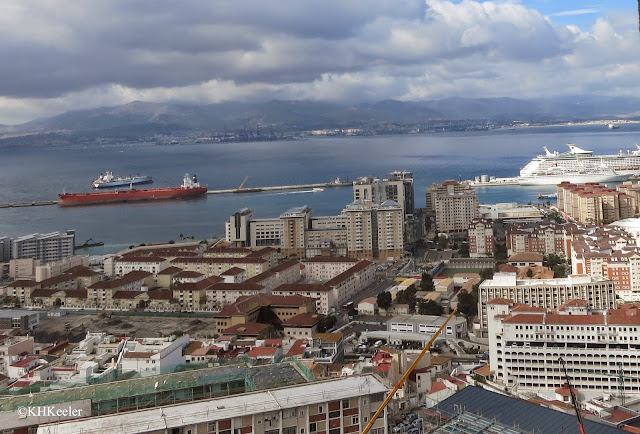 In Gibraltar I found not just The Rock I had read about, but complex threads of European history, the plants and animal of southernmost Europe, and deep glorious caves!


Posted by A Wandering Botanist at 1:18 PM