The bird of paradise flower, Strelitzia reginae, is so commonly planted in tropical and subtropical climates--southern California, Florida, Hawaii in the United States--as to seem boring. 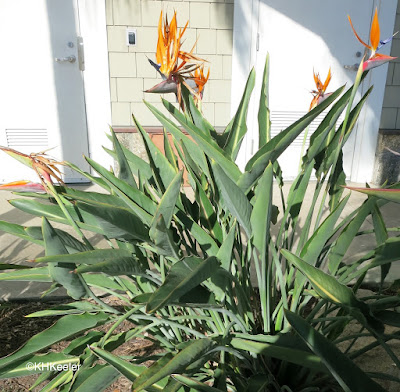 At the same time, for newcomers to those and more tropical regions, it is the essence of an exotic flower: very large, bizarrely shaped and in incredible blue, orange, red and green.

Bird of paradise is from South Africa, brought to western attention in the late 1700s. The flower is the group of bright blue petals, two of them fused together, and upright orange sepals.The blue petals hold a rich nectar (sugar water), lots of it, though not particularly concentrated. The orange sepals advertise. The whole flower is oddly turned to emerge from the red-and-green bract, so that it looks like a bird's head. In its native South Africa, it is called crane flower (in several languages).

The red-and-green bracts (called a spathe) under the flower contain up to six buds. In the picture below, the orange sepals to the left are from a dying flower, the open flower has the three orange sepals to the right and the blue petals. Each flower lasts several days, so the one flowering stalk produces flowers for several weeks. Gently treated, cut flower stalks of bird of paradise can last several weeks as successive flowers emerge. 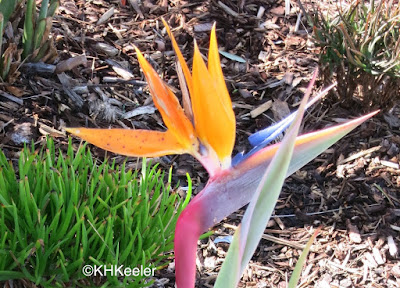 In Africa the flower shape is functional. The chief pollinators are cape weaver birds (Ploceus capensis) (photos). They perch on the tip of the lateral, fused blue petals, which are quite strongly reinforced and will support the bird, and from there cape weavers probe for nectar. The stamens inside the blue petals spring outward in response to the bird's activity and deposit pollen on the bird's feet. When the bird visits another plant, the stigma is released to brush the bird's feet and pollination happens. The cape weavers also eat a lot of the pollen, which is unusual for birds, but just as for us, pollen is highly nutritious. 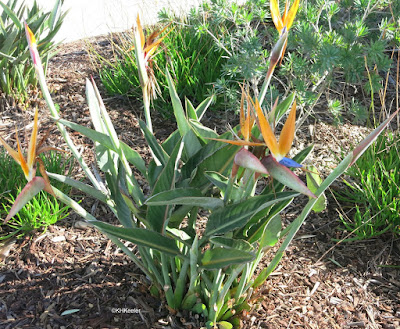 On the surface this sounds like a great thing--a pollinator is found in the New World--but it might turn bird of paradise, which generally stayed where it was planted, into an aggressive, invasive weed.

The seeds of bird of paradise are dramatic, black with a red-orange aril and an oil body. The aril is probably tasty to birds and certainly eye-catching and the oil drop is nutritious, which makes the seeds very attractive to birds. In South Africa, quite a list of bird species eat and disperse bird of paradise seeds (see seeds in Kew Garden post: link). I have seen no reports of American birds eating bird of paradise seeds in California, but it is worth watching for.

Bird of paradise was brought to Kew Gardens in England in 1773 by Sir Joseph Banks (bio). A major figure in British botany for decades, Banks personally named only two plants, but Strelitzia was one of them. He named it to honor his queen. Strelitzia refers to the region of Strelitz in Germany, the birth place of Queen Charlotte, Queen to George III of England. and the species epithet "reginae" means "of the queen." (Partial biography link, more on Queen Charlotte link). 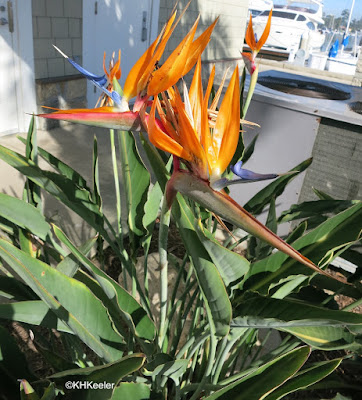 Where they are happy, bird-of-paradise plants flower abundantly. They can be grown as houseplants and will flower in a sunny window (but can get 3' tall). They are very much tropical plants, however, and require bright sunlight and temperatures of 50 F or higher, though they do better outdoors in summer if lightly shaded. Tough once established, they like plenty of water in a well-drained soil, and cool nights (60s not 80s). 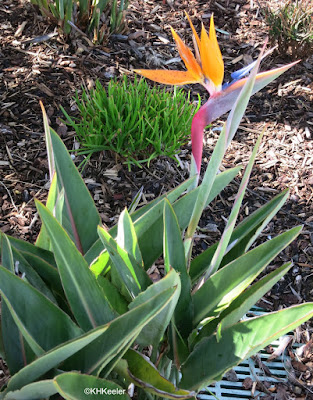 Widely beloved, they are the emblem of the South African National Biodiversity Institute (link), appear on the South African 50 cent coin (link), on the coat of arms of the Province of KwaZulu-Natal link, were chosen as the floral emblem of Los Angeles, California (link) and in very stylized form, are the emblem Aloha Air Cargo of Hawaii (link). There are probably many more.

The big leaves that make them attractive even when not flowering have a strange ridged surface that causes water to form elongated drops and quickly run off. The fact that you never see water on the leaves is not chance but very sophisticated bio-engineering involving both surface waxes and structure. Engineers have noticed and are imitating the structure for synthetic materials.

When you walk by flowerbed after flowerbed of bird-of-paradise, don't just think "oh, boring!" slow down to look for seeds and bird visitors. Or watch the leaves shed water when the sprinklers turn off. 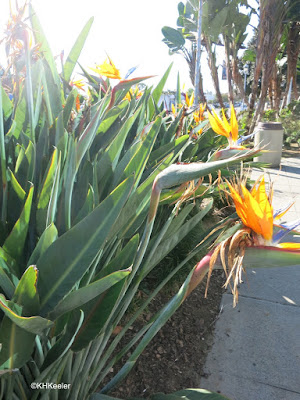 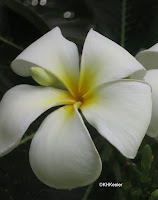 Posted by A Wandering Botanist at 2:27 PM