If you look at the entries in the Flora of North America for barberry species (Berberis), each notes whether it hosts Puccinia or not. That is not a common sort of entry into a plant description; Puccinia is a fungus, the genus of wheat rusts. (Examples  Berberis amplectens, Berberis aquifolium , Berberis bealei and every other one: scroll down to Discussion).


Here's the story:
Berberis vulgaris, common or European barberry, has a long history in Europe. The fruits are edible though picking them from among the spines can shred your hands. Secondly, the plant grows densely, with tough, hard-to-break branches...and those spines. Europeans planted them as fences. (Barbed wire for fencing became available only in the 1870s.) Shrubs take some management but form a good solid fence at very little cost. Barbarry was one of the best shrubs for fencing.

When the New World was discovered and settled, barberry plants were brought over and planted as fencing. And, I suppose, some people made barberry jam. 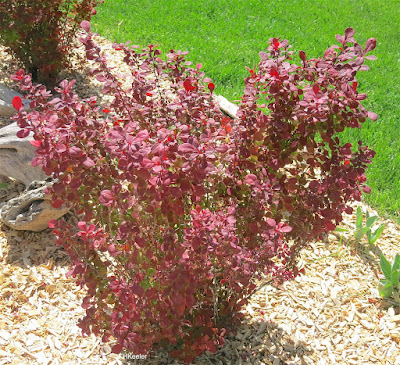 Meanwhile, across Europe and into the Americas, wheat (Triticum aestivum) was a staple of everyone's diet. When the wheat crop failed, there was widespread famine. Wheat crops can fail for many reasons, but a recurrent scourge, since Roman times, was wheat rust. This pathogenic fungus, genus Puccinia, grows inside wheat plants, cuts off their circulation and kills them, so no wheat matures. The surface of the plant looks red-brown and blotchy, hence the name "rust."

Rust outbreaks recurred and the farmers were unable to stop them. In 1660, farmers in Rouen, France passed a law outlawing the growing of barberry where wheat was grown. Others found that too strange to believe and ignored it, but the French had it right. The dreaded black rust, also called stem rust, Puccinia graminis, has a complex life cycle in which it grows on first one host--barberry--and then moves to another--wheat--and back. If both plants aren't present, it dies out. (But can reinfect wheat from long-distance wind-borne spores).

Note: many plant pathogens have complex life cycles and often, like wheat rust, the alternating hosts have very little in common; barberry is a shrub in the barberry family, Berberidaceae, a Eudicot in the classification of flowering plants, while wheat is a grass (grass family Poaceae) in the quite distant Monocotyledon lineage.
Common barberry was firmly established all across North America before North Americans started making the connection to wheat rust. However,  the very first plant protection law in the United States was the banning of barberry in Connecticut in 1726. Wheat rust had been destroying New England wheat crops. However, by 1726 the industry had mostly moved to the plains of the Midwest, so it was too late for New England, but signaled the beginning of a general understanding of the problem. Of course it was controversial--even today it seems illogical--and difficult to enforce. An academic in Cape Cod (Massachusetts passed a similar law in 1754) reportedly held off the barberry-removers with a shotgun, "You don't touch my barberries!"

As midwesterners planted barberry for fencing, wheat rust outbreaks increased in intensity. By 1900 there was general agreement that barberry was wheat rust's alternate host but barberry was so abundant and the cost of removing it so astronomic that action was taken only on a very local level.

In 1916, Europe was fighting the First World War and the U.S. was on the brink of joining. The poor wheat crop got everyone's attention. A wheat failure in a nation at war would be a catastrophe, creating hardship both the armed forces and the people at home. Furthermore, it raised the prospect of the U.S. having to buy wheat from other countries, taking money away from the war effort. The result was unprecedented (and unrepeated) cooperation between the states and federal government to eliminate barberries. Barberry eradication was initiated as a patriotic act in an era of widespread support for the First World War. It has to have been an unpleasant project since the branches are hard to break and covered in sharp spines, yet across the main wheat-growing states, over five million barberry bushes were destroyed by 1922. Eradication continued so that 99 million (99, 445,774) plants were eradicated by 1967.

The eradication project is over, but common barberry and any species of barberry that hosts stem rust remain banned from wheat-growing regions. The barberry one sees as an ornamental is generally Japanese barberry, Berberis thunbergii, which does not host Puccinia graminis. Some species host stem rust, some just don't. Alas, Japanese barberry has escaped cultivation and become invasive across the north eastern U.S. link  Tough stems and spines make it a very unpleasant weed. A quick online search found many Japanese barberry varieties for sale. Absolutely do not buy them if you live in the Northeast, and I'd recommend against them elsewhere since it is an exotic with a record of invasion.

Common barberry can be found in the United States, too--of course they didn't get it all. It has been expanding since the eradication program ended in 1982. Though there was an enormously successful eradication project a hundred years ago, the threat to wheat remains, hence the comment on each species in the Flora of North America.

Posted by A Wandering Botanist at 2:20 PM