Recycling is on my mind because a National Public Radio (NPR) study (link) last month found that plastic recycling is basically not happening; most of the plastic goes to landfills. And always has. What? I am a believer in recycling. 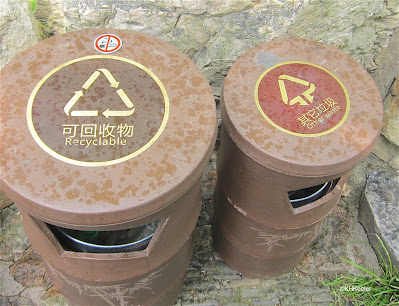 Studying at the University of Michigan, in 1968 I took my first ecology course. The class included "cycles," how carbon, nitrogen, water--every element and molecule--move through our world. One of the examples was aluminum, which is found in moderate amounts in the earth but was rapidly being mined to make aluminum cans and other materials. The cycle showed aluminum going increasingly to landfills. I embraced recycling then because it made sense to me that if we didn't gather used aluminum and reuse it, the aluminum would become ever harder and more expensive to produce. Post-human use simply needed to be linked into the cycles. By us, not by waiting thousands of years for natural processes to break down the cans.

But recycling isn't simple. Many of our products are complex, containing perhaps aluminum, plastic, iron, and things that we don't know how to recycle. They have to be collected, separated, and processed. For the most part, it is cheaper to use new materials. People and governments subsidize recycling and using recycled material is good public relations for corporations, creating some profit on something that is basically a service. The economics work better in cities, where lots of people create a concentrated waste stream. In rural areas, the cost of collection quickly exceeds any profit. Yet, if we manufacture without recycling, there will come a time when we will have to search landfills for materials for industry.

My traveling increased beginning about 2006. I found recycling difficult during travel. In 2006 I did not find recycling in hotels (it was common by 2019). Frequently there were no recycling bins visible in train stations or by museums when I wanted to dispose of something (in Europe there were no waste bins, either, to prevent bombs hidden there). The first pictures I have of recycle bins are from 2014. Majorca had bins for organic and inorganic waste, recyclable and non recyclable. Lisbon had plastic, metal, and glass, and elsewhere, cardboard. I began noticing recycling.

In the United States, recycling rules differ and knowing what to recycle and what to put in the trash is complicated. Having the instructions in a language you don't know makes it harder to choose between bins. I reflect when traveling that I''m fortunate that English is so widely used, that so many languages use our Roman letters, and that many words in recycling are cognates.

Beginning in 2015, I photographed recycling bins. I saw recycling in China, Belgium, Germany and Australia that year. Obviously it was world-wide.

Many were ordinary trash bins, labeled for recycling

But some had quite sophisticated designs:

And a few had made an effort to be aesthetic:
When I took all these photos, I believed I was seeing a sensible response to our wealth of manufactured goods and imagined the economics had been worked out. But no, the NPR article said. Oh-oh.
Reading follow-up articles, I find they say "yes" and "no." For example, in San Antonio, bottles are recycled but not other plastic, paper but not glass (link). Some plastics do recycle (link), but not, dear to a botanist, plastic pots, despite the recycle mark underneath (link). So it isn't simple. Better than in 1968, but not solved. The article that left me with hope, which I can't find again to credit, said that recycling is important for providing material to make more things--an aluminum or carbon cycle argument--and that will only increase in the future, so we can expect research to steadily overcome the technical issues.
Fifty years after that first ecology course, recycling makes even more sense. There are more of us (3.7 billion 1970, 7.8 billion 2020) and we have created and thrown away fifty years of stuff. Recycling will help sustain our wealth. I'll sort more carefully but continue to recycle rather than discard.

Comments and corrections welcome.
References not linked above
Koop, F. July 28, 2020. Why is recycling so important? The dirty truth behind our trash ZME Science
link  Accessed 10/9/2020.

Posted by A Wandering Botanist at 1:51 PM