Sometimes travel shows you unexpected wonders. I took a tour of art museums and gardens in the area of Los Angeles, California, in 2013. The tour took me to see Los Angeles County Museum of Art. Right next to it is the La Brea Tar Pit Museum. The tour surely mentioned it, but I didn't notice. Consequently I stumbled upon it.

I had a several periods of loving paleontology in my childhood. La Brea has been a resource and wonder in greater Los Angeles for as long as people have lived there. From Native Americas to Spanish settlers to Anglos, everyone gathered and used the tar--to caulk canoes, waterproof roofs, and much more. At the beginning of the 20th century, scientists recognized that the bones in the tar were of extinct animals, not just cows and wolves. I read all about it in my 1950s kids' science books and the Weekly Reader. A pool of tar that looked like water and when the animals--Pleistocene mammals like mammoths and American camels--came down to drink, they got stuck. And then the saber-tooth cats and dire wolves, attracted to the distress calls, would arrive, and they too would get caught in the tar, to die there and be preserved. It was a treasure-trove of well-preserved bones. My books had colored illustrations with mammoths trying to fight off great cats, as they all sank in the pool. So dramatic and strange.

Finding myself next to the real Tar Pits instantly reawoke my childhood wonder.

And, it looked so innocuous.

Los Angeles has a very dry climate, the water would be particularly attractive.

And if I didn't know better, would even the visible tar look dangerous? 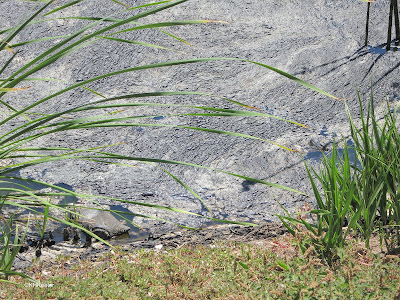 Really, look at those nice green plants growing next to it. How bad could it be?
But the answer is "very bad." Apparently the pits are deep, with no place to get your footing. Animals, especially heavy ones like mammoths, sank helplessly lower and lower, until they died and were buried by the tar. A terrible trap, for easily 50,000 years (from before the last Ice Age and through it to the present).
How did it form? It is a deposit of oil. Lying close to the surface, it gets exposed to air and transforms to tar, a sticky black form of oil. All of the oils and tars are complex in their chemistry, having been produced by the decay and preservation of prehistoric forests or sea beds. Asphalt and bitumen are other names applied to the tar of La Brea. (La Brea means "tar" in Spanish, so La Brea Tar Pits says the same thing in two languages.)
Bitumen lakes at the earth's surface are rare. There is a lot of bitumen not too far from the surface, the biggest deposit being Alberta, Canada's oil sands, but surface tar pools like La Brea are rare. I found six others described: two in California, McKittrick Tar Pits, Kern County, and Carpintiera tar pits, Santa Barbara County, California, the Fort Sill Tar Pits in southwestern Oklahoma, Pitch Lake, on the island of Trinidad, Lake Bermudez in Venezuela, Binagadi in Bagu, Azerbaijan. I expect there are others across the world, but probably not many. The Dead Sea, on the border of Israel and Jordan, isn't a bitumen lake but it releases bitumen from its depths, which was traded across the Middle East, for example to Classical Egypt, thousands of years ago.
The fossils removed from La Brea are amazing. more than 3.5 million, from 600 species. Full mammoths, sabre tooth cats, bears, camels, horses...see the list on Wikipedia (link). I wandered through the Museum, enjoying the presentation of big mammals. I, of course, looked for the plants, and was disappointed not to see a mention. Probably I missed it, because the Wikipedia list includes a number of plant species, typical California plants like coast live oak (Quercus californica), western poison oak (Toxicodendron diversilobium) and coast redwood (Sequoia sempervirens). Not stuff to fire a child's imagination. And it was clearly more of a trap for animals than plants. (Plants are smarter?)
The La Brea Tar Pits, the Los Angeles County Art Museum complex and Hancock Park all form a big public area within Los Angeles. There were lawns and trees typical of a city park.
And also, little fenced off areas and warning cones, 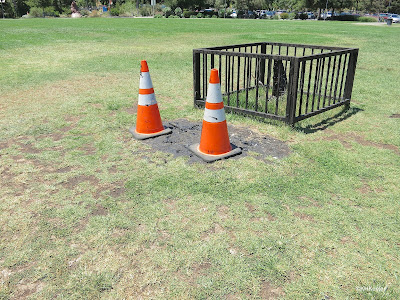 marking tar near the surface. 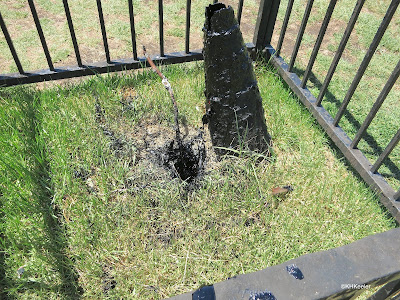 Trapped mammoths may be a thing of the past, but the tar remains, still looking harmless, still lurking.
There are lots of things to see in a visit to Los Angeles, but if you like natural history, don't miss a chance to marvel at the La Brea Tar Pits.
Comments and corrections welcome.
References
Gannon, M. Ten fascinating facts about the LaBrea Tar Pits. Mentalfloss.com link  https://www.mentalfloss.com/article/501974/10-fascinating-facts-about-la-brea-tar-pits (Accessed 1/5/2021).