Plant Photo Album: Plants of the Great Wall of China

With my husband, in 2010 I took a Photo Tour of China, with Grasshopper Adventures, led by acclaimed Australian photographer Ewen Bell. I was very skeptical that, with my level of photography, I'd enjoy a Photo Tour. However, I learned that photo tours are to be recommended even for non-photographers because they move slowly and take time to see the people and ordinary places. A sense of people and place is an important goal of travel, not just to see the mountains and buildings.

Nevertheless, I wrestled with the recommendation that good photos should not just document having been there, but should say something--express emotion or art or make some kind of point. Because, of course, I have always taken pictures to show “this is a morning glory” and support biological ideas.

So, I looked for my inner muse as we hiked up to the Great Wall. We went to the Simatai section  because the nearest access to Beijing was reportedly a circus of tourists and hawkers and the second nearest was under construction.

The Wall is spectacular.  The Photo Tour took us there with the goal of staying to watch the sunset.

I have to point out, as I admire the photograph, that the Chinese have traditionally hated the Wall.


The Great Wall was built by conscripted labor at great cost and with a shocking death rate among the workers. There are a lot of men who never went home to their families and are buried in the fill under the stones. Only in the last 200 years, as Europeans came, were impressed and brought their friends, did the Chinese start to think it as anything but a horror. 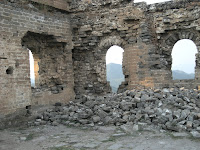 In addition to walls, there are watch towers, some falling down, some where you can look out at the surrounding hills.

I had a cheap digital camera but I tried a photo album of “Plants of the Great Wall.”

As you see, here and above, forest surrounded the wall. 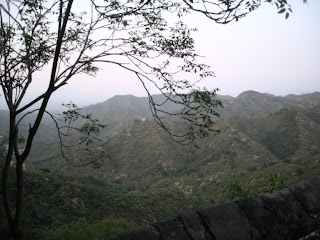 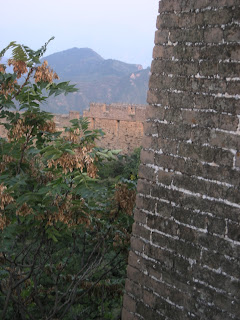 Here is a sumac bush that was growing beside the Wall.

Of course the Wall has been there long enough for plants to grow from the cracks. I looked for plants living on the Wall. Weeds, we might call them, but for them, human disturbance created opportunities, a rather admirable thing.


To the right is a Chenopodium (goosefoot family, Chenopodiaceae), possibly lamb’s quarters, C. album. Most common plants have several close relatives that look very similar. Consequently, when you are far from home, as I was in China, it is likely that what looks like a familiar plant is in fact the local relative of the familiar plant. Lamb's quarters, also called goosefoot, might be an exception to that. It is Eurasian and has apparently been common across China for a long time.

Below is a photo of a small sumac. In Colorado this would be in the genus Rhus, most likely smooth sumac, Rhus glabra. But this is sumac on the Great Wall of China. Chinese medicine uses Rhus chinensis, a Chinese sumac, as an important medicinal and a quick look at even very general books on Chinese plants show other plants I could confuse with sumac.  So, an unidentified, sumac-like small plant growing between the bricks.

See the little green plant in the photo to the right, at the base of the round stone?


Close up of plant in second photo.


It is a tomato, Lycopersicon esculentum, (nightshade family, Solanaceae). This is a species from the Americas which does not have close relatives all over the world. There are native species in the Solanaceae in Asia, eggplant (aubergine, Solanum melongena) in particular, but the very tomato-like close relatives of tomatoes are New World plants of South America.

Doubtless this plant grew from a seed from a tomato in someone’s lunch. 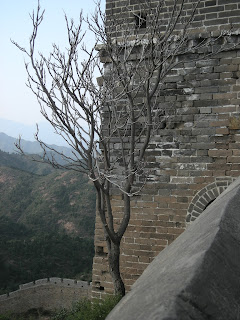 It was October, so I think this tree was dead. 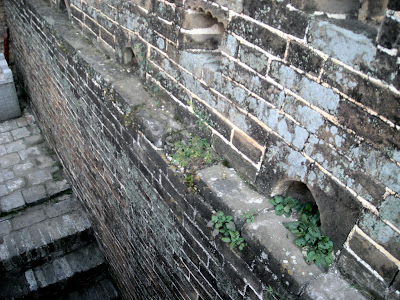 Here, the plants decorate the wall. 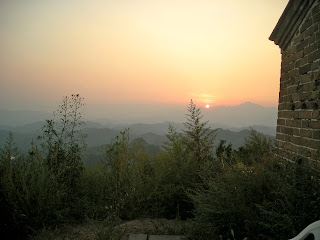 Sunset on the Great Wall. The plant on the left is probably a wild lettuce. The one on the right could be an Artemisia or any of a dozen robust weeds.

Yeah, only I would look at the plants not the sunset.  Here’s sunset for itself: 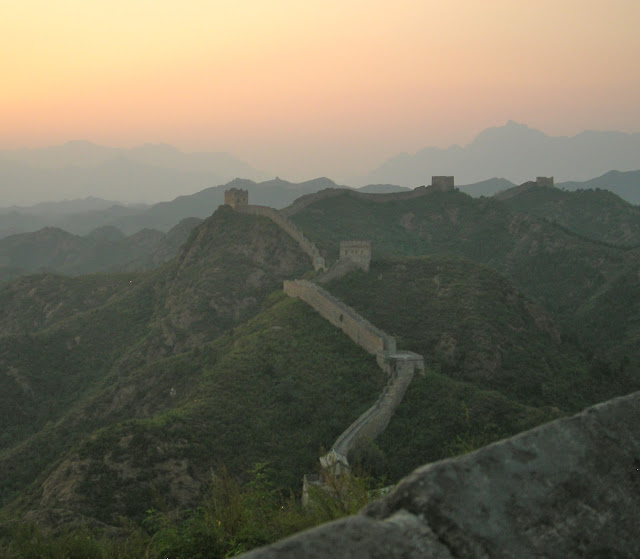