We had three nights of killing frosts and in the yard, my beautiful cosmos are all dead. These pictures are how it WAS.

The boquets I picked three days ago are all that remain.

Cosmos, Cosmos bipinnatus, is native to Mexico and intolerant of frost so it is grown as an annual.  Cosmos bipinnatus is called common cosmos, garden cosmos or Mexican aster, and it is related to asters and dahlias (sunflower family, Asteraceae). In my yard, garden cosmos make lots of seeds and some of those survive to come up in odd places in my yard far from the original flowerbed. So I often get lots of big semiwild cosmos wherever I don't weed them out. And since I like them, that means in many spots in my yard.


The USDA plants website lists it as a non-native plant that is found in more than half the states in the US, suggesting it has naturalized in some places.(map)  The  Invasive Plants Atlas shows a map of places which probably have too many garden cosmos. (map of places reporting garden cosmos as invasive)


In Yunnan, in southwestmost China, garden cosmos has clearly escaped and become a weed. A pretty weed, it made a wonderful splash of color on the hillsides when I was there in September.

(You never know when or where you'll encounter a familiar plant!)

Cosmos is a attractive and relatively easily eradicated if you don't want it, so while one might wish for big stands of equally pretty native plants, cosmos is a rather benign exotic invader.

And here's a picture from 2011, reminding me as I am bemoaning the end of summer flowers, that next summer there will almost surely be more cosmos in my garden. 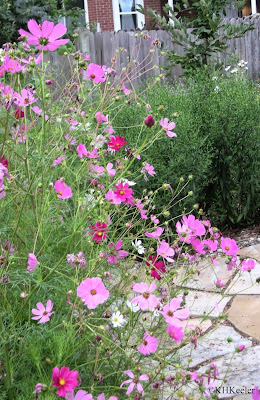 Has garden cosmos escaped onto roadsides and waste places where you live?

More at awanderingbotanist.com
Join me on Facebook
Posted by A Wandering Botanist at 8:32 AM