Abronia fragrans is a plant I would like to grow. So far, no luck! 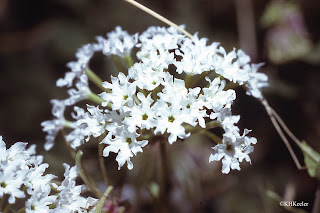 My common name for Abronia fragrans is prairie snowball, but the USDA website prefers snowball sand verbena and the Flora of North America calls it fragrant white sand-verbena. It is a small perennial plant in the family Nyctaginaceae (the family of four o'clocks and bouganvillea), native to the central U.S. plains (Distribution link).

I first encountered it at the University of Nebraska's Cedar Point Biological Station north of Ogallala, NE. We'd play volleyball after dinner beside the dining hall. About the time we were quitting one evening, I smelled a lovely scent. I circled our sandy playing field and found a scruffy little plant with long tubular white flowers. The scent reminded me of lilacs.

Waiting for the scent on subsequent nights, I found that it was released about 7 pm, which wasn't quite after dark standing in the open, but quite dark in shade of the field station's slopes.

The white flowers and strong scent suggested nocturnal pollination by a moth. (It could also indicate pollination by bats, but pollinating bats don't occur in west-central Nebraska.) I watched for moths but it was a year or more later that, with the help of student Myra Fredricks, we caught a moth visiting the flowers and showed that prairie snowball was indeed moth-pollinated. (See References).

In keeping with the typical characteristics of moth-pollination, the flowers are limp and nondescript during the day, but as it gets dark, they expand into a series of frilly white trumpets, each about an inch long. Then, later, the scent is released.

Studies of pollinators following a scent shows that they fly across it. When they can't smell it, they turn and fly at an angle until they intersect the smell. Comparing the intensity of the smell in two places tells them which direction to fly. This zigzagging flight path leads them to the source of the fragrance. 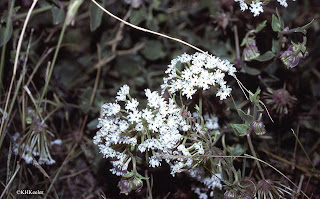 Typically, lists of the plants of the plains don't comment that prairie snowball is night-blooming.  Perhaps the writers thought it unimportant, but more likely, they don't personally know this particular plant and only saw it as a dried specimen. Or, perhaps they came upon it on a cloudy morning and did not realize it had opened the night before: nocturnal flowers wilt in heat and light, but cool cloudy days extend their visibility.

Prairie snowball has relatives across the west with yellow flowers. Probably these are open by day. The one below was part of a big stand along a sandy stream close to the ocean in northern California.

The plants I studied at Cedar Point died. All my observations suggest that prairie snowball requires sandy, open, very disturbed places to grow. That is, it does not survive in shade or when other plants are present to compete with it for water or space. When we first started teaching at Cedar Point, our agreement with the land owner was that cattle were ok, so as soon as we left in the fall until we returned in May, cattle ranged all around the buildings. The cows ate the plants, caused erosion and beat up the soil. Prairie snowball grew well under those conditions, but lots of other plants did not. Gradually the cattle were excluded, grass and shrubs expanded, and the prairie snowball plants died. 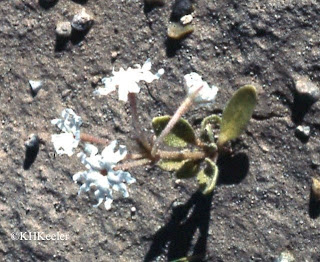 In 30 years of working in western Nebraska, I came upon prairie snowball only a couple of times. The one I clearly remember was a big plant in the corner of a small corral where cattle were briefly penned before loading them onto trucks. The sandy soil had been terribly churned up but not recently.

The wild plants remain a fond memory and so I would happily raise prairie snowball in my garden. Once in the last decade, one of the native plant seed companies had prairie snowball seed. I bought it and put it in my garden, but in several years, nothing has come up. I thought they would be weedy enough to germinate easily but that was not the case. It is possible they have a long dormancy period and one of these years seedlings will appear, but I don't count on it. I watch the seed companies like a hawk in hopes one will sell prairie snowball seeds again. If they do, I'll go to a great deal more effort to create conditions favorable for the seeds to germinate.

A grand little plant, not easy to find.


Kathy Keeler
More at awanderingbotanist.com
Join me on Facebook: https://www.facebook.com/AWanderingBotanist

Posted by A Wandering Botanist at 12:14 PM