Blanketflower, Gaillardia, is a native you probably know as a garden flower. Native garden flowers are not all that common. 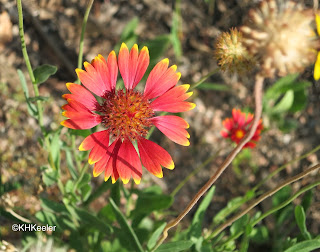 Recently, talking and writing about garden flowers, I looked at the origins of common garden flowers and noticed that only a few of them are native to central North America. The simplest explanation is time. Europeans first encountered these American plants in the early 1800s, so that's the earliest that they might have been considered for European-style flower gardens. In contrast, many European and Asian plants have been grown in gardens for 2,000 years. The consequences of long periods in cultivation include familiarity--how often do we favor the plants we grew up with? In addition, cultivation changes plants to make them more attractive in gardens, creating multiple colors, multiple sizes (for example, dwarf varieties), doubled flowers, high and predictable seed germination, good survival of transplanted cuttings. It reduces undesirable characteristics such as spines and aggressive spreading. Roses, lilies, most iris, crocuses, peonies, dahlias, daffodils and narcissus, tulips, and lilacs--to name a few--are all from Eurasia. 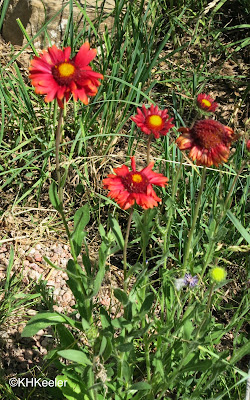 American plants have lots of garden potential, and many are available from seed companies and nurseries. A few plants from central North America have, in fewer than 300 years, become garden stars. One is the blanket flower, Gaillardia. Wild blanket flowers are found all across North America: there are 12 species, some with very limited ranges. 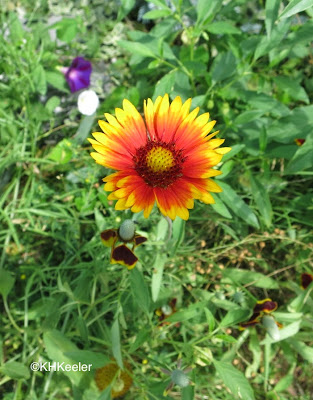 A thirteenth blanket flower is the garden blanket flower, Gaillardia x grandiflora. Garden blanket flower is a hybrid of the two widespread species, A. aristiata (blanketflower) of the west and northwest and A. pulchella (Indian blanket or firewheel) of south and southeastern North America. Interspecific hybrids allow gardeners to combine the good characteristics of two species, but often they are infertile. The genes of the two plants work well enough to make a live hybrid, but when they start to divide and recombine in reproduction, problems develop because the chromosomes from the two different species don't exactly match. When breeders are lucky or wait long enough, a seed might form in which instead of one copy of each parent's chromosomes, it has two. That plant will likely be fertile, because it has two copies of each chromosome which pair nicely. The new hybrid has twice the chromosomes of either parent but that is rarely a problem to plants. (Terminology: If the parents were diploid (with two copies), the new hybrid is tetraploid (tetra for four)). To breeders, it is a boon, because the four copies of the chromosomes take up more space than two copies, so a bigger nucleus is required and a bigger cell. Building the same shaped plant, bigger cells form bigger plants, so tetraploid hybrids often have bigger flowers than their diploid ancestors. Plant breeders love big flowers because gardeners love big flowers.

I should add that to make bigger cells takes more material, so tetraploid hybrids often grow more slowly and require more water and nutrients than diploids, but rarely dramatically more. 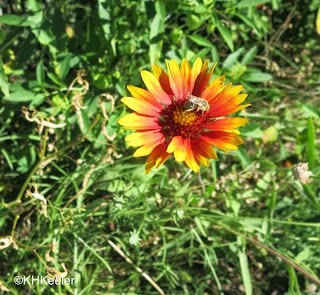 Thus, you can find wild blanket flower in native grasslands and meadows all over North America and buy wild forms for your garden. But also, all across the world, you can buy Gaillardia xgrandiflora for the garden. Garden blanketflower comes in a variety of colors (see Google images), is a short lived perennial and will reseed itself, at least for a few years. 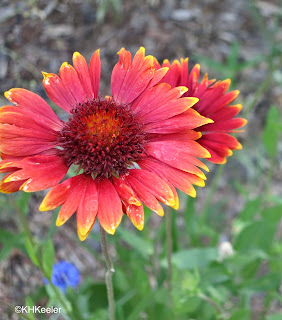 It is a story of domestication, showing one pathway for developing garden plants native to central North America.

Posted by A Wandering Botanist at 6:44 AM