Why did the tropical Asian dye garden lack plants for yellow dyes and have so many marked as red dyes?

I thought I knew a lot about dyeing. I’ve grown most of the dye plants available commercially, for example madder, weld, and dyer's safflower, I've dyed with spinach, onion skins, red cabbage (link) and other fruits, vegetables and spices that have a reputations for producing dyes. I've thrown practically everything that grew in my garden, from marigolds to English ivy, into a dye pot and I've gathered wild plants from aspen and bindweed (link) to yarrow to make dyes.

And yet, in Ubud, Bali, the dye garden of Threads of Life had plants I had only read about and ingredients for processes I'd never thought of trying. An afternoon was not enough to really understand what I saw.

Doubtless you are thinking: of course there would be new plants, the native plants of the central U.S. are very different from Bali, in tropical Asia. And that's is part of it. 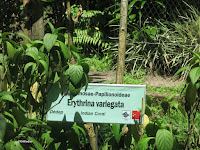 Despite my knowledge of dyeing, I walked the Threads of Life dye garden in Ubud, Bali, puzzled. There were so many plants marked that they were used to make a red dye (red square on the sign), and so few marked as making a yellow dye. For me, yellows are easy (blog): lots of different leaves make yellow dye when mordanted with alum and reds are difficult.

The difference, I eventually realized, was that I dye wool and sometimes silk. In Bali, they dye cotton. Cotton is a plant fiber, not an animal fiber like wool and silk, and under conditions that make bright colors on wool and silk, cotton dyes very palely. Dyeing cotton was discouraging and a minor part of the European tradition so I quickly turned to dyeing wool.

But in southeast Asia, they didn't raise many sheep or wear wool. Silk was reserved for the wealthy or special occasions. Cotton was--and is--the fiber of choice. It can be woven wonderfully light, keeping one cool in the sticky tropical heat and humidity. But it is hard to get bright colors on cotton.

Lots of plant signs had red squares (see above), which indicated they were used in making reds. My first impression was that Bali had a lot of choices of red dye. How wonderful! But the truth is that red is a highly desirable color but not easier to dye onto cotton than yellow. The red dye formulas combined several dye plants but furthermore required a series of additives, serving as oils or gums, as mordants and to control pH.

Papaya leaves, for example, were used to adjust the pH of dye baths when making red.

Reds on plant fibers (cotton and linen) pretty much eluded European dyers over history. They dyed wool red with madder or kermes (see cochineal blog) but not cotton or linen. Consequently, the reds of calicos and muslins (cottons) brought from India in the 1500s were a immediate sensation. Dyers in India didn't dye cotton red easily, on the contrary, they worked very hard at it, but they had mastered it. (historic calico pictures; early muslins pictures)

Asia had, in addition to a series of species of madder (Rubia), plants like Morinda citrifolia, called Indian mulberry and cheese fruit, noni in Hawaii (coffee family Rubicaceae), a small tree of tropical lowlands. Indian mulberry roots yield a red dye, but to attach that (or red from madder) to cotton required many steps. Cardon reported that dyeing cotton with Indian mulberry root powder in India included the minimum following steps: the fibers were oiled with castor oil (from Ricinus communis, spurge family Euphorbiaceae), treated with cow dung, and then strong lye, three to four times a day for a week. Meanwhile the bark power was boiled in water to make a dyebath. The yarn was throughly soaked in the dye bath, then more dye powder was laid directly added on the cotton threads and kneaded well for 10-15 minutes. The threads went back into the dye bath and were left in the sun for a day. The next day they were boiled in the dye bath again and then allowed to dry in the sun. The whole process, from lye treatment on, was then repeated a second time.

Clearly, red was worth a lot of work.

Sappanwood (Caesalpinia sappan, pea family Fabaceae) provided another source of reds in southeast Asia. The heartwood of this small tree, native to the southeast Asian tropics, was powdered to make a red dye. The tree was cultivated all over the region and was traded to Europe on a large scale in the Middle Ages. At that time it was called brazilwood, based on braza, glowing coals. It produces a strong red, that is colorfast in water but fades quickly in bright light. Medieval European guilds regulated use of sappanwood dye carefully to take advantage of its bright color but avoid complaints from customers when it faded. A series of related trees found in the American tropics, for example (American) brazilwood, Caesalpinia echinata, joined the international red dye trade beginning in the 1500s, immediately confusing the names. As noted below, the international trade in dye plants was destroyed by the invention of analine dyes, and only a trace of it remains.

Another reason that I saw so many different plants used for making red dye was that different groups in southeast Asia used different plants in their formalae for red. I liked the idea that people in Bali and Java worked out comparable processes using different local plants.

I SO wished to have time to try all the variations and make all these colors. I had to settle for buying small samples of dried leaves to experiment with at home.

The result of a lot of work by the dyers of southeast Asia was a color palate for cotton and other plant fibers that featured deep blue, browns, and white, supplemented by reds, yellows and nearly black shades. They carefully applied those colors to the threads or dyed the cloth using batik or shibori methods to produce complex bright patterns (see earlier post link). In Europe, wool was the fiber of choice and the color palate there featured reds and red purples, medium to light blue, strong yellows, greens created by combining blue and yellow and natural wool browns and tans. White was rare because pure white wool was rare and good bleaches were slow to develop. Black was difficult but by the 1500s European dyers were creating rich blacks. All of this changed dramatically after 1856, when the invention of inexpensive aniline dyes broadened the available list of colors to the bright shades we have today and made natural dyes obsolete.

I was humbled to realize that what I knew about natural dyeing was so very regional, tied to the north temperate plants that grow around me and the widespread use of wool. A clear lesson is that other areas of the world, for example, Africa and South America, will reveal new insights into dyes and dyeing, because the fibers and available plants were and are different there. So much wonderful diversity in our world!


I again thank William Ingram and Made Maduarta for making me welcome to the dye garden on a day when, because of the Galungan holiday, it was officially closed, and Sterling Tours leader Cheryl Nichols for her help making connections.

Previous post about the Threads of Life Dye Garden link.

Posted by A Wandering Botanist at 4:51 PM