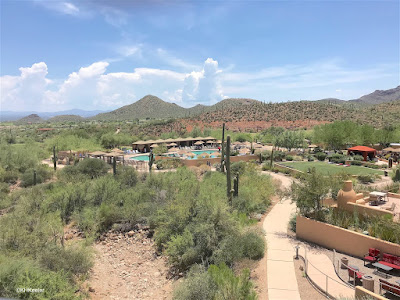 The Botanical Society of America met in Tucson, Arizona at the end of July. I attended to keep current. Everyone said "Arizona? In July?" but it was lovely (see blog about the desert in July link).

I have been paying attention to the concepts underlying biology since I took introductory college biology in 1969. Changes are subtle but steady. Some are driven by technology: DNA sequencing has replaced protein comparisons; better computers has led to studying of vast groups of organisms simultaneously; flow cytometry, which allows quickly measuring cell contents, including DNA, has fueled the study of polyploidy (multiple copies of the chromosomes, common in plants), to name a few developments.
How we interpret data has changed as well. For example, when I first learned biology, adaptation was used to explain virtually everything in nature. Then neutral mutations were detected and many puzzling patterns were seen as neutral; the genes have to work, but which particular one the organism has does not matter (five petals or four? alternate or opposite leaves?). Island biogeography theory suggested that island communities draw their species from the larger number on the mainland, but that differences between islands could be chance, so adaptation is not required to explain in detail  differences in bird or plant lists for oceanic islands. Naturally, counter-examples followed, and today patterns are seen as a combination of the availability of species (or mutants), chance effects, and selection/adaptation. Darwin would probably have said, "yes, of course," because the problem has been obvious for a long time, but it is important to have satisfying models and detailed examples, and those are only slowly accumulating.
Events change the focus of botany as well. Toward the end of the 20th century, global warming was a theortical discussion. Now studies show several degrees of warming in the last 50 years in most locations and consequent changes in the plant community, for example earlier leafing out in the spring, onset of flowering days to weeks sooner, and the survival of plants and insects well north of their previously known limits. This was the change I particularly noticed at BSA2019; studies of the effect of climate change have replaced studies of, for example, the consequences of deforestation or habitat fragmentation. Even studies not directly about climate often included a comment about how changing conditions are impacting their system.

What did I hear at the meeting that was neat? Lots of things. For example,

Steven Pyne of the University of Arizona , in the lead-off talk, reviewed fire in North American ecosystems. It has always been an important force but we can expect changing conditions to intensify fires. The Forest Service is currently spending 50% of its budget fighting fires, which means it has little time or energy for asking how to reduce them. Furthermore, fire is not a single problem, but a whole series of regional problems; fighting fires in southern California where thousands of people live in a flamable environment is different from fighting fires in wilderness areas in Montana or in the Florida pinelands where fire is a traditional land management practice. Those are different not just because of climates and distances differ, but because local expectations and politics differ. Fire is so widespread that all of us in North America should be thinking about fire, its effects, and how to fight/live with it. (Title of talk Fire's American Century. Check out his books! link)
Two studies emphasized that botany can take you to exotic locations.

John Chau of the University of Johannesburg, South Africa , traveled to Marion Island in the Prince Edward Islands in the sub-Antarctic, where he compared a plant with no obvious dispersal means to one wind-dispersed. The former plant showed, as predicted, more clustering of its genes, as if seeds were only rarely exchanged between populations even 100 yards apart. He had a headstart to Marion Island since he was in South Africa, but to get to Marion Island takes a five day trip by ship from Cape Town. (Look on Google Maps at Marion Island--it is very remote. Photos Marion Island). Title of talk Seed dispersal syndromes and spatial genetic patterns of plants on a sub-Antarctic island. J. Chau and B. van Vuuren, link to lab)

Dylan Cohen of Rancho Santa Ana Botanic Garden in Claremont, California drove across Argentina and the next year across Chile, looking for plants in the genus Loasa (photo, aren't they pretty?) in order to understand their evolution. He found some rare species even more unusual and more threatened than previously known and used DNA to revise relationships between other plants. I liked the science and the challenge of getting the plants awoke my sense of adventure: Argentina and Chile are beautiful countries but both are very large. (D. Cohen, Herbarium Genomics: Testing for phylogenetic signal and assessing rarily in Chilean Loasaceae. link to lab.)
In contrast, Wendy Hodgson of the Desert Botanical Garden in Phoenix, emphasized looking carefully at what is nearby.  All thorough Arizona there are agaves (Agave species, Agavaceae) growing near archaeological sites that, when looked at carefully, are new species and likely were domesticated by one or several groups in preColumbian time. Agaves are major food plants, whether it is the new shoots, "hearts" or seeds (and more, link). These agaves make few seeds and had been propagated by humans, but fortunately a few hung on where they were planted, long after the site was abandoned. What else might be in plain sight? (Title of presentation Pre-Columbian agaves in the Southwestern United States: Disovering lost crops among the Hohokam and other Arizona cultures.  More: link to lab; link to publication Hodgson and Salywon, 2013 link).
Talks about Arizona ecosystems were common, since a meeting in Arizona is easy for Arizona scientists to attend. In college, I was fascinated that the ecosystems up the mountains of Arizona--desert, pinyon-juniper, pine forest, spruce-fir forest, tundra--moved up and down in the Pleistocene as glaciers advanced and retreated, warming and cooling the climate. The communities are called sky islands, because little patches of forest are isolated by the desert or grassland between them (link). Paula Marquardt of the Forest Service reported that the pines on top of some of the mountains had shifted their growing period from summer, as shown in the tree ring history of the area before 1950, to spring and sometimes, to winter. Her study focused on the relations between the two species of pine in the sky islands, Pinus ponderosa variety brachyptera and Pinus arizonica, but it was easy to imagine that if winter becomes too warm and dry, the trees will die. (Title of presentation:  Climate impacts on the genetic structure and annual growth of sky island pines. More: link )

In addition, there were posters. Speakers have to deal with stage fright, poster-makers with graphical design. Each method of presenting information has its strengths and weaknesses. I don't think of myself as a reporter, so I didn't take good pictures to showcase either the posters or the speakers, but it is very obvious with the posters. Sorry.

Tanisha Williams and coauthors analyzed the distribution of Pelargonium species (geranium family, Geraniaceae) in their native range, South Africa. Pelargonium is the very genus of the well known plants, geraniums. (See blog about geraniums). The authors determined the climates where of geranium species grow in South Africa and then applied models of climate change. All of the models predict shifts in the distribution of the plants; expansion of the range, contraction of the range and local extinction depending on the species. The information is important for South African plant conservation and the method can be applied elsewhere. Poster title: Using species distribution models to assess the impacts of contemporary and forecasted climate change on Pelargonium species throughout South Africa More:  link. 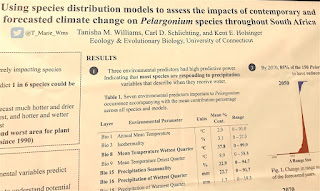 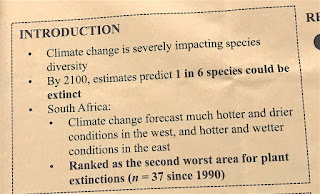 The study, below, by Katie Krogmeier of Appalachian State University and coauthors links two hot topics, climate change and polyploidy. It began with the observation that tall goldenrod (Solidago altissima, altissima means "tall", sunflower family, Asteraceae) growing in the eastern U.S. are diploid (9 pairs of chromosomes), while those in the midwest are tetraploid (18 pairs) or hexaploid (27 pairs). Since the midwest is both drier and more prone to drought than the east, maybe polyploidy confers some kind of water efficiency. The study so far did not find a polyploidy-related but, as is usual, more needs to be done to provide a definitive conclusion of "no relationship". (Giving progress reports is normal at meetings. So are glitches so that the results expected when the project was submitted to the meeting, in April, are not ready in July.) Poster title Investigating potential impacts of polyploidy on the ecophysiological reponses of  Solidago altissima to climate change; link to lab. 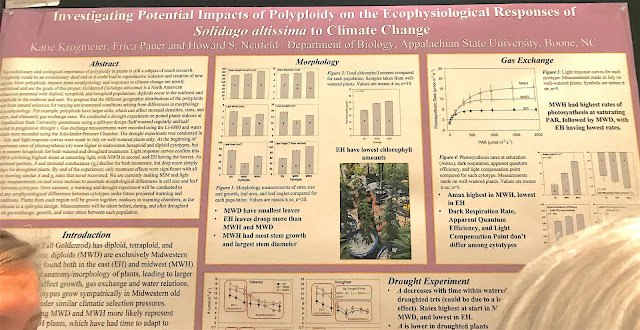 Brassica oleracea is the amazing plant that gave us cabbage, broccoli, Brussles sprouts, and of course kale. But there is kale on the island of Jersey (blog) and Chinese kale, so is it likely that it was domesticated only once? E. Y. Gallagher and colleagues investigated. And indeed, plants we call kale are not all closely related to each other and probably were domesticated more than once but generally around the Mediterranean. To get a better look at the research, check out the lab (Poster title: Origin of Brassica oleracea: a story of wild relatives, Mediterranean domestication and multiple origins of kales, for more see Pires at U. Missouri link) 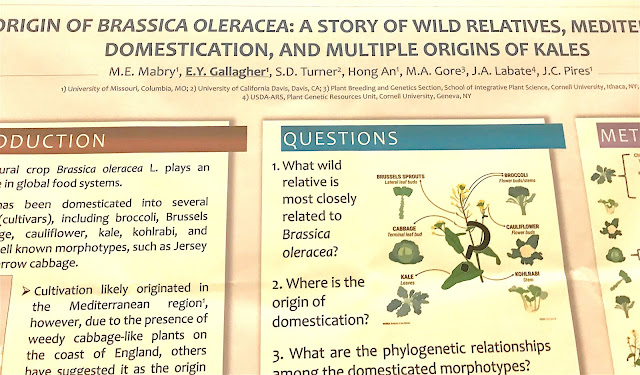 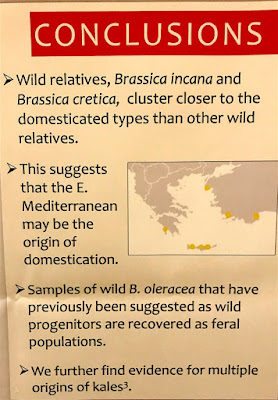 And, finally, the pawpaw, Asimina triloba (soursop family, Annonaceae) is a North American endemic. Graham Wyatt and Dorset Trapnell of the Univerity of Georgia looked at the genetic variation in populations throughout its range (from Florida to southern Ontario). It has the largest edible fruit in the Americas and it is hard to imagine how those big fruits moved the plants north as the ice retreated at the end of the Ice Ages. The answer appears to be: people. The northernmost populations are associated with preColumbian settlements and had the lower genetic diversity characteristic of cultivated plants. Full poster title, Comparison of anthropogenic and wild populations of Asimina trilby (Annonaceae) (L.) Dunal. More at (link). 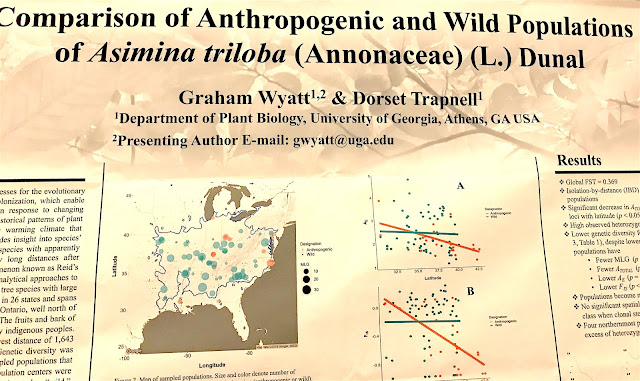 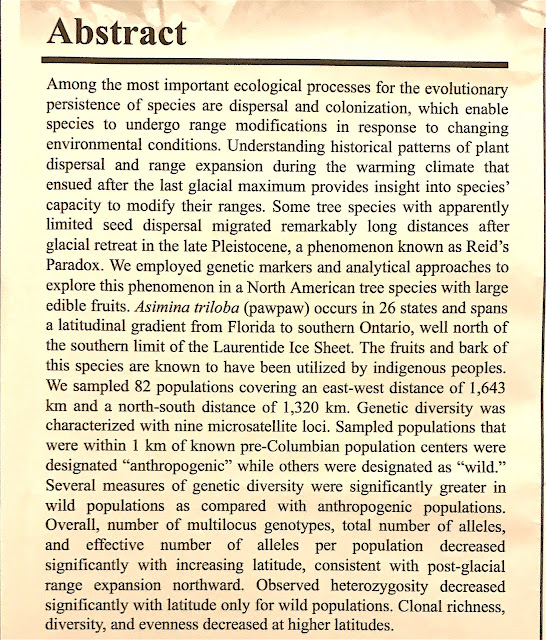 And the impact of humans is another change in the way botanists look at the world today, as compared to 1969. In 1969 we thought some places were pristine, the distribution of plants unaffected by humans. But story after story tells us that humans rearranged plants all over the world. In this meeting alone were these tales above, of planting pawpaws in the forests of North America, domesticating agaves in the southwest deserts, and carying kales all over Eurasia. Even deep in the tropical rainforest or high in the mountains of Tibet, humans have selectively gathered and planted plants for thousands of years. Maybe there are cliffs or isolated oceanic islands where you don't have to ask, "could this pattern have been modified by human activity?" but very few indeed.

Lots more for botanists to do!


Posted by A Wandering Botanist at 1:40 PM