The name Commelina was given to these flowers by Linnaeus, in honor of three Dutch botanists. What Linnaeus wrote, actually, was "Commelina has flowers with three petals, two of which are showy, while the third is not conspicuous, from the two botanists name Commelin, for the third died before accomplishing anything in botany."(Stearn p.100.) Who knew Linnaeus had a sense of humor.

Dayflowers are in the plant family Commelinaceae, which is named after them. Often the Commelinaceae is called the spiderwort family. Spiderworts (Tradescantia species) look a lot like dayflowers, but have three large petals, not two. Compare spiderwort flowers to dayflower flowers in my photos. Once you learn dayflower flowers, they are easy to recognize, and they can be encountered all over the world.
Whitemouth dayflower, Commelina erecta, is an American native plant found in all of the United States except the northwest. It has a pale, white, reduced third petal (see photo) and a tends not to sprawl. Asian dayflower, Commelina communis, has approximately the same distribution but it was introduced from Asia. It is the one in my photos, with no sign of a third petal and creeping across the ground. It is more common than whitemouth dayflower. There are two other species in the United States that I do not personally know, birdbill dayflower, Commelina dianthifolia, a native of the U.S. Southwest and climbing dayflower, Commelina diffusa, native to the Southeast, extending into some plains states. (See USDA plants website, link). The Bengal dayflower, also called tropical spiderwort, Commelina benghalensis, is reported from a few sites in Arizona, Texas, and Florida and is considered an invasive weed. 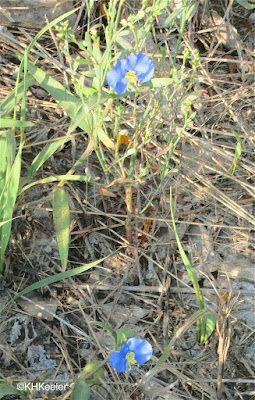 Dayflowers have no nectar for pollinators, only pollen. Each flower is quite ephemeral, open for only a few hours before closing forever. Small bees collect the pollen but the plants probably mostly self-pollinate. But, as you can see in my photos, the flowers are not clustered on the plant, which means a bee collecting pollen has to take flight to find a second flower, which facilitates cross-pollination.

I used to prefer plants that make good cut flowers. Dayflowers rate very low on that list since the few buds on each shoot open several days apart. That means you can't even make a decent flower arrangement by, as with iris, picking a stem with lots of buds which open in subsequent days. That may work out to the plant's advantage, since flowers picked for bouquets never develop any seeds. 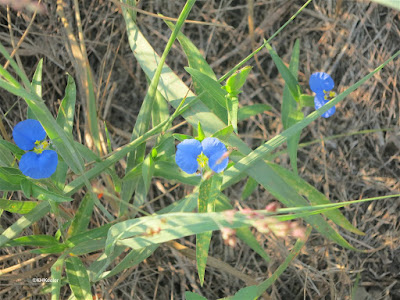 Dayflowers are reported as edible, but Deane of Eat the Weeds was not enthusiastic and I do not find them in any of my many books on edible wild plants.

Ah, but they are such a joy when you see them in the grass.

Posted by A Wandering Botanist at 1:05 PM