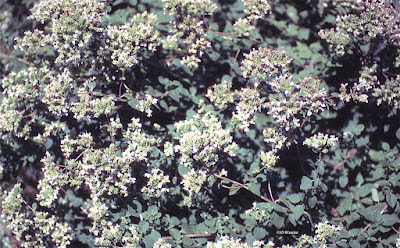 Current North American usage calls Origanum vulgare "oregano" but older or British sources often say "marjoram, Origanum vulgare." They suggest that the plant known to them as wild marjoram is now commonly called oregano, a word borrowed from Spanish or Latin. Thus, the name "marjoram" by itself, without the scientific name or an adjective (such as "wild marjoram" or "sweet marjoram") is ambiguous and could mean any of several related European species. At the same time "oregano" can mean the unrelated Mexican oreganos (Lippia graveolens and Lippia palmeri, verbena family, Verbenaceae) or Syrian oregano Origanum syriacum. If you like the flavor of oregano, get to know all the oreganos and marjorams. 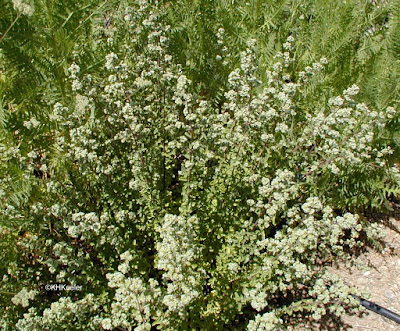 My common oregano grew into a pretty plant. It survived the winter--a surprise because Nebraska and now Colorado are much colder than southern Europe--and gently seeds into surrounding flowerbeds.

Common oregano plants vary in flavor intensity and do not breed true; plants from seeds may not be as tasty as the parent plant. Consequently, if you plan to cook with your oregano, take a cutting from a great plant and root that. It roots pretty easily. 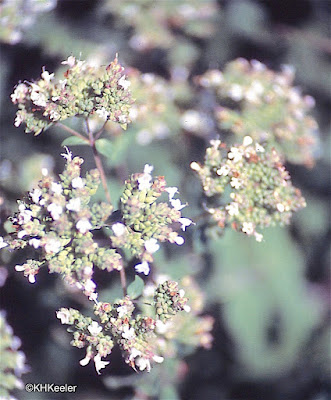 The flavor is famously necessary in pizza sauce but also used in meat and tomato dishes. Oregano essential oil is a flavoring in some liqueurs. Mexican and Southwestern cooking often prefer the Mexican oreganos to common oregano of Europe.

The common name pot marjoram refers to its use as a vegetable ("pot herb"). The tops and new leaves can be eaten, raw or cooked.

My plants mostly have uninspiring flavors, so I grow them for their beauty and buy the spice.

And they are beautiful. A nice rounded shape, cute slightly fuzzy leaves, white flowers. (Some varieties have handsome pink-purple flowers.) 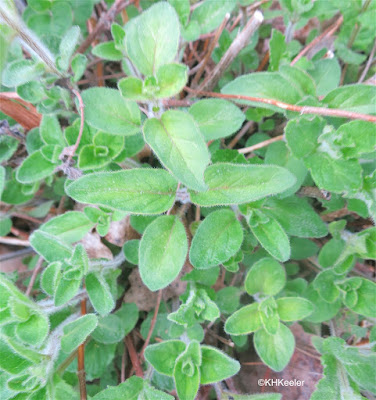 Oregano has been used for two thousand years in Europe, likely longer, as a flavoring and as a medicine.

Dioscorides, a very influential Greek physician working with the Roman armies in the first century, wrote that it is warming, and good for those who are poisoned, describing treatments if bitten by poisonous beasts (oregano in wine), or poisoned by water hemlock or poppy juice (oregano as or in raisin wine) etc. For convulsions he would give it to the patient with figs. He used it in concoctions to make the patient vomit. The juice cured ear pains. It cured coughs when licked in honey and in a bath was good for itchy skin and jaundice...and so on.  Strewed on the floor, it expelled serpents.

More than 1000 years later, Nicholas Culpeper, in a book of medicinal plants written for the public not doctors, wrote, "there is scarcely a better herb growing for relieving a sour stomach, loss of appetite, cough, consumption of the lungs." He repeats many of the remedies of Dioscorides and recommends a conserve of oregano (1 part pounded fresh leaves to 3 parts sugar) for flatulence, indigestion, and other disorders of the stomach. 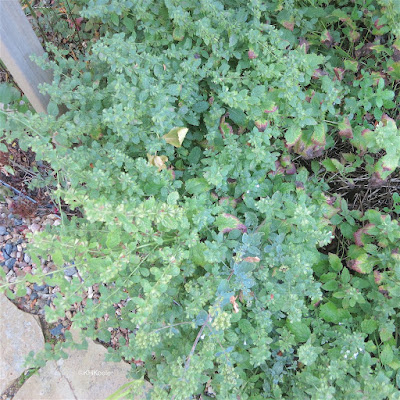 Modern chemistry finds common oregano has many of the same compounds that are found in sweet marjoram, thyme (Thymus species) and rosemary (Salvia rosmarinus), including carvacrol, thymol and rosmaric acid. These compounds have been shown to have antibacterial and antifungal properties and some anticancer effects.

In European folklore, oregano was used in love potions; feeding it to a lover strengthened their love. Dried oregano and violets, in an amulet, were worn in winter to prevent colds. A few leaves in each room, renewed monthly, protected the house from evil. Similarly growing oregano protected the garden. while carrying it protected a person and, if the person was depressed, brought happiness.

It is a good companion plant, repelling insect pests and reportedly improving the growth of virtually all vegetables. It imparts a pleasant taste to the milk of dairy cows. The flowers attract many bees and butterflies. 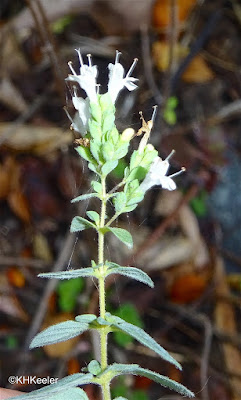