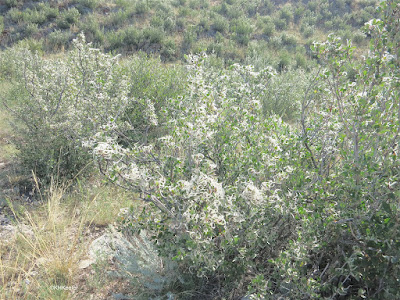 Mountain mahogany, Cercocarpus montanus (rose family, Rosaceae) is a native shrub or small tree of the foothills of the Rockies and across the western U.S. It is not related to the tropical mahoganies (genus Swietenia, chinaberry family, Meliaceae) except in the sense that the common name reflects the color and luster of the wood.

There are eight species of mountain mahogany, four in North America, the others in Mexico. The species recognized in Cercocarpus differ between authoritative publications, apparently because the plants vary a lot in characteristics like leaf shape and have not received much study.

The leaves are small and a leathery dark green, with a rounded shape that seems somehow incomplete. The pale yellow flowers, in late spring to early summer, are small (less than 1/4" across) with a lovely sweet scent.

The fruits are dramatic. They contain a single seed and develop 2" long curled, feathery "tails" (awns) that assist the seeds in floating away from the tree. The scientific name, Cercocarpus, is from the Greek kerkos, a tail, and karpos, fruit, thus, "tailed fruit. The long awn curls in humidity, straightens as it dries out. Lying on the ground, drying, the straightening of the awn drives the seed into the ground. Very neat.
Mountain mahogany is a colonizer of poor soils because it forms root nodules for nitrogen-fixing bacteria. This is unusual.  The air has lots of nitrogen which living things require for DNA and proteins, but no higher plant or animal can turn any of that atmospheric nitrogen into usable forms. Nitrogen flows into biological systems through bacteria. They convert more than they need and plant roots pick up the leftovers and animals eat the plants. Some plants provide nodules for nitrogen-converting (nitrogen-fixing) bacteria, giving them a protected place to live and access to carbon and micronutrients from the plant (see more link). Most of the plants that have nitrogen-fixing bacteria in root nodules are the legumes, pea family, Fabaceae. But this relationship is found in a few other plant species, including the mountain mahoganies. Consequently, mountain mahoganies can grow on nitrogen poor soils where other plants cannot.

Despite having their own source of nitrogen, mountain mahogany plants grow slowly. The trees can reach 20' in height and may spread over 20' laterally, but plants that big are uncommon. They put down a deep root system and, once established, are tolerant of dry and droughty conditions.

Mountain mahogany is edible to browsing animals, so edible it is an imporant part of the diet of elk, bighorn sheep, deer, cattle, sheep and goats, both as leaves and, in winter, twigs. Ranchers call it sweetbrush, recognizing its palatability. It is the host plant of at least 19 species of native moths and butterflies. 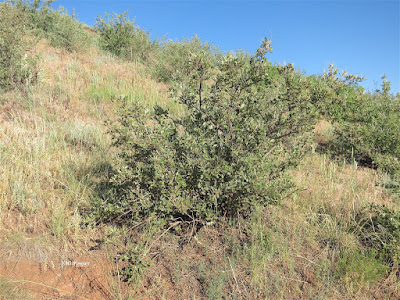 The name mountain mahogany is out of respect for its wood. The wood is hard, deep brown to red brown, and polishes to a lovely shine. Slow growing and tending to twist, there are few trees big enough for making furniture, but for spoons and other small items, it is a prized wood. But hard; cutting it up requires patience and a sharp saw. As far as I can determine, it is the densest, hardest wood in North America (Janka hardness rating 3,200 lbf), harder than osage orange (Maclura pomifera); and dense, the wood doesn't float in water, it sinks (specific gravity 1.11, water is 1.0).

Native Americans used it for all sorts of tools, from digging sticks to prayer sticks. The Navajo name means "wood heavy as stone." It was a preferred wood for tool handles. Mountain mahogany artifacts of the Ancestral Puebloans include a hoe at Mesa Verde and a batten (for tightening the weaving) at Canyon de Chelly. Despite its brittleness, it was worked into recurved bows. The Tewa made boomerang-shaped throwing sticks used to hunt small game, and Mendocino Indians in California made it into war clubs and spears. Mountain mahogany made good arrows, but rarely grew straight enough for that. It was hard enough to be carved into arrowheads by a number of tribes. A variety of weaving tools were made from mountain mahogany, from distaffs to weaving combs. It was the  Navajo wood of choice for carving dice.

Mountain mahogany had uses beyond its wood. Tribes across the southwest used the root bark to make  brown and, in combination with alder and wild plum root bark, red dye for leather and baskets.
Leaves or roots and bark were used tribes in the Southwest to treat upset stomachs and disgestive discomfort. Ramah Navajo hunters chewed leaves from mountain mahogany trees that had browsed by deer for good luck hunting deer. It was also taken as a "life medicine" tonic.
Mountain mahogany grows densely along north-facing slopes in Devil's Backbone Open Space in Larimer County, Colorado. The area was quarried for gypsum from 1915 to 1965, so likely they colonized a cool slope of poor soil sixty years ago. Perhaps in 100 years they will be tall enough to seem a forest not a shrub-covered hillside.

You can tell I like mountain mahogany: it is interesting, pretty, and useful.

Note: Plants in virtually all the 766 genera of legumes (Fabaceae) host nitrogen-fixing bacteria, and members of 25 more genera scattered across 9 other plant families, out of 13,000 genera in the world's 413 plant families. The genus Cercocarpus, mountain mahoganies, is one of that small group.