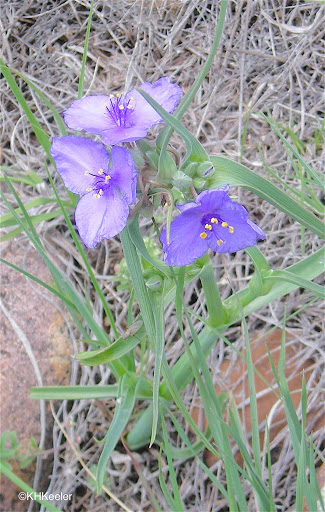 Spiderwort, Tradescantia (spiderwort and dayflower family, Commelinaceae), is a native wildflower. The flowers come in shades from blue to white or pink (much color variation within species). Spider in the name refers to the visual effect of looking spidery, wort is an old word meaning plant.
Here it is looking spidery: 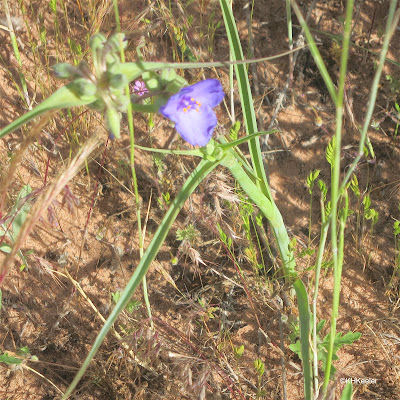 There are 30 species of Tradescantia in North America, 75 in the world, all from the Americas. Of those native to the United States, 20 species have very limited ranges (they are especially numerous in Texas), only 5--longbract spiderwort, T. bracteata, western or prairie spiderwort T. occidentalis, tall spiderwort or bluejacket, T. ohiensis, zigzag spiderwort, T. subaspera and Virginia spiderwort T. virginiana--are very widespread. In North America the genus is mainly in the east and southeast. The ornamental plant, wandering-jew, is a south American Tradescantia, T. zebrina. It is sufficiently weedy that it gives all Tradescantia species a bad name. Other species have become problem invasives elsewhere in the world, for example in Australia (example).

However,  the North American native spiderworts with which I am familiar (prairie spiderwort,  longbract spiderwort, and bluejacket) are not very aggressive. They can and do spread, sending a rhizome along the ground so that a shoot pops up at a distance, but they do not form thick clumps or smother other plants, rather integrate themselves into the plant community.

They will flower all summer if conditions are good. The flowers are bright, whether blue or pink. (In the "old days" of cameras with film, spiderwort was one of the flowers that fooled the film--or the eye--because a plant would photograph much pinker than it had looked.) Individual flowers only last one day. They open early but fade in the heat of the day. The beautiful display of color in the morning light is gone by late afternoon. Get out early to enjoy them.

Native Americans used spiderwort to treat a number of conditions, from stomachache to infections to "craziness". It was also food, the shoots eaten alone raw or cooked, or combined with other grins. 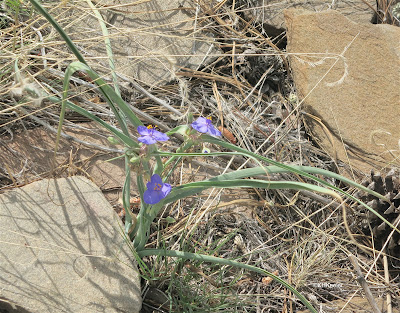 Spiderwort has one of the oddest uses I know: as an indicator of ionizing radiation. X-rays and gamma rays will turn the blue hairs of the stamens, pink. The blue color in those cells very easily mutates when hit by ionizing radiation, turning pink. Thus, they have been used as bioassay to detect the presence of radiation. I don't have a good photo to show the little hairs along the stamen, but they make the filaments leading to the yellow anthers look fuzzy. (flower parts diagram link). Beyond stamen hair mutations, spiderwort plants appears particularly sensitive to ionizing radiation, growing very poorly where much is present, so are a good general indicator species for radiation.
The various species of spiderwort, from different parts of the Americas, rather easily hybridize, creating hard-to-identify intermediate plants.
From the spidery look and blue or purple 3-petaled flowers, spiderworts readily recognized, even when you are traveling far from home. Watch for them.
Comments and corrections welcome. 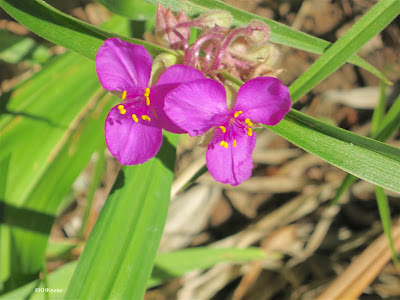