Turmeric (Curcuma longa, ginger family, Zingiberaceae) is a spice produced from the ground rhizome of a tropical ginger. In the previous blog (link) I talked about its origins. I knew it as a  yellow powder used in curries, but little more. In fact, it has been a minor herb in European and North American cooking, but incredibly important plant in Asian life and an intense, fugitive yellow dye.
Turmeric has a pleasant and distinctive flavor and scent, contributing to its role in foods, but in India, Southeast Asia, and Oceania it was probably the premier ceremonial plant. Turmeric water or turmeric paste was used as a protection, either by applying it to the individuals or by securing the space by sprinking or spitting it over the area. It seems to have been used in most ceremonies and to be a critical part of some, particularly child birth and marriage. Turmeric water purified both people and spaces. In India, newborns, their mothers, brides, grooms, and others were rubbed all over with turmeric paste, which, beyond its ceremonial and religious significance, cleaned the skin without drying it out. The golden color was a plus, leaving the skin slightly golden.

Ethnobotanists suggest that the intense yellow color from the powdered rhizome was critically important to the rise of turmeric as a ceremonial and magical plant. Turmeric was linked to sun gods and through them to the daily and yearly cycle. Turmeric was also sacred to earth goddesses, perhaps because some tropical soils are intensely yellow. Furthermore, its color is that of ripe fields of rice. Since much of India and Southeast Asia depends on rice, it was used in agricultural ceremonies and rituals for successful harvests and the ensuing prosperity.

The turmeric plant has stringent conditions for good growth, preferring shade, very warm temperatures, and more than 40" of rain a year, but, in those conditions, it grows very vigorously. This attribute added to its ceremonial powers; other crops, rice in particular, were ceremonially urged to grow like turmeric.

All across Hindu India and wherever Hindu influence has reached, rice colored yellow with turmeric is a symbol of prosperity and essential in ceremonial situations from religious offerings to feasts and festivals.

Other cultures also took up turmeric for its color. It is thought to be one the yellow spices used in Persian sun worship. In Polynesia, Micronesia, and Hawaii, turmeric in sea water consecrated and purified sacred places and objects.

The powdered rhizome makes an intense yellow dye, important for dyeing cloth from India to Hawaii. Young tubers make an intensely bright yellow, older tubers a deeper golden yellow. It is the only known natural material that will dye cotton without a mordant, and likewise strongly dyes other bast fibers such as linen and Hawaiian tapa cloth. (Mordants are metal ions, of aluminum and iron for example, that link the colored molecule to the fabric; without them most plant dyes immediately wash away.)

Because no mordant is needed, turmeric is easy to play with as a dye. I took the spice from my kitchen cabinet, added about a tablespoon of it to a gallon of distilled water, added cotton thread and cotton cloth, heated 45 minutes and got the wonderful intense yellow above.

However, with about two teaspoons of baking soda, the dyebath turned reddish and white cotton dyed a rusty shade. (You can see a reddish tinge; the thread shows it best).

Here (below) is the cloth and thread compared after they dried. The alkaline dye bath made a very irregular color, apparently I didn't do enough stirring, and is an odd shade, a pale reddish tan. The neutral (or acidic) dye bath created a yellow so intense it practically glows in the dark.
Turmeric dye is famous for being very bright and then quickly fading in the sun or in contact with alkaline substances. Ethnographers imply that in India, Southeast Asia and Oceania, turmeric wasn't much used for ordinary clothing, but rather dyed ceremonial pieces and garments. When I asked in Hawaii, the local botanist and dyer agreed that yes it faded, but the items could easily be redyed. I imagined that as part of the preparation for an upcoming ceremony; redyeing.

Here I tested the reported pH sensitivity for myself. This old pillowcase is the one I dyed with turmeric in an alkaline solution. I dropped a drop of vinegar on it. You can see the big yellow circle (lightly outlined). Wherever it spread, the vinegar changed the mottled reddish background to bright yellow (actual size of dot about 2"). You can also do the reverse: alkaline drops create red from turmeric-dyed cloth that is yellow (see below).

However, traditional dyeing with turmeric in Asia was not simply powdering it and making a dyebath like I did. The rhizome might be roasted and a variety of other materials added to the dyebath. A book on traditional Hawaiian dyes said that although pieces dyed with commercial turmeric powder faded, that was not the case when the dye was made with rhizomes of 'ōlena, the traditional Hawaiian turmeric variety. Dyers also list several after-dyeing treatments that help. Nevertheless, I have not seen anyone claim to have truly succeeded in making turmeric-dyed cloth colorfast.

You can read that turmeric produced the saffron-colored robes of Buddhist monks, and given the importance of turmeric in India in Buddha's time and since, that seems reasonable. However, across the Buddhist world, robe colors vary greatly, so, at best, some of the robes were and are dyed with turmeric, usually blended with other dyes and substances.

The color transformation--turmeric forming a strong yellow in an acid or neutral solution and turning reddish brown if the solution is alkaline--has been known a very long time. Chemists took advantage of it to create indicators, which will easily tell you whether a solution is acid or alkaline (basic). You can do it with solutions (demo online link). Liquids not being particularly convenient, chemists invented turmeric paper, which is made by drying a turmeric solution on paper. The paper, or the solution, is yellow when it is acid, reddish when alkaline and has the very cool property can be used to determine the neutral point (pH 7), because that is when the red turns yellow (or vice versa).

Here I used the cloth I had dyed as if it were turmeric paper. I made soapy water (alkaline) and put a drop on the previously-dyed cloth. It turned the spot a deep reddish shade. Acids like vinegar made no change.
Turmeric is a very common colorant today. It is GRAS (generally regarded as safe) in the US, a legal status that makes it safe as a food additive. (GRAS is applied to lots of common foods, eaten safely by lots of people for a long time link). Consequently turmeric is widely used where yellow is wanted, for example in mustard, pickles, canned drinks, baked goods, candy, icing, cereals, milk products, cheese, gelatin, sauces, curries, waxes and more. Since it doesn't need a mordant on plant fibers, it is also used to color paper and wood.


As mentioned in the previous post, turmeric has a variety of medicinal uses and very low toxicity. Adding it to your foods will turn them yellow (or red). Or try it on your skin, it cleanses and disinfects (see lots of online suggestions). Dye cloth with it, just don't expect the color to last. Don't leave it just sitting in your spice cabinet.

Check out my books (on Amazon) with collected stories of familiar plants: 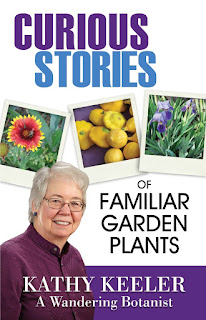 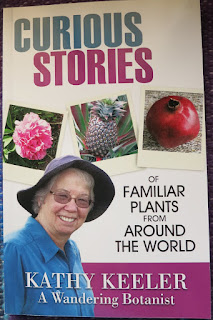 Posted by A Wandering Botanist at 1:29 PM