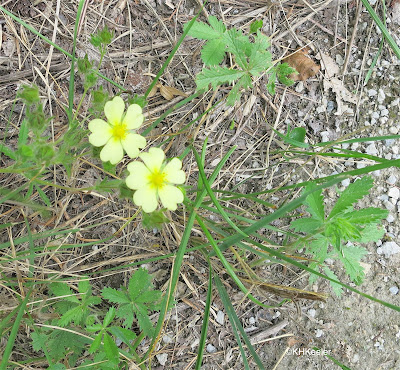 Cinquefoils were medicinal and magical plants in Europe. They are a group of plants in the rose family (Rosaceae) with pretty five-petal flowers, usually yellow, and distinctive leaves with five lobes like a hand. The common name, cinquefoil, means five-leaf in French. Old English names included five-finger grass (grass meaning "plant" in this context), but some species had distinctive names, for example silverweed and tormentil. 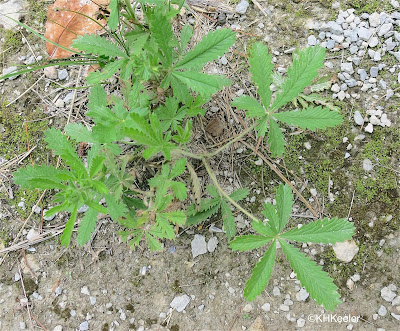 Many cinquefoils are in the genus Potentilla, a name for them that comes from the Romans, meaning potent, since they were considered strong medicine. Today, many species formerly called Potentilla have been separated out into other genera, such as Argentina, Dasiphora, and Comarum. Even so, there are more than 400 species in Potentilla, worldwide. About 70 species of Potentilla are native to North America and most of the important European ones have been introduced.
From at least the Roman era, cinquefoils have been medicines. The whole plant contains tannins and is astringent, the roots stronger than the leaves. The preparations of the plant were applied externally to cuts, and solutions gargled for a sore throat or taken internally for fevers, cramps of the stomach, diarrhea, and hot tempers. Cinquefoils treated many other ailments and were taken as a healting tonic. These uses apply especially to the European silverweed cinquefoil (Argentina (Potentilla) anserina) and tormentil (Potentilla erecta), although other cinquefoils have been used medicinally as well. They can be so astringent as to be damaging and don't appear in most current medicinal plant lists (see Plants for a Future's pages link). Silverweed is apparently native all across the Northern Hemisphere while tormentil is largely confined to Europe. Silverweed has silvery hairs on the underside of the leaves, and usually seven or more leaflets per leaf rather than five, so it is a very distinctive cinquefoil.
Beyond medicine, the roots of silverweed were an important root vegetable in Europe from prehistoric times up to the introduction of the white potato (Solanum tuberosum). They were eaten raw and cooked or ground to a flour used in porridge and bread.
Cinquefoil roots could be so astringent that they were used for tanning leather (tormentil and others more than silverweed) and supported that industry in parts of Europe where there were few trees to supply tannin.
The roots of tormentil also make a red dye. 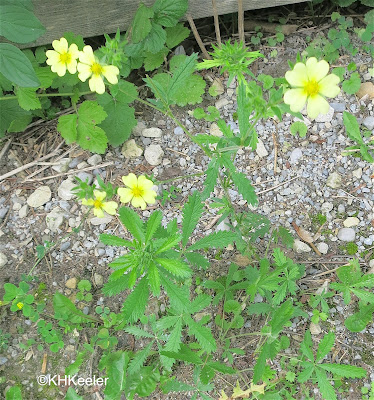