Cinquefoils are cute little flowers, usually yellow, in the rose family, Rosaceae. Traditionally they were in the genus Potentilla. Shrubby cinquefoil of the northern and western North America (see USDA map link) was for many years called Potentilla fruticosa. It is easily distinguished from the 68 native and 8 introduced species of Potentilla in North America because it is the only woody shrub, not a non-woody herb. Then, some years ago, DNA and other evidence indicated that shrubby cinquefoil and the other cinquefoils that are shrubs (11, all from Eurasia) were pretty different from other cinquefoils, so they were reclassified into another genus.
Many North American native wildflowers have received new scientific names in the last twenty years. That is partly from new information based on DNA and partly from broader geographic study. What were taken to be the same genus (group of species) in North America as in Eurasia are often found to be only superficially similar, so experts split them into two (or more) separate groups (genera). When they do that, it is almost always the North American plants that get a new name, because the rules of priority in botany keep the familiar name with the first plant named that, which is almost always European.
Even though learning a new scientific name for a familiar plant is annoying, usually it is pretty straight-forward. That is not the case for shrubby cinquefoil. The Flora of North America called it Dasiphora fruticosa (link). Other references (Weber and Whittmann, Colorado Flora 2012, Kershaw, Mackinnon and Pojar Plants of the Rocky Mountains (published by Canadians in 2016)) called it Pentaphylloides floribunda. Ackerfield, in the Flora of Colorado, published 2015, called it Potentilla fruticosa, ignoring the split of the genus. Whether or not it is Potentilla or not depends on whether you think shrubby cinquefoil is "different enough" from nonwoody cinquefoils to be in a different genus. Most botanists do. Whether it is Dasiphora or Pentaphylloides is part of an argument questioning each name. If the original Dasiphora or Pentaphylloides was not a shrubby cinquefoil but an herbaceous cinquefoil, then the name shouldn't be applied to shrubby cinquefoils. Both sides of the argument say their name is ok and the other was originally put on an herbaceous cinquefoil. I don't care to study plant specimens from the 1800 to draw my own opinin, so I will follow the Flora of North America and the USDA Plants database and call shrubby cinquefoil Dasiphora fruticosa--but be aware this argument is ongoing.
(The species epithet floribunda used in Pentaphylloides floribunda was the original species epithet as Pentaphylloides and so supercedes fruticosa if you go with Pentaphylloides)
Potentilla is from the Latin potens, powerful, because the plant was believed to have significant medicinal powers. Dasiphora is based on dasys, Greek for "hairy" and phoros "bearing", which is meant to be interpreted, "having a hairy hypanthium" (the hypanthium is the cup or structure that surrounds the flower See link for diagram).
Pentaphylloides means "five-leaf". The species epithet fruticosa means "shrublike" and floribunda means "producing abundant flowers." 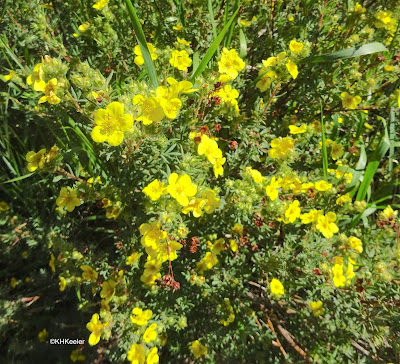 These are hardy little shrubs. Shrubby cinquefoil is native to a vast area, across northern Europe and northern Asia to North America. In North America it is found all across Canada and south to New Jersey, Ohio, Illinois, Iowa, South Dakota, New Mexico, Arizona and California, from sea level to over 10,000 feet (USDA plant zones 2-8). Over that area it varies in leaf form, flower size, chromosome number, and more, but without forming the kind of distinct groups that would be recognized as different species. As an ecologist, I admire that; this plant spread across the world, adapting to the different climates it encountered. Some plants do that by forming lots of local species, others, like shrubby cinquefoil, do it without losing the ability to produce seeds between the various forms. (And that crossing creates more variation to intrigue botanists.)

The Eurasian, nonwoody, cinquefoils are strongly astringent and were used medicinally for applications such as to relieve stomach cramps and toothache. Despite its Eurasian range, shrubby cinquefoil does not appear as an Old World medicinal plant nor can I find it as a medicinal in my North American medicinal plant books. Moermann's Native American Ethnobotany online data base (link) lists an array of uses for shrubby cinquefoil but none medicinal, other than that Alaskan Eskimos made tea from it. The Blackfoot used dried leaves as a spice but the Cheyenne considered it poisonous. The Blackfoot also used the leaves to fill pillows and found the flaky bark effective as tinder for starting fires.
But it has pretty flowers and grows as a shapely shrub so it has been used as a landscaping plants for decades. There are varieties with white and pink flowers, as well as the usual yellow. The flowers attract large and small bees and butterflies.
Browsing mammals, such as elk, deer, and horses, generally avoid shrubby cinquefoil. Consequently, when it is significantly browsed, it indicates to land managers that there are too many animals in the area for the forage. Since it holds its leaves into the winter, it can be important bad year food source for animals on the range.
Birds and small mammals like mice and voles eat the seeds. It is the host plant for the dorcas copper butterfly, Lycaena dorcas (Lycaenidae), also called the cinquefoil copper (more: link) and the Nevada buckmoth Hemileuca nevadensis (Saturnidae) (link). Given the large range and abundance of the plant, it probably feeds many other native insects.
The five-petal, rose-like flowers and divided leaves ususally in fives make cinquefoils distinctive.  There are dozens of species of nonshrubby cinquefoils in North America but only one shrubby species, so it is easy to recognize. If you don't know it, watch for it. 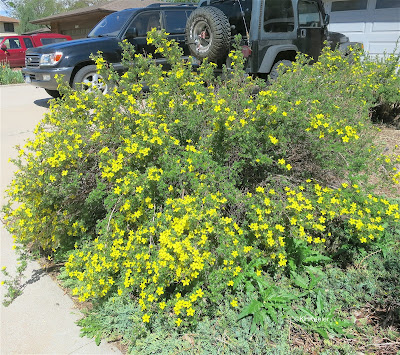