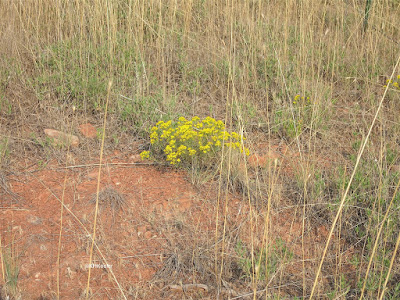 It's a pretty plant. Its name is a mouthful, broom snakeweed, Gutierrezia sarothrae, sunflower family, Asteraceae.

Broom snakeweed, also called matchweed (matchbrush and matchwood), kindling weed, and broomweed, escoba de la vibora in Spanish, is a plant of disturbed dry places in western North America, its bright yellow flowers appearing in late summer. The broom name comes from its use as a brush or broom, by settlers and before them by Native Americans such as the Comanche. The compact rather strong set of stems sweep well. The name snakeweed is because people across the West used it to treat snakebite, including snake-bitten sheep. Or you can call it matchweed because the flowers are described resembling matchheads and/or because its small resinous twigs make excellent kindling. 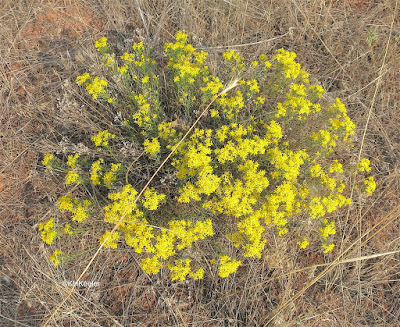 The scientific name is for Spaniard Pedro Gutierrez (biography: scroll down link), recognizing the important role of broom snakeweed as a medicinal in the Hispanic communities of the Southwest for centuries. However none of the English sources I checked could place Gutierrez, for example, no dates when he lived. A search in Spanish found Pedro Gutierrez Bueno, well-known apothecary, chemist, and pharmacist (1745-1826) who was working in Madrid at the same time as Mariano Lagasca y Segura (1776-1839), the man who named the genus Gutierrezia. Thus, I think Gutierrezia was named for Pedro Gutierrez Bueno (biography).

The species epithet sarothrae is from the Greek sarum (or sarotan I can't read Greek to check it), meaning a broom.

It is found from northern Mexico to Canada, across the western US, and east to Minnesota (USDA map link). It has been called the most widespread range weed in North America. 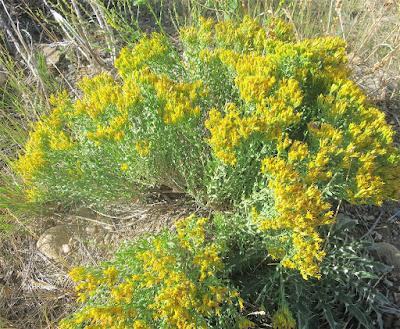 The plant was an important medicinal for Native Americans. It has a very long (two-column) entry in Moerman's Native American Ethnobotany. Tribe after tribe used it for ailments from colds, fever, aches including headache, stomach and eye problems, rheumatism and easing childbirth, reducing swelling, healing cuts and to treat bites from scorpions, bees, and snakes, as well as a general tonic. It was included in religious ceremonies, perhaps because of its beauty, perhaps because of it uses, probably both.

Bothered by a bee, the Jemez of of New Mexico chewed at bit of broom snakeweed and spat it on the bee, which reportedly killed it.

The medicinal uses of broom snakeweed were picked up by the settlers in the Southwest. Moore in Medicinal Plants of the Mountain West listed it especially as a bath to ease aches and pains. The plant contains antibiotic and antitumor compounds but has received very little scientific attention from modern science.

The medicinal properties mean that foliage is relatively toxic. Cattle and sheep avoid it. Consequently broom snakeweed increases on overgrazed pastures, in fact, a dense stand of it is used by rangeland ecologists as an indicator of overgrazing. When animals have no option but to eat broom snakeweed, they poison themselves. It causes abortion of fetuses and under extreme condition, death of adult animals. Not surprisingingly, the range literature features how to eliminate broom snakeweed.

On the other hand, broom snakeweed leaves are a major food of pronghorn and black-tailed jackrabbits. Grassland birds and small mammals eat the seeds. It is the host plant of at least nine species of native moths and butterflies. 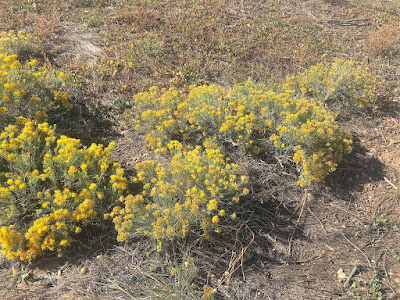 I think it is a pretty plant. I like the generally round in shape and the dense cover of bright yellow flowers in late summer and fall. People in range country can find lots of broom snakeweed growing wild but in more urban areas, it can make a pretty garden plant. It is quite drought-tolerant and individual plants can live more than ten years. 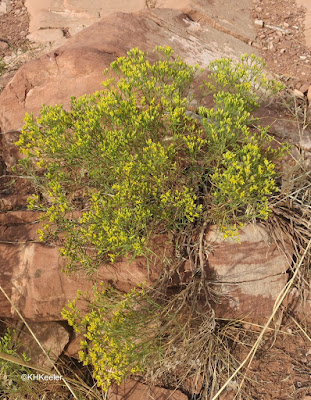 Posted by A Wandering Botanist at 3:09 PM