Big bluestem, Andropogon gerardii (grass family Poaceae), was once the most common plant across the whole center of the United States because it was the dominant grass of the tallgrass prairie. Alas, that same region grows wonderful corn, so the tallgrass prairie is 99% gone, and big bluestem is no longer very common.

It remains an important forage grass. The new shoots are very nutritious and very attractive to cattle. Where cattle have enough space, big bluestem does well. If the pasture is small, they preferentially graze it until none is left. Range mangers try to maintain big bluestem or reseed with it.

Big bluestem can be 6' tall on a wet year, so roads departments are not excited to have it along roadsides, the refuge of many tallgrass prairie plants. Often big bluestem is more like 3-4' tall, however. You see it planted sometimes as an ornamental grass, but it tends to get tall and then flop over, not what gardeners usually want.

What is this grass? First, big bluestem is rarely blue. More often it is reddish or red-brown. I have seen it looking blue on sand dunes in Michigan, so it can be blue, but don't look for blue to recognize it. The term big is because there is a little bluestem (Schizachryium scoparium), a bunch grass which rarely gets more than 3' tall.  Little bluestem was for many years called Andropogon scoparium, so calling them big bluestem and little bluestem made more sense than it does now. (Little bluestem is more often red than blue too, by the way.)

The seed heads of big bluestem are distinctive; they make three, sometimes more, finger-length stalks from a central point. Pioneers called it turkeyfoot, and that common name will help you recognize it. (Photos above and below). 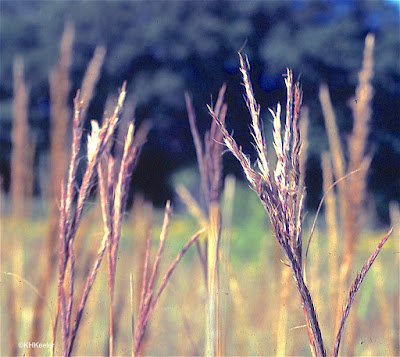 Big bluestem can be found from forest openings on the East Coast to moist spots at the base of the Rocky Mountains. A warm season grass, it grows well under hot conditions, becoming sparser northward and then dropping out in southern Canada. It comes up late in the spring and dies back in early fall, turning quite red; in between it is very heat-tolerant and grows well in hot summers. For a big grass, it is water-efficient. (As a general rule, bigger plants need more water.)

Big bluestem dominated the tallgrass prairie, forming up to 80% of the grassland; imagine a bale of prairie hay: 80% was big bluestem. Part of its success was due to deep roots; the plant went 6' up into the air and 6' down into the ground. In the 25 or more inches of rainfall of the Corn Belt, it got plenty of water and could hang on through moderate droughts. Its deep roots took water from other plants and its 2-3' long leaves blocked them from the sun.

It was a major contributor to the excellence of the soils in the U.S. Midwest; its fine roots left rich organic matter in prairie soils.

Another part of big bluestem's success was its reaction to fire: it was stimulated. Truly, big bluestem grew bigger and flowered more the season after a prairie fire. Like almost all grasses, its apical meristem (growing point) is below ground, so a fire cleared off dead leaves but did not kill the meristem. Most grassland fires move fast, heating the top of the soil--a great insulator--only very briefly. With their meristems intact, the grass leaves, like human hair, grew back quickly from the base. Assuming ample water, big bluestem created a green lawn within about three days after a prairie fire.

Since fire cleared off layers of dead leaves, the bare soil warmed faster than without a fire, helping big bluestem grow earlier in the spring.

Most other plants do not respond as quickly or as strongly to fire, so big bluestem was able to shade and crowd them, leading to its dominance. Where fires are suppressed in tallgrass prairie, big bluestem is much shorter and other species expand.

Below is a photo a little earlier in the growing season on a year without a spring fire. There is just as much big bluestem there, but it is not as big or producing as many leaves or flowers as right after a fire. 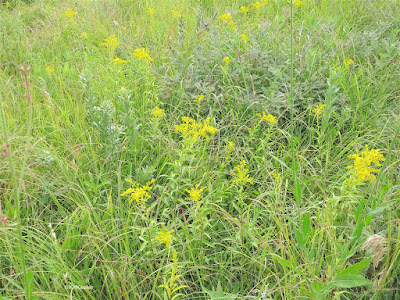 Like many plants with large ranges, big bluestem shows lots of variation. The grasses in the photo below, short and tall, red, brown and yellowish, are all big bluestem, growing together in a research garden, soybeans in the background. 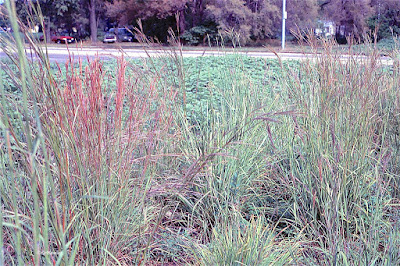 Big bluestem is an important, well-adapted native grass that settling the Midwest largely eliminated. It persists on grazing land and in prairie remnants. It would be great to find places to plant back more of it across its native range.

I can give you references if you ask but I did ecology research on big bluestem for 20 years, have seen most of what I wrote for myself, and don't remember where I learned each fact any more.

Posted by A Wandering Botanist at 1:49 PM