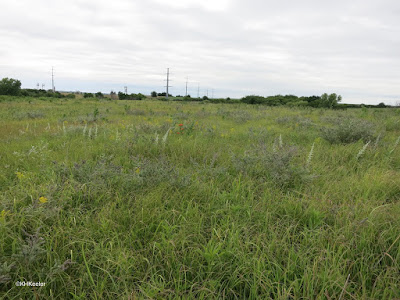 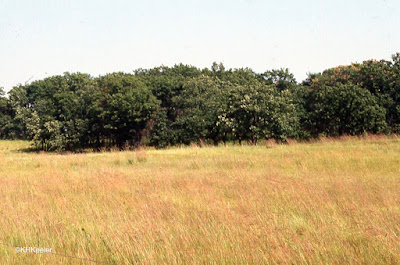 The photo above is from the prairie edge in Minnesota and shows the transition as it was historically described: the eastern forest stopped abruptly and then is was grass as far as the eye could see. Grass, grass and more grass, with an occasional herbaceous non-grass plant. Imagine turning your back on the scene above to see the landscape below. In presettlement days, you saw the same thing if you reached the horizon, and the same thing again on the next horizon, for hundreds of miles.

Part of the lack of romance in prairies for most people is that need to imagine what it was like.  There are very few places where you can see anything like the great sweep of the presettlement grasslands. What you see are scenes like the one below, a small plot of grass and beside and beyond it houses or cornfields. The tallgrass prairie grew in some of the best agricultural land on the continent and it was quickly plowed. It provides the strong agricultural base of the United States. The Corn Belt and the tallgrass prairie region are almost exactly the same area. 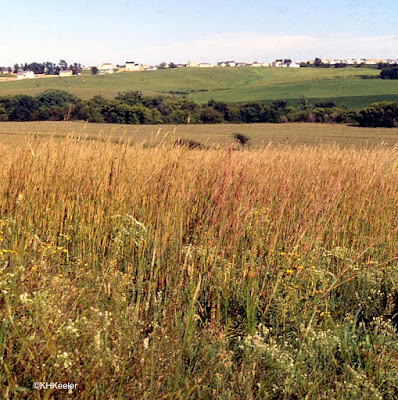 People who find forests romantic have surely walked through forests, enjoying the scents and sounds.
To do that in a tallgrass prairie, you have to find one. Most of it, certainly 96% and in most places 99%, is gone. The pieces that remain are small enough that you can't avoid seeing the neighboring properties.  There are three exceptions, two tallgrass reserves in Kansas (link, link ) and one in Oklahoma (link),

(I am praising as surviving tallgrass prairie areas that have never been plowed. But their animal community is missing critical species. Bison have been reintroduced on the big reserves, but not elk, bears or wolves. Are the little pieces really the tallgrass prairie or are they little grass museums? It is 100% gone if you want an intact ecosystem with predators.)

I don't so much want to be sad as to draw attention to this vanished ecosystem. A major plant and animal community from the middle of the United States is almost completely gone. It is also not well-known or much romanticized. Why it isn't a stronger part of our traditions?

Partly, it was so very quickly destroyed. Settlers, farming the Midwest, plowed the tallgrass prairie within 100 years. In 1800 it was virtually undisturbed. By 1900 it was torn into pieces with settlements all across the region. Coming into the 21st century the remaining pieces are tiny, disturbed and very isolated, islands in a sea of development. The first settlers valued the land for the crops it would raise, they saw no value in the native grasslands. Unlike trees, you couldn't build much with grasses. Unlike the drier prairies to the west, the best use of the land was not running cattle on intact grassland but replacing the prairie plants with corn, sorghum and wheat. Only one or two generations of settlers had large pieces of prairie near them and most of those people were very busy with daily life: they may have thought the wind in the grasses beautiful and loved gathering bouquets of wild asters but they found corn fields much more important.

When we try to teach about tallgrass prairie, we have a hard time showing prairies to the next generation and having them be interested or impressed. You may have read that a man could stand in his stirrups and not see over the grass. That isn't the tallgrass prairie that you are likely to see on a visit to a local remnant. Mostly the grass is about 3' high. My students would say disparagingly, "those weeds." The same grasses CAN be more than 6' high, but most years they are not. The big prairies reserves are on the western--driest--end of the tallgrass prairie region. Without abundant rain, grasses won't grow tall. Generally too, they need a winter or spring fire to clear off the ground and give them an extra week or more of growing season to get really tall. I have seen 6' grasses in tall grass prairies, but rarely. One was at University of Illinios. Their prairie patch gets a lot more rain in an ordinary year than Nebraska prairies. (Ironically, though, they had planted tallgrasses from Nebraska, so the difference was not the grasses.)

The other time I saw really tall grass was in a small prairie on the outskirts of Omaha. It had not been burned for many years. The summer after it was first intentionally burned, the grass grew very tall. I am 5'4" and I could not see over that grass. I walked out into it and was swallowed up. I could not see the horizon in any direction! Scary, actually. When you walk in a cornfield taller than you are--the closest equivalent most people have experienced--the corn plants are in rows, so there's space to walk. The tallgrass prairie was solidly filled with tall thin grass shoots. Moving through it was like swimming: I pushed it out of my way with two hands. To get my bearings, I jumped up and looked around quickly before dropping down again into the grass. I felt like a spaniel leaping through a meadow, ears flapping.

Those prairie experiences were the exceptions, mostly the prairie plants grow three feet' high and visitors don't see what the fuss is about.

Prairie restoration is very active all across the tallgrass prairie region and likewise there is energetic prairie education going on at all levels. A great deal of progress has been made in the last 30 years, preserving prairie remnants, connecting isolated pieces, reintroducing bison. This is our great lost ecosystem, in the middle of everything but very nearly totally gone. To our modern life, even in the area where it used to grow, it is as exotic as a tropical rain forest or a coral reef.

I hope education and restoration will raise tallgrass prairie visibility and increase the number of people for whom it is a subject of romance, like tropical rain forests or high mountains. As you can tell, I find it fascinating and romantic.

Posted by A Wandering Botanist at 7:27 PM