The Range of Prairie Plants--Natives of Edmonton, Alberta


"I know that plant!" I was 1200 miles almost due north of home, in Edmonton, Alberta at a Botanical Society meeting. I had never been that far north in Canada. There, a native garden at the Shaw Conference Centre featured plants important to the local Cree tribe. And most were plants I knew from Colorado. See blanket flowers, asters, monarda in Edmonton, below and in my "grow local natives" Denver Post article.

Read more »
Posted by A Wandering Botanist at 2:12 PM No comments:

Don’t you hang upside down in the Southern Hemisphere?

It sounds strange to ask that, but since ancient Greece, it has been a recurring question:  how can there be life south of the Equator, if the world is spherical, won't anyone there fall off?

But because the Southern Hemisphere IS on the other half of the earth from the Northern Hemisphere, the stars are seen from a different angle. Familiar constellations such as Orion hang upside down. But also, the reversed seasons means that Orion is a constellation of summer, when the days are long and star gazing requires staying up late, while Leo, a constellation I rarely see because it is high in the sky early in the night only during the northern summer, is easily seen in the southern winter nights.

And of course, the Polaris, the Pole Star over the North Pole, is hard to see from the Southern Hemisphere, staying low on the horizon, as does the constellation in which it sits, the Little Dipper (Ursa Minor). Conversely, the constellation over the South Pole, the Southern Cross, rises higher and is easier to see the farther south you go.

Read more »
Posted by A Wandering Botanist at 12:30 PM No comments:

Ew! The tropics! Deadly snakes and poisonous plants! I tip-toed through the vegetation as if every leaf would bite!

I first encountered the tropics in 1973, when I took an Organization for Tropical Studies course, Tropical Ecology, which introduced U.S. graduate students to the tropics, in Costa Rica. At the beginning of the course, they gave us a safety orientation: these snakes are poisonous, these ants have a sting that will incapacitate you, these leaves cause welts...

Suitably intimidated--having experienced only the northern United States--I stayed in the middle of the path and tried not to get close to the leaves.

Read more »
Posted by A Wandering Botanist at 1:46 PM No comments:

Visiting Taiwan--Wild is Close By

Taiwan is a small and densely populated island (link), but it has high mountains in the center and those mountains are so rugged that that they remain wild. Because it is a small island, access to wild Taiwan is surprisingly easy. You can, for example, take a city bus from downtown Taipei, Taiwan's capital, to Yangmingshan Park, hike for the afternoon and take the bus back to the city center, or start from there on a backpack adventure through the mountains of central Taiwan. 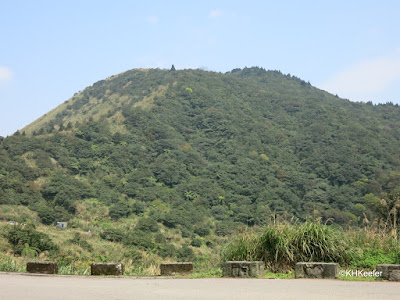 Read more »
Posted by A Wandering Botanist at 2:32 PM No comments:

On a tour of gardens in Philadelphia, the local guide stopped and said proudly " this is our franklinia." It was the third different franklinia tree pointed out to us.

Being from Colorado, my reaction was "so?" No franklinias in Colorado.

Read more »
Posted by A Wandering Botanist at 1:38 PM 4 comments: