Don't project your garden assumptions on me!
Gardening is, of course, like cooking; it is a skill many people learned from their families and not from professional teachers. So many doubtful ideas are circulating. I'm actually sympathetic to "because my father did it" as a reason for a garden practice, although that doesn't mean it is a sound idea.

However, answers from "experts" that assume what I want in my garden really annoy me.

Read more »
Posted by A Wandering Botanist at 2:17 PM 3 comments:

In the mountains north of Taos, New Mexico, we hiked the Nordski Trail. It is a trail for cross country/Nordic skiers, including beginners, and so relatively level. We saw lovely vistas and wonderful flowers. 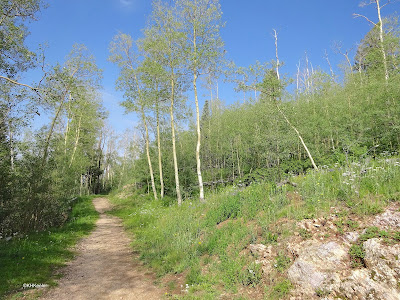 This post is about an important, useful plant that people walk by without noticing. Or, since it is mostly stem, look right through. A native wildflower, greenthread is found from Michigan to Arkansas and west to the Pacific Coast. It is not rare. But it tends to go unnoticed.

I recognize greenthread because I was a professor studying plant ecology. Everyone assumes plant ecologists know all the plants. I know lots of plants, but I didn’t start out that way. One at a time, I learned them. I encountered greenthread in the sandhills of Nebraska. Greenthread was there, growing amid more showy plants, easy to recognize once you noticed it.

The species epithet megapotamicum uses the Greek mega, large, and potam- from potamos, a river, and the -icum ending makes it possessive, so “of the big river.” The big river meant the province of Rio Grand do Sul in southern Brazil. [Geeky botanical detail: Frederick Sellow (1789-1830) collected plants in Brazil in the early 1800s and sent the specimens back to the herbarium in Berlin. Other botanists, in particular Christian Konrad Sprengel (1750-1816) organized the specimens and named them. Sprengel named a plant of Sellow’s Bidens megapotamica, because Sellow had said it was “of Rio Grande” and Sprengel didn’t know that referred to Rio Grande a province, so turned the location into “big river,” in Greek. Otto Kuntze (1843-1907) moved the plant to the genus Thelesperma from Bidens.] Thelesperma megapotamicum is found in the United States and northern Mexico, and southern Brazil, Uruguay, and northern Argentina, but not the tropics in between, a quite peculiar distribution. (Most of the North American references don't seem aware that this plant is also found in South America, but see the GBIF map link).

North American botanists seem to think that Hopi tea greenthread is native to dry grassland and forests from Texas to South Dakota, west to Wyoming and south to Arizona, and that its wider U.S. distribution is a result of rather recent spread. Current distribution maps show it in states from Michigan, to Kentucky, to Arkansas, west to Nevada and California. Botanical writers imply that recent human activity introduced greenthread to these places, though I can’t find anyone who says whether it was planted for tea and escaped or moved on its own along roadsides and trails. In all, Hopi tea greenthread has a very wide distribution—South and North America; you might run into it in all sorts of places.

Hopi tea greenthread has several widely-used common names. I did a double-take when I realized that the little prairie plant I knew as greenthread was also the important Hopi tea. When you meet a plant in a native prairie, nothing about it says it is a famous tea. Southwestern sources prefer the name Indian tea, and make the point that many tribes drink it, not just the Hopi. Plants for a Future calls it Navajo tea and gives the name Hopi tea to the related Thelesperma gracile.  It is also widely called cota. Cota is the common and scientific name of a genus in the sunflower family that includes many plants used for tea in the U.S. Southwest and into Mexico, so calling greenthread cota is, loosely, calling it “tea.” Some places it is just called wild tea. There must also be South American common names, but I couldn't find them.

While Hopi tea greenthread is pretty recognizeable, it is easily overlooked. Why is it missed? It is mostly stem. The leaves are narrow, well, thread-like. When it flowers, there's a cluster of small disc florets, but no ray florets, so the flowers never seem to open. It is in the sunflower family, Asteraceae, with the same basic flower head structure as a sunflower, just without the ray florets, the little flowers around the outside that in sunflowers have the petals. The flower head becomes a seed head without looking very different than when it was in bud or in full flower.

Greenthread’s leaves are small and stem-like. Leaves that are longer than they are broad, and just generally small, make plants more drought-tolerant, because, for leaves, they lose the least water; when it gets too dry for narrow little leaves, plants have green stems without leaves (cacti) or leaves that fall off in the dry season (creosote bush). Greenthread’s green stems undoubtedly conduct photosynthesis and supplement the work of the leaves. It is a perennial that grows in regions with recurrent drought, so water efficiency is important. Its thready shape might also result in it being overlooked by rabbits and elk, as well as by humans, a few stems hidden among other plants.

Despite the fact that the flowers don’t seem showy to us, they attract a wide array of butterflies and bees. I only found one insect for which it is the host plant, the dainty sulfur butterfly, Nathalis iole (Pieridae) (see butterfly: link) but likely there are other insects that rely on eating this widespread native plant.

Under good conditions, Hopi tea greenthread flowers from late spring through October. In the west it grows from about 1000 ft. elevation up to almost 10,000 ft., in openings in desert scrub, oak/juniper woodlands and pine forests.

Why is Hopi tea greenthread important? You already figured it out: as tea. Greenthread is considered to make the best wild plant tea across New Mexico, Arizona, Utah, and Colorado, and likely farther. Generations of people, all the regional tribes as well as both English and Spanish speaking settlers, have brewed it for tea. Dried plants are infused in hot water, making a golden tea with a slightly smoky flavor, as easily as with a tea bag.

Ethnobotanical and foraging sources agree that tea from greenthread is outstanding, but I suspect it would be easy to get into an argument about how to make the best tea from greenthread. According to Native American Ethnobotany, the Chiricahua and Mesaclero Apache and the Navajo made tea of leaves and young stems; the Hopi used flowers and stem tips; the Keres brewed the whole aboveground plant; the Keresan used leaves and roots; the Ramah Navajo used leaves and flowers; the Tewa just the leaves. Doubtless, each of these people would argue that their way was best. It is a rich area for experimentation if you have greenthread available.

Greenthread has long been used in folk medicine. The tea is slightly diuretic so it is drunk as a treatment for urinary problems. And a cup settles the stomach. Tribes also used it to treat colds, toothache, and muscle cramps. It is still widely used medically.

Greenthread also makes an excellent dye. Navajo, Hopi, and other dyers of the Southwest produced bright, durable colors, from greenthread. The hues ranged from golden orange to bright yellow, depending on what mordants (metal ions) or other plants were added. It dyed wools and cottons, and even the usually-hard-to-dye baskets. "Greenthread" refers to how the plant looks, not the dye colors it produces. The plants are so skeletal that a lot of them are needed to make a strong color. I have wanted to dye with greenthread for years, but I have never seen enough plants at one time to make more than a tiny cup of dye. Apparently where Navajo and Hopi dyers forage for dye plants, greenthread can be abundant.

Watch for this inconspicuous plant!

Moerman, D. E. 1997. Native American Ethnobotany. I used the printed book but here's the link to the database online link

I went on a week's vacation to northern New Mexico in mid-July. We hiked and went to botanic gardens, but the best moment of wildflower spotting was the unexpected one. A field of flowers on the roadside. 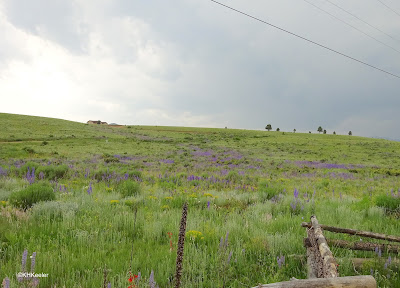 Someone in the car asked, "why is the hillside purple?" I didn't know if it was a stand of penstemons or something else, so we pulled over so to look.

When I stepped out of the car, all about my feet was the most wonderful diversity of flowers!

Yucca and yuca are different plants. Both are important plants, but they don't grow in the Eastern U.S., rarely show up in grocery stores, and aren't in bouquets of flowers, so many people don't know them. And, therefore, don't know to try not to confuse them.

Read more »
Posted by A Wandering Botanist at 1:50 PM No comments: