We took a winter escape. To San Diego, California, in January. I knew it could be warm there, but it wasn't. Heavy rain had just swept inland and behind the front the highs barely reached 60 oF. In the sun, it was pleasant, but not very warm.

I walked the beach on Coronado Island. Here are some photos so you can enjoy it too:

The edge of the beach was a study in exotic plants; I doubt any of those are native to the San Diego area, let alone Coronado Island.

There were lots of structures for the use of people. I could imagine crowds on a sunny summer day, but it was very quiet in mid January.
Looking seaward, lots of birds ran in the receding tide:
followed by bird paparazzi 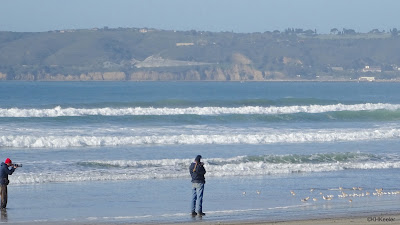 The seashore had only the occassional shell 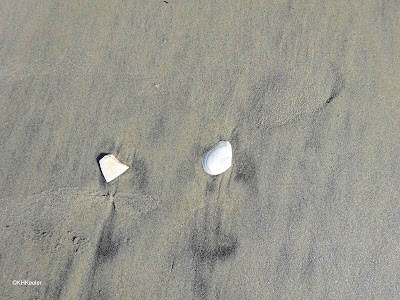 and various washed-up pieces of seaweed
But, they were working hard to clear off the beach and make it neat:
Some of the plants strewn on the beach were land plants. Most had little chance of survival. This one might root and live, but it was not above the tide line, so probably not.
But where there was stable sand, the heavy rains of the previous week had stimulated seedlings. There's little green things in the photo all the way to the bottom. The small ones are newly-germinated seedlings.
Always a good place for a stroll

Posted by A Wandering Botanist at 3:00 PM No comments:

This is the Buddha's hand citron:

It rarely appears in North American markets, but is common in Asia.

Read more »
Posted by A Wandering Botanist at 9:11 AM No comments:

Plant Family: The Lamiaceae, the Mints

This is a mint

this is a mint

and this is a mint

This is also a mint

Wait a minute! All of those? They don't look like spearmint (Mentha spicata)

My husband won't eat green beans. It is the one vegetable he totally rejects. But last summer I grew runner beans. Not as food, but because I think they're beautiful.
Runner beans, often called scarlet runner beans (Phaseolus coccineus), are closely related to common beans (Phaseolus vulgaris). Both are native to the Americas, but scarlet runner beans are from mountainous areas in Central America, and were domesticated about 2,000 years ago. They reached Europe in the 1500s and became both an important vegetable and an ornamental. They are much less often grown in the United States. I recommend them!
Read more »
Posted by A Wandering Botanist at 3:00 PM 1 comment:

Its a new year and we pause to look both forward and back. 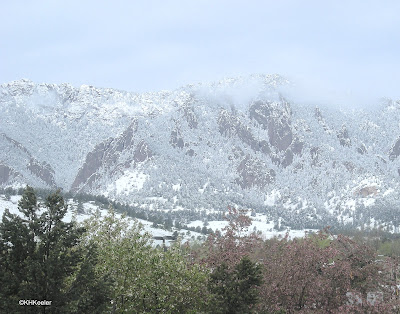 What if, in the new year, you made a plant Life List? Bird watchers keep Life Lists of all the bird species they've seen, with the goal of seeing a large number of the 11,000 species of birds. That's probably not attainable, but Europe has 540 species of birds and North America 2,059, so one could see a significant portion of those.
How would that apply to plants? There's a similar problem of too many species worldwide: over 400,000. Even Europe is daunting with 9,875 plant species, while North America has over 20,000.
But I met a couple that were trying to see each of the 19 penguin species in world. That was quite a challenge because some of them are confined to remote islands in the Southern Hemisphere, but a manageable number.
So consider these Life List ideas for plant lovers:
Read more »
Posted by A Wandering Botanist at 2:30 PM 1 comment:

There's a long tradition of putting oranges into Christmas stockings. Oranges are so readily available today that that seems a little odd. But the next time you encounter an orange, take a moment to notice it. The rich orange color. The scent, both of the whole fruit and of the brightly colored sections inside, is enticing. The wonderful sweet juice.

Nasturtiums are easily-recognized garden flowers. They have big orange (or red or yellow) flowers with a long spur and interesting round leaves with the stalk (petiole) in the center. They are also edible.