Facebook gardening groups post pictures of plants found in their yards and ask "Is this a plant or a weed?" Botanically that is a terrible statement because all weeds are plants, though not all plants are weeds. But what the writer meant was, "Is this a desirable or undesirable plant?" 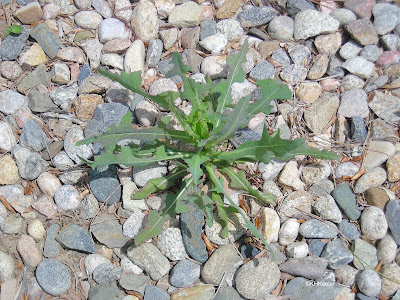 We can identify the plant, and if the property owner didn't plant it, then it will likely be called a weed.

But that is so limited! I'd like at least a third category.

Read more »
Posted by A Wandering Botanist at 5:11 PM 2 comments:

Hiking in Estes Park, Colorado at 7,500' elevation on the east side of the Colorado Rocky Mountains, last June, I climbed a rocky slope and shared the plants and views a couple weeks ago (link). The next day I walked downhill and along a clear, turbulent stream. The plants were quite different.

The difference wasn't elevation as much as habitat. The stream provided water in the soil and humidity in the air. These supported leafy trees that cast shade and trapped the water that evaporated off the stream. And finally, streams periodically flood, leaving silt to build and enrich the soil along their banks. So for all these reasons, the streamside plants were different from the hillside plants.

The Victoria Water-lily 2. The Plant

The Victoria water-lily (Victoria amazonica) is a grand plant with 8' diameter leaves and big fragrant white flowers. It caused a stir when it was discovered and the English made it a symbol of Queen Victoria.  It made another stir last week when a new publication recognized a giant water-lily in the same genus, Victoria boliviana, with 10' diameter leaves. (Description of discovery and the July 4, 2022 recognition of a third species in the genus Victoria in the previous post: link).

But beyond all that, it is an amazing plant.

The Victoria Water-lily I. History

It is one of the wonders of the world. A water-lily with leaves 8' in diameter and beautiful fragrant flowers nearly 12" across. It would have been famous in any event, but it was discovered for England in 1836 in British Guiana by Robert Schomburgk, just as Queen Victoria was about to become Queen of England. Members of the British botanical and geographical communities, individually and collectively, dedicated it to Queen Victoria. So they named it Victoria regia in her honor. (Not without controversy, see Flower of Empire for a detailed story).

Today you can see it growing in many botanic gardens or buy seeds if you want to try for yourself. Today it is called Victoria amazonica, with two other species in the genus, the largest described in July 2022. I'll explain all that. But when I saw the plant in Amazonian Peru, I was struck by its botany, not its name or history. So this became a two-part blog, one on the finding and naming of it, and the other on it as a plant (botany).

Read more »
Posted by A Wandering Botanist at 2:05 PM 1 comment:

Hike with me up a dry mountainside in Estes Park, Colorado. It is late June, almost July. But mountains are fun; climb a few hundred feet or turn a corner and the season is two weeks earlier or later, because it is cooler or warmer, shadier or sunnier, moister or drier there. Elevation and aspect make dramatic differences. (And so does location, going north or south changes your season too.) So you might see these plants in bloom in other months.

Read more »
Posted by A Wandering Botanist at 3:36 PM 1 comment: