Turmeric (Curcuma longa, ginger family Zingiberaceae) is a Southeast Asian ginger that has been a major spice and dye since antiquity.
It grows from a rhizome (the source of the spice), with short stems and tall leaves that can be 3' high. Flowers are yellow-white and pretty (link). While close relatives, called curcuma by nurseries, for example Curcuma petiolata and C. aromatica, are grown for their dramatic flowers, breeders have produced some handsome varieties of turmeric as well, with red, white, or pink flowers link. Turmeric is unknown in the wild and makes no seeds, so it requires people to spread it, although in a few places in the tropics it appears to have escaped from cultivation.

Turmeric has been cultivated in India for at least 4,500 years. It is an important spice in India and Southeast Asia, essential to curry powder, the yellow of yellow rice, and as a medicine and cleanser.  It is recorded from the Middle East by 800 BCE, China about 700 CE, and East Africa about 800 CE. It reached the coast of southeast Asia before the Micronesians and Polynesians set sail into the east, so arrived in Tahiti, Hawaii and Easter Island with humans. It does not grow in Europe (too cold and dry) but was brought there by trade through the Middle East shortly after 1000 CE. Europeans called it Indian saffron or eastern saffron, but, lacking a dish like curry in their cuisine, it never became a major spice. Today turmeric is of course essential to curries, and flavors dishes in cuisines from Polynesia to China to India to Iran to west Africa. It is also used commercially as a colorant for lots of foods that are yellowish, from cheese and butter to orange juice and popcorn.

Turmeric is often compared to saffron. Saffron (Crocus sativus, amaryllis family Amaryllidaceae) makes an intense yellow powdery dyestuff, but, because it is the dried, crushed stigmas of the
flower--small and only available when the plants are flowering--dyes similar to it but available in larger quantities were prized in the Middle East and Europe. Turmeric was valued in its own right, but it also substituted for saffron. For millennia unscrupulous merchants have sold turmeric for saffron. Saffron is native to the eastern Mediterranean, and was not recorded from India before the 10th century, so in India and eastward, saffron is imitation turmeric. 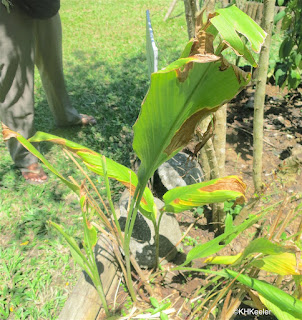 I expected the name turmeric to be a version of a Sanskrit name, but the OED shows a whole list of variant English spellings. including tarmaret, tormarith, turn-merick, tarmanick, tarmaluk, and turmerick, and says the origin is from the French terre mérite and Latin terra merita "deserving or deserved earth,", reportedly the name used by early Arab traders. Why it should be "deserved earth" the OED does not say. However, in India, turmeric was sacred to the earth goddess, so perhaps the trade name reflected that.

The scientific name Curcuma is based on the Persian word for saffron kurcum "yellow" which became curcuma in Latin. There are 100 other species of Curcuma, native to tropical Asia. The species epithet for turmeric, longa, simply means long. (Curcuma domestica is an older, now replaced, name for C. longa.)

Turmeric has vast religious significance in Hinduism (see more link and the Sopher paper listed below). In parts of India, a marriage was completed if the couple linked hands and turmeric water was poured over their hands. That was just one of many ceremonial uses. Turmeric's bright yellow color represented the sun and sun gods but its yellow also matched the yellow of many soils in the region, linking it to earth goddesses, fertility, and prosperity. In an alkaline solution, turmeric turns reddish and as such was symbolic of blood, with all blood's complex associations. Few Hindu ceremonies could be completed without turmeric. I cannot think of a western European or American herb given a similar level of significance, for example by itself consecrating marriage.
Turmeric is widely used in Ayurdevic medicine and traditional Chinese medicine. It is antiseptic, antibacterial, and anti-inflammatory, with little toxicity (though it not recommended for people with bile duct obstructions and gallstones). German Commission E, testing traditional medicines with modern science, found it effective for digestive complaints and as a tonic. It reduces hay-fever symptoms, cholesterol and more (see WebMD, link).

Today, it is grown all across the tropics, with much more of that produced is used locally than is exported. Most tropical cuisines use it. It provides the color of yellow rice, often today colored with saffron but originally and traditionally made with turmeric. Though Europe barely noticed it, turmeric has been a very important spice for a very long time.


Turmeric also produces an intense yellow dye: about that in the next post. Turmeric Part 2.

Posted by A Wandering Botanist at 2:22 PM 3 comments:

In December, my husband and I visited Hawaii, staying in Honolulu for a week. Today (May 2020) there's a two week in-your-hotel-room quarantine for people arriving in Hawaii. I daydream about making taking a three week trip but probably not. So I'll reminisce.
Of course there were beautiful sunrises, such as this one, over Waikiki. But wait, that's a plant picture, a hau tree, Hibiscus tiliaceus (mallow family, Malvaceae), frames the photo. (This is after all, a botanical post).

Read more »
Posted by A Wandering Botanist at 5:26 PM No comments:

Spring is the blooming time of many plants of the mustard family, Brassicaceae, from shepherd's purse to black mustard to clasping pepperweed, but also radishes, cabbages, and oilseed rape. The family is pretty easily recognized because the flowers have four petals in the shape of a cross, the source of the older (still valid) family name Cruciferae.
Blue mustard, Chorispora tenella, is one of the spring mustards. Actually, its seeds germinate in the fall, the young plants lay low over the winter and put on a spurt of growth in spring to flower in April or May, dying in the heat of midsummer. That life cycle is described as being a winter annual, and like many winter annuals, if conditions are right, blue mustard seeds will germinate in spring and grow rapidly, making them also "spring annuals."

Read more »
Posted by A Wandering Botanist at 2:24 PM 1 comment:

In February I visited south Florida. Lots of it looks like this: 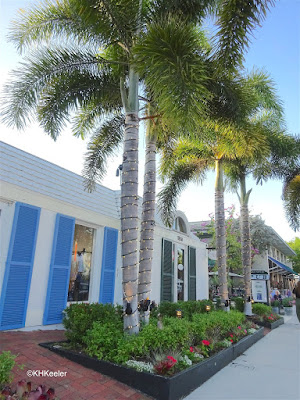 Which is very different from the look of the native vegetation: 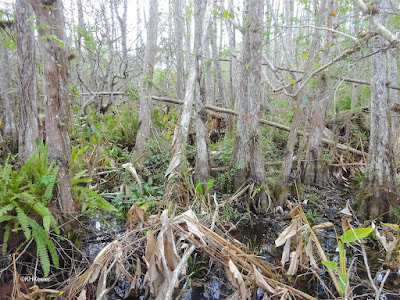 Read more »
Posted by A Wandering Botanist at 1:51 PM 1 comment:

In ecology classes, some student always complained about the difficulty of learning the scientific names of plants, and I long ago came up with examples where the common name is no easier. One of those is puccoon.
The plants called puccoon are in the genus Lithospermum (borage family, Boraginaceae). Neither puccoon, which means "dye-plant" in Virginia Algonquian, nor Lithospermum. which means "stone seed" in Latin, is a familiar word to Americans. Stone seed and gromwell (what is a gromwell?) are other common names for Lithospermum species, but I learned it as puccoon.