In July 2012 I spent a week in southern Finland after visiting Iceland. At the opposite end of Scandinavia, Finland is very different from Iceland.


At 130,666 sq. miles, Finland is a slightly larger area than the state of New Mexico, but longer north-south and not as wide. The northern third is inside the Arctic Circle and the south on the Baltic Sea's Gulf of Finland. Unlike Sweden and Norway, it is not mountainous. The population is 5.4 million, making it one of the least densely populated European countries.

We visited the southern part of the country just after the summer solstice when the days were very long.

Finland has conserved its forests and you don't have to go far from Helsinki for the country  to look uninhabited.

Read more »
Posted by A Wandering Botanist at 12:24 PM No comments:

In July of 2012 I visited Iceland for a week. I expected green hills and Viking-era history. I found a whole lot more.

Iceland is an island of 40,000 square miles (the size of the state of Kentucky) in the North Atlantic just barely south of the Arctic Circle. There were no humans until 860 AD when a ship from the Faroes stumbled on it. A few years later a ship captained by Raven Floki came to explore. He found it cold and dangerous and named it Iceland. Settlers arrived in 870. They spread across the land, trying to raise crops on an island with shallow soils and a short growing season. Eventually they gave up growing grains and simply raised livestock on the green fields.

Read more »
Posted by A Wandering Botanist at 3:24 PM No comments:

Plant Story: Plantains (Plantago), Tracking Your Footsteps All Over the World

Plantain is that little plant you stepped on crossing the lawn at the park.

The weedy plantains are small, common and easily overlooked.

In the U.S. there are two species of plantain from Europe that are found in every state, common plantain, Plantago major and lanceleaf plantain, Plantago lanceolata. The flat plant with leaves sticking out in all directions, the prominent veins running down the leaves and the distinctive flower heads make them easily recognizeable. Common plantain has the broad leaves (first photo). Lanceleaf plantain has the narrow leaves (second photo). The names plantain and Plantago for these plants both go back to the Latin word planta, meaning footprint.

The story of pineapples reminds us of a time when you couldn't zip around the globe in an airplane…
The pineapples we see in grocery stores are the fruit of herbaceous plants, scientifically Ananas comosus, in the bromeliad family, Bromeliaceae. The bromeliads are almost entirely confined to the New World. Most bromeliads are epiphytes, living on trees (see photo), but pineapples grow on the ground (photo above).

Pineapples were apparently domesticated prehistorically in South America and dispersed throughout all tropical America in very ancient times. 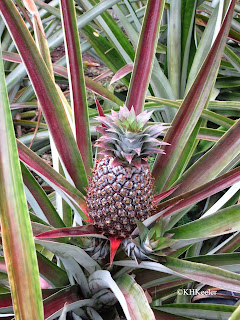 The native people of Guadalupe, and other Caribbean islands, considered sharing pineapples a symbol of hospitality. When Columbus landed on Guadalupe on his second voyage in 1493, they offered him pineapples.

Columbus and his men thought the pineapples were delicious. Columbus called them "pine of the Indies." The men in his crew and subsequent Spaniards called pineapples piña, from "pine" in Spanish. Apparently because it reminded all of them of a pine cone. The name piña or pine for pineapples carried over into English initially. In 1633, Gerard called it the pinia or pine thistle in his Herball. (It was not included in the first edition of the Herball in 1599, the one you can find online).

John Worledge is given credit for saying the fruit was "like a pineapple" in 1676. At that time, the word apple was used for any fruit, so a pine apple was the fruit of a pine tree, today called a pine cone. That name stuck, replacing pine of the Indies, pine thistle and older names. Despite the shared names, pineapples are obviously not much like either pines or apples.

Read more »
Posted by A Wandering Botanist at 9:29 AM 1 comment: