After the Garden Blogger's Fling, which featured gardens around Washington, D.C.,  I attended the Botanical Society of America meetings, within the excellent facilities of the Omni Hotel, Fort Worth, Texas. The first meeting was full of bright flowers, garden design and the heat and humidity of northern Virginia in June (link). The second showcased of the latest ideas, photos of exotic locations and the dark and chill of air-conditioned conference rooms.

Read more »
Posted by A Wandering Botanist at 6:02 PM 1 comment:

The Garden Bloggers Fling is an annual conference of people who regularly write about gardens and gardening online. Hosted by an enthusiastic team of garden bloggers link it moves around between cities. Flings have been held for a decade, but this year was the first time I went.

What do garden bloggers do at a conference? Visit gardens! 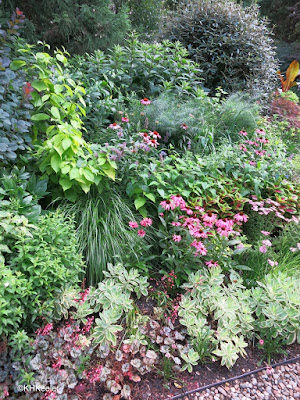 Read more »
Posted by A Wandering Botanist at 1:33 PM 1 comment:

You can't miss them. Big white flowers along the roadside in the eastern Rocky Mountains and out onto the plains.

The plant is crested prickly poppy, Argemone polyanthemos, poppy family, Papaveraceae. It is also called the thistle poppy and, a name I haven't seen in writing but makes it easy to remember, fried egg flower.

Read more »
Posted by A Wandering Botanist at 2:44 PM 1 comment:

The Greeks and Romans both used it medicinally. Seeds soaked in water treated dysentery. The root was boiled in vinegar and applied to skin ailments and to ease itches. Served in wine, dock soothed aching teeth. It was considered an effective treatment for goiter, which to the Romans meant any swelling in the throat area. One common goiter treatment was to hang a piece of dock around the patient's neck like an amulet.

Throughout Europe, rubbing dock on the skin was an antidote to stinging nettles. Since both were common in wet areas, it was usually available.

Modern herbal medicine doesn't support these uses very strongly: for example, although dock soothes the skin but there are better treatments.

Dock leaves were traditionally added to tobacco pouches to keep the tobacco moist. They were also boiled and added to poultry feed. The stems, after boiling and salting, were woven into baskets. 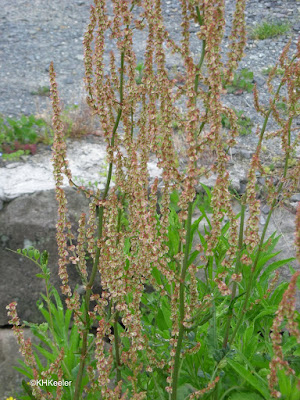 Europeans used the seeds in money charms. They were soaked in water and the liquid was sprinkled throughout the shop to bring customers.

Seeds were tied to a woman's left arm, or carried there, to help conceive a child.

People ate dock. The whole plant is edible, as are other docks and sorrels (species in the genus Rumex; not, though, plants that share only a common name such as burdock (Arctium) and wood sorrel Oxalis). The catch is, not all docks taste good. They range from too tough or too stringy or too acidy, on over to delicious. Foragers often recommend curly dock as best-tasting of the docks.

All docks have some oxalic acid. In large quantities oxalic acid is toxic. Plants for a Future says, "People with a tendency to rheumatism, arthritis, gout, kidney stones or hyperacidity should take especial caution if including this plant in their diet since it can aggravate their condition. Avoid during pregnancy & breast feeding." (PfaF).

In moderate quantities, oxalic acid imparts an attractive acidy, lemon-like flavor. Many common foods such as spinach, contain oxalic acid (more info). An Indian woman told H.D. Harrington that she especially liked that curly dock "already has the vinegar on it." (pp.91-92). 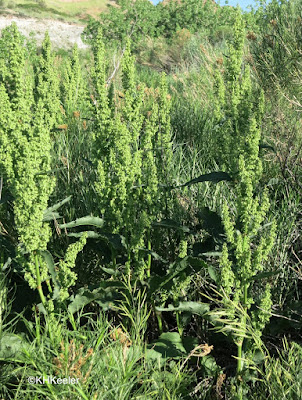 Before you munch a leaf along the hiking trail and write it off as nasty, read foraging books such as Thayer or Harrington, or recipes from the web (see references). Choosing the right plant part at the right time of year and preparing it well makes a huge difference.

People have been eating dock for a very long time. The Tollund man, 4th century BCE, Denmark, whose preserved body was found in a peat bog, had eaten a gruel that included dock seeds as his last meal. (Tollund man; gruel). Dock seeds are easily collected, edible and nutritious, but hardly anyone likes the flavor. While dock seeds may never catch on, seeds of its relative buckwheat, Fagopyrum esculentum, are an important food. Buckwheat is not a wheat at all, but a plant very like dock from which we make both porridge and flour. 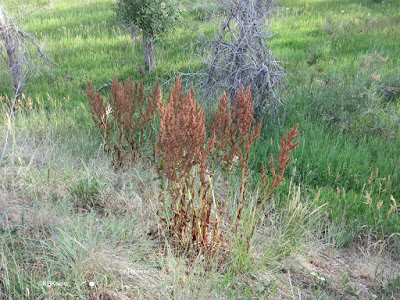 Curly dock has a long history as food and medicine. It is fair to call it a weed when it grows in the flowerbed with the zinnias or in a cornfield. But beyond that, it is a wild plant from Eurasia potentially useful to people all over the world.

What are those big leaves? 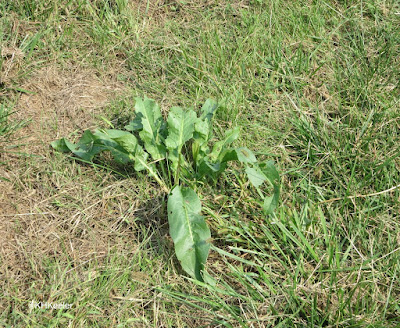 They stand out in the grass or beside the fence.

It is curly dock, also called yellow dock and sour dock, Rumex crispus, buckwheat family, Polygonaceae. Curly dock came from Europe and is a worldwide weed.  I've seen it in 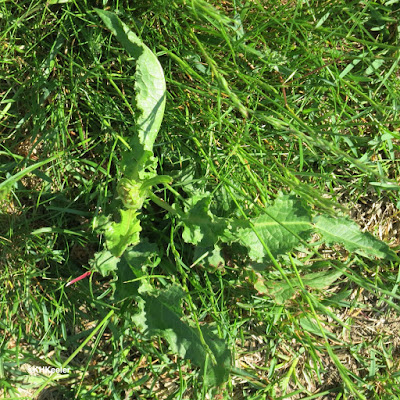 Read more »
Posted by A Wandering Botanist at 6:19 PM 1 comment: