Hiking in Estes Park, Colorado at 7,500' elevation on the east side of the Colorado Rocky Mountains, last June, I climbed a rocky slope and shared the plants and views a couple weeks ago (link). The next day I walked downhill and along a clear, turbulent stream. The plants were quite different.

The difference wasn't elevation as much as habitat. The stream provided water in the soil and humidity in the air. These supported leafy trees that cast shade and trapped the water that evaporated off the stream. And finally, streams periodically flood, leaving silt to build and enrich the soil along their banks. So for all these reasons, the streamside plants were different from the hillside plants.

Some places it was marshy and there were big stands of plants like this iris, the Rocky Mountain iris, Iris missouriensis, iris family Iridaceae.

But I was following a trail near cabins and houses so the path was raised or the wet areas drained to keep it dry. Mostly I saw dryland plants that liked this moister, protected environment.

This is golden banner, Thermopsis montana, also called false lupine and yellow pea, pea family Fabaceae. It spreads to form big patches in shady spots. The flowers are a very bright yellow and attract bees and butterflies. Its flowers always make me smile; so very yellow.

This lovely fan of leaves is false Solomon's seal, or starry false lily of the valley, Maianthemum stellatum, in the butcher's broom family, Ruscaceae. It produces just a few star-like flowers out beyond the final leaf. The genus is called mayflowers and I think a better name for it would be starry mayflower (stellatum, in its scientific name, means starry). Naming a plant by what is isn't seems to me a bad way to make a name. Solomon's seals are species Polygonatum, in the lily family, Liliaceae.  Solomon's seals are widespread but not one of the three native and two introduced species of Solomon's seal is found in Colorado. So the name says "looks like Solomon's seal but isn't" but in Colorado you wouldn't know Solomon's seal looks like. (And so, Coloradans tend to call this plant Solomon's seal, which makes more confusion.) People might know lily of the valley, Convallaria majalis, to know its "not lily of the valley" but lily of the valley is a European plant that, although you can find it in Colorado gardens, is not common and has not escaped here as it has in the eastern U.S. So Maianthemum is named for not being two plants Coloradans probably do not know. Bah. Maianthemum stellatum is a moderately common plant of shady moist spots in the Rocky Mountains.

Lots of plants in the parsley family, Apiaceae, are cultivated--dill, parsley, carrots--and a bunch of others are conspicuous weeds--Queen Ann's lace, wild parsnip, poison hemlock--so we often ignore them when seen in a wild place. Colorado has several very pretty native "wild parsleys." This one is springparsley, Cymopterus lemmonii. There are several others that look very similar, with yellow umbels. Its leaves are like thin parsley leaves or complex dill leaves, the divided leaves seen on the lower part of the photo. They make a grand splash of color in late spring and early summer. 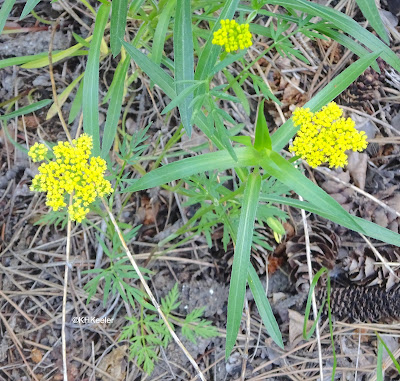 This is a native wild geranium, probably Richardson's geranium, Geranium richardsonii, which is not sticky like the sticky geranium, Geranium viscossissimum that I saw on the previous day's walk. Its flowers are usually white, sometimes pink. It grows in "moist meadows, along streams and in aspen forests' (Flora of Colorado p. 493.)
Native iris are easy to identify in Colorado because there is only one species, Rocky Mountain iris, Iris missouriensis. It is blue (or purplish or pale). If you see a yellow iris growing wild in a stream or pond, that is Iris pseudacris, which is introduced from Europe. I took lots of photos of the irises. I think irises are wonderful.
This is probably purple locoweed, Oxytropis lambertii, a common legume (pea family, Fabaceae), with broad habitat range, found all over the state, from the plains to 11,000' in elevation, the flowers ranging from pink-purple to violet to white. Being common and widespread doesn't make me any less pleased to see it in flower.
Shapewise, this columbine is all wrong for the western red columbine, Aquilegia elegantula, the red columbine of the Estes Park area. It would look like the Colorado blue columbine Aquilegia coerulea, if only it was blue. Frustrated because columbines are should be easy to identify, I stumbled into a Forest Service page (link) that talked about hybridization in columbines and has an upturned pink-and-white columbine, hybrid of western red columbine and Colorado blue columbine. So yes, this one isn't in the Flora of Colorado but is probably a natural hybrid.
Here, hard to see, are tiny bluebells, probably streamside bluebells, Mertensia ciliata (borage family, Boraginaceae). The yellow is a bit of golden banner. 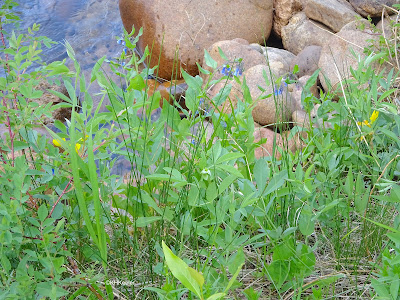