Hike with me up a dry mountainside in Estes Park, Colorado. It is late June, almost July. But mountains are fun; climb a few hundred feet or turn a corner and the season is two weeks earlier or later, because it is cooler or warmer, shadier or sunnier, moister or drier there. Elevation and aspect make dramatic differences. (And so does location, going north or south changes your season too.) So you might see these plants in bloom in other months.

On this west-facing slope, the trees, ponderosa pine mainly but also junipers and others, were scattered. The soil was shallow over big rocks. 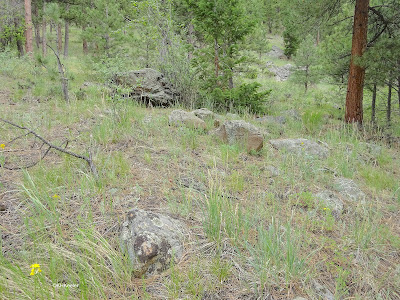 The flowers were mostly solitary, not the dramatic fields of hundreds flowering together as seen in mountain meadows.
Here is a cinquefoil, Potentilla (rose family, Rosaceae). There are 26 species of cinquefoil listed in the Flora of Colorado, just for the county (Larimer). I can eliminate many but not all, so I can identify this one only as a cinquefoil. There's an insect resting on the right flower.
Wild geranium. I believe this to be the sticky purple geranium, Geranium viscosimum (viscosimum means "most sticky" in Latin). The plant is quite common. The lines on the flower reportedly direct pollinators to the nectar in the center. 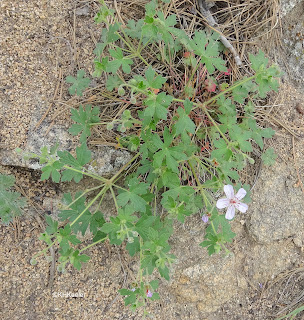 Sedum, stonecrop. This is probably Sedum lanceolatum, spearleaf stonecrop, the only native Sedum in Colorado. People frequently just call it yellow stonecrop because it is also the only yellow one. It opens and closes its flowers with temperature. At the beginning of my hike I thought the stonecrops were only in bud, but coming back, most plants had the star-shaped flowers wide open. It is a succulent with interesting water-holding leaves. (stonecrop family, Crassulariaceae). 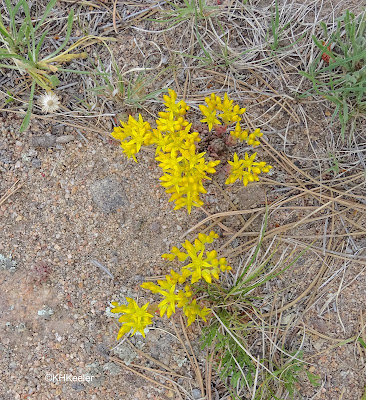 Miner's candle, Cryptantha virgata, also called Oreocarpa virgata (borage family, Boraginaceae).This is a distinctive plant a foot or two tall with pretty white five-petaled flowers all up the spike. It is endemic to (found only in) Colorado and Wyoming, but relatively common here, so a local treat. It is biennial, growing for a year before sending up the flower stalk, which forms seeds and dies.
Dotted along the slope were plants of silver leaf phacelia Phacelia hastata (waterleaf family, Hydrophyllaceae, though the USDA plants website puts it in the borage family Boraginaceae). I thought them very pretty. The look of spikes sticking out of the flower is really stamens and stigmas reaching out so that a visiting butterfly easily gets pollen on its wings and transfers to the stigmas. Phacelias are mainly found in western North America and are particularly diverse in California.
The big leaves below the silverleaf phacelia are common mullein, Verbascum thapsus, an abundant weed in the area.
There were big rocks to climb around, with plants clinging to them. 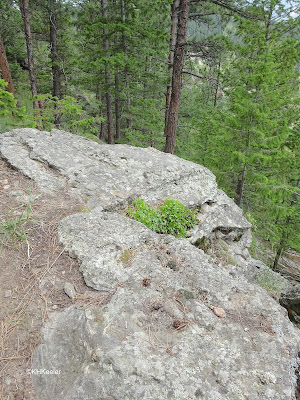 This rock shelf (below) held a big patch, probably a clone, of Rocky Mountain alum root, Heuchera bracteata (saxifrage family, Saxifragaceae). It was in full bloom, but the flower stalks are only a few inches tall and the flowers quite small and greenish white. It is closely related to the Heuchera species sold to gardeners as coral bells. So if you like miniatures, as I do, this is an appealing plant. The hillside held occasional flowering shrubs. This has the apt name of fivepetal cliffbush (Jamesia americana, hydrangea family, Hydrangeaceae). It is found on rocky slopes across the southwestern U.S. It is also called waxflower.
Rosy pussytoes, Antennaria rosea (sunflower family, Rosaceae). They do so look like pussy toes surrounded in red! Such pretty little plants. In the photo below, they are being upstaged by western wallflower (Ersymum capitatum).
This little daisy is a fleabane in the genus Erigeron, probably cutleaf daisy, E.  compositus. It was pretty common, familiar enough to be easily overlooked. I almost didn't take its photo.  But things you see frequently can be very attractive or interesting if you stop and look.
Some plants, like the blanket flowers (Gaillardia aristida) were dramatic. They really stood out among the grasses. This is a plant with considerable variation in its flower color that is found all across western and northern North America. A sister species is found across eastern and southern North America.
Also dramatic were Indian paintbrushes, Castilleja species (owl clover family, Orobanchaceae). There are a lot of Indian paintbrushes in Colorado, with flower colors from red through yellow to white. I love the orange ones.
And then I saw this intensely blue hairy skullcap, Scutellaria brittonii (mint family Lamiaceae). (It is growing amid the leaves of a legume, probably a locoweed, that is not in flower.)
Here, I am much higher, looking downward. 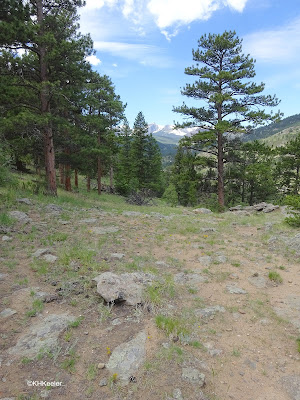 All kinds of interesting things to see! Explore, wherever you are!
Comments and corrections welcome.
Notes: I include the family because you may not have seen the plant (miner's candle for example) but you may know the family (borage), so you can get a better sense of what its like.
I used iNaturalist to try to identify a couple of these plants that I hadn't seen before. It worked pretty well to get their suggestions and check them in the Flora of Colorado. I used their phone ap, Seek, while I was in Estes Park. That identified a couple of plants but gave me just the family, which I already knew, in other cases. The more photos we give them, the better they will do.
I have writen about many of these plants. For more information see:
western wallflower link
cinquefoil  link
wild geranium link
miner's candle link
alum root link
blanketflower link
Indian paintbrush link

Posted by A Wandering Botanist at 3:36 PM