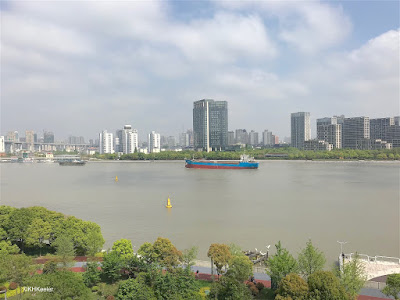 Almost every tour of China goes to Shanghai. With 24 million people, it is China's largest city and #9 in the world. If you count only cities and not their suburbs, it is the biggest city in the world. It grew more than 10% each year over most of the last 20 years.


Shanghai is not an historic Chinese city. The much smaller nearby cities of Hangzhou and Suzhou play important roles in Chinese history for easily the last two thousand years, but not Shanghai;  in 1840 it was a sleepy fishing village, trading internationally in a very small way. But the treaty with Britain at the end of the First Opium War (link) opened it as a trading port with Europe and it has grown spectacularly ever since. 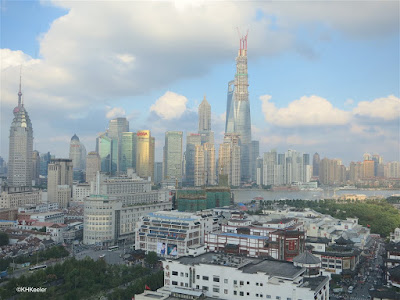 Shanghai is brilliant at night, its buildings light up in very modern displays of light and color. 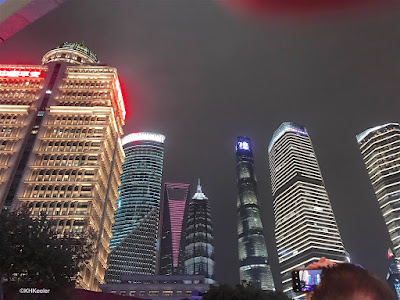 In April 2019 my tour with the San Francisco Society for Asian Art took an excursion to the studio of Liu Jianhua (link, link) in western Shanghai near the Hongqiao Airport. The studio was in what I would call an art district, distant from the city center. Coming back, the bus driver learned that, despite the fact it was Saturday afternoon, the raised freeways that cross Shanghai were backed up, so he drove us along city streets. I took pictures every time we stopped for a stop light. So here are views of Shanghai as residents likely see it.

First stop light. The street here had sycamores and palms. Singapore is fairly far south and near the coast. Websites compare its climate to Washington D.C., but I think it is warmer, more like the Virginia or the Carolinas. These are big established palms and Washington DC is just starting to plant palms after a series of warm winters (link). On the ground here, some shrubs seem overwhelmed by the ground cover. (Sweep over pictures to enlarge them.) 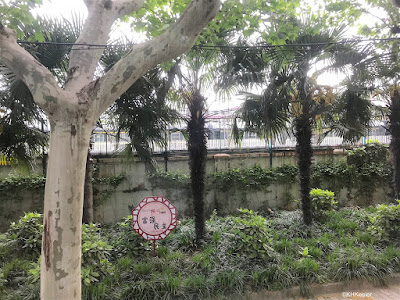 Next stop. More sycamores and I think the ground cover is liriope, Liriope sp., (Asparagus family, Asparagaceae), native to southeast Asia but widely planted in the U.S. South. There are other narrow- leaved ground covers for mild climates, however. Note the big buildings in the distance: it is much more urban than the roadside seems. 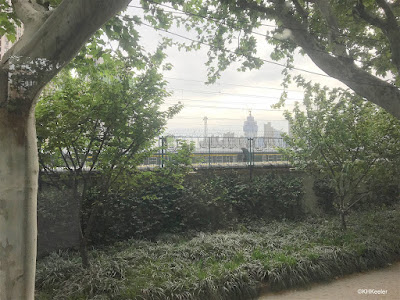 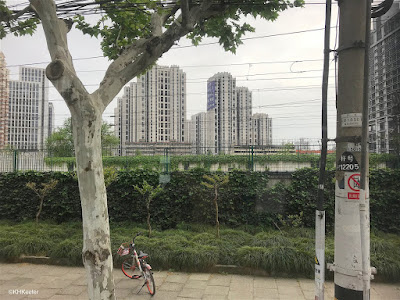 Two different plants at this stoplight, but I can't name them. 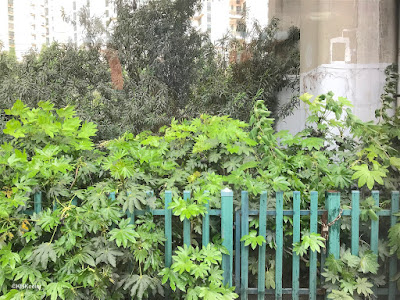 Next stoplight: a hedge of heavenly bamboo, Nandina (barberry family, Berberidaceae), a native Chinese shrub they think highly of. I can't identify the tree (ginkgo? a cassia?). Big pedestrian bridge in the background. 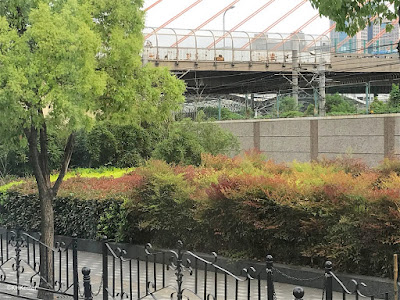 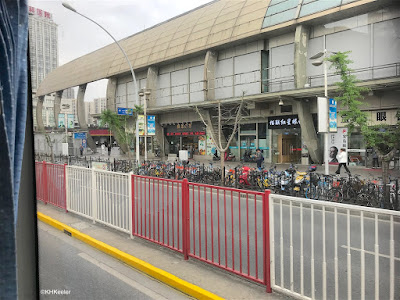 Cars parking. Nice accidental contrast in the two stoplight stops. Shanghai is prosperous so the highways are full of cars and parking is in short supply and very expensive. 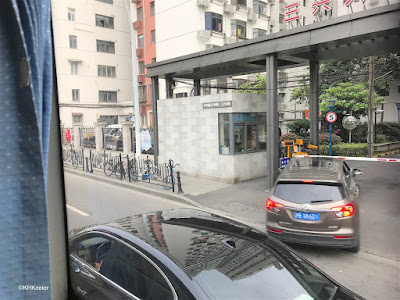 Lots of towering apartment buildings. Small trees planted between them. 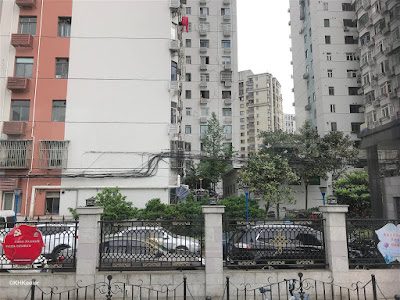 These trees are ginkgoes (Ginkgo biloba, in its own family, Ginkgoaceae), native to China. Very rare in nature, it is widely planted. 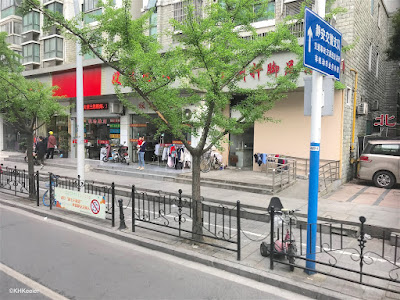 The streets become more built-up, with this bicycle lane along the wall. Notice the row of planter boxes at the top of the wall. 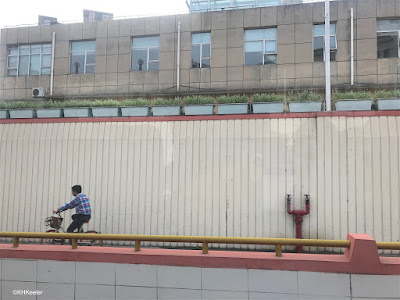 Into a tunnel where we waited for another stop light. 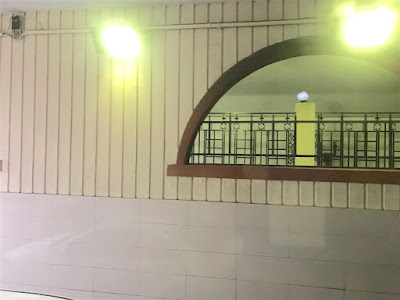 A long slow section in the tunnel, beside the bike lane and below the flower boxes. 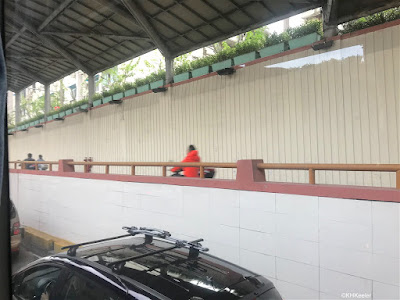 Waiting again, up above the bus next to us. 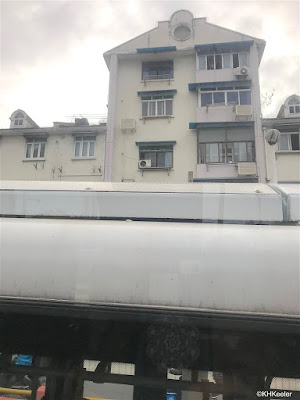 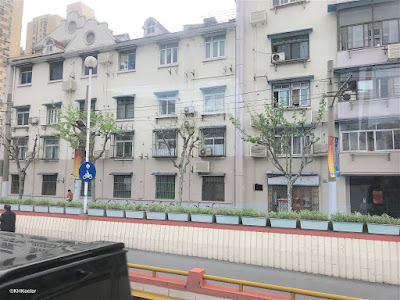 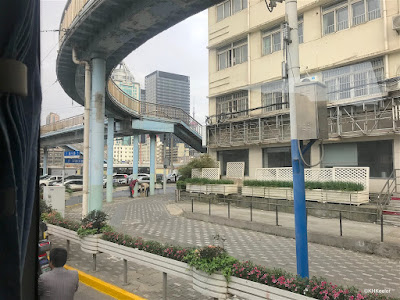 Closer look at the flower box above: pinks (Dianthus), English ivy (Hedera helix) and I'm not sure what the dark-leaved plant is. Something else in the boxes across the road. 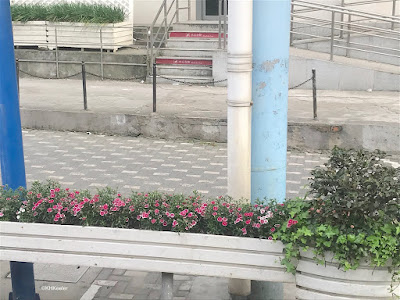 No plants visible here. The store on the right really is 7-11 (did you recognize the orange, green and red stripes?) which has stores all over Asia. 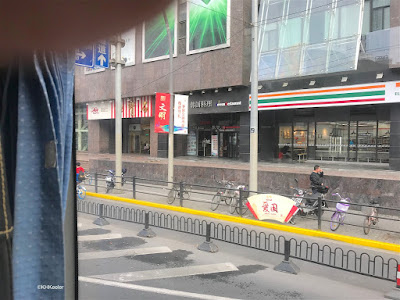 The woman is cleaning the street, wearing a mask. Wearing masks--protection from pollution or germs or pollen--is common. So is cleaning of public places, but there are so many people (and the air is so polluted) that it is never-ending. There are more plants in this picture than at first glance: a ginkgo is in the background, there's a hedge or groundcover by the building beyond it, and something is growing in the boxes under the windows of the nearest building. 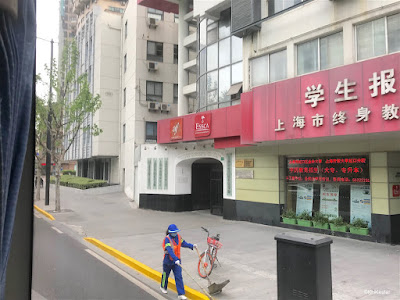 We are now close to the big tourist area around the Bund. Here is a tiny formal garden set along the street. All the big green loops are covered in plants, the red and salmony "plates" are filled with small plants, the shrubs are neatly shaped into balls. 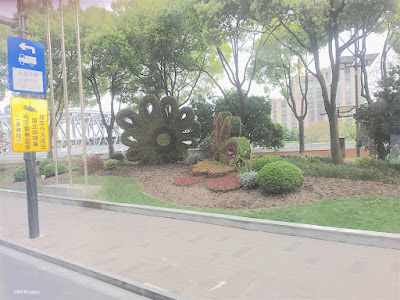 And then we are by the river, last stop light before our hotel. 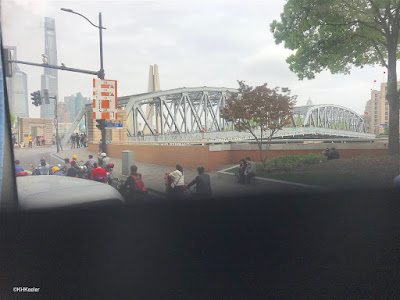 If I did this on the U.S. East Coast, the plants would be quite different. None of this was through residential neighborhoods, so this is probably greenery maintained by the local government. In the U.S. we have really big old trees in cities, but if all of Shanghai is only 180 years old, these outlying areas are probably much younger, so planted trees cannot be big yet. But car exhaust, city heat, and the activities of thousands of people stress plants; these were probably chosen to be hardy and not grow too large. I like that they are mostly native to China; when I saw annuals in Shanghai they were often international species like petunias (Petunia) and marigolds (Tagetes). (Both native to South America.)

The streets in my photos rarely have people walking, which seems puzzling. Perhaps that is because it was Saturday afternoon. So, while Shanghai has millions of people, you are not necessarily always in a sea of people.

Posted by A Wandering Botanist at 2:51 PM