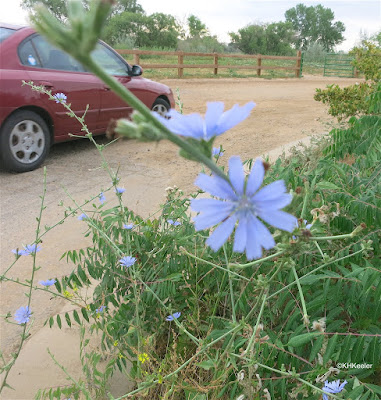 You see chicory on the roadside during the morning commute, a splash of bright blue. Coming home, you don't notice it. When you think about it, the blue flowers aren't generally out in the fields either.


This isn't new. Chicory (Cichorium intybus, sunflower family, Asteraceae) is a European plant whose German names include Cichorienwegwarte and Gemeine Wegwarte. Wegwarte means "way waiter," or, as better English, "waits by the road". The Germans tell the story of the lovely blue-eyed maiden who waited for the return of the crusader who had pledged his love before departing to free Jerusalem. Weeks passed, and then months. Finally, her parents told her to find another man. "No!" replied, "I'd rather turn into a common wildflower than forget my love!" God granted her wish, turning her into the blue-flowered chicory, and she waits still.

Roadsides are good places for plants that live more than one year but are not particularly strong competitors. More aggressive plants keep chicory out of fields, and that is aided by the fact that it is edible. Animals from rabbits to deer to people eat chicory. It doesn't do well as a crop weed because annual crops are plowed up and replanted each year; their weeds have to produce a lot of seeds before the crop is harvested. Chicory does not grow and set seed as fast as annual weeds, though there are places where it is a major weed problem. The roadside is lovely from chicory's point of view; just disturbed enough to keep taller plants from shading it out and not so disturbed that it has to start from seed each year. 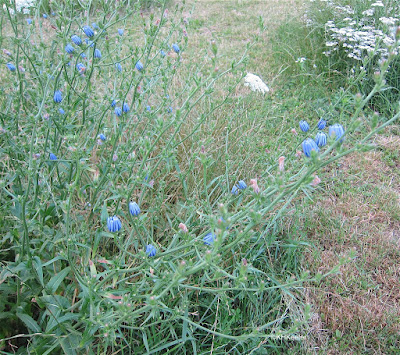 Chicory appears to vanish in the afternoon because the flowers are open only part of the day. They open early in the morning but close by about noon. Swedish botanist Carl Linnaeus planned a floral clock that would give the time from the opening and closing of flowers. Chicory, he found, opened precisely at 5 am and closed at 11 am. That was in Uppsala, Sweden. Latitude and day length both affect flower behavior; check out the timing in your area.

This is a plant that I always thought of as a pretty flower but a bad weed.  Reading about it. I discovered it is probably better seen as a crop plant not used in the United States.

It is found in every state in the U.S. and most of Canada (see USDA map), but only Colorado and New Mexico list it as a noxious weed. Eastern wildflower books describe how to transplant it into your yard. Weedy but not a bad weed in North America.

It was almost certainly brought to the U.S. to be used as food and forage. Thomas Jefferson bought seeds, probably from Italy, to grow at Monticello. In 1795, Jefferson praised it in a letter to George Washington, as a ground cover and cattle fodder, and a tolerable green. 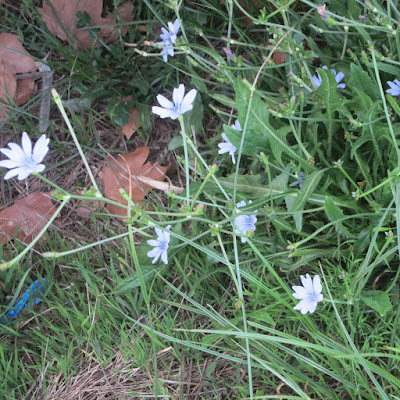 The leaves and new shoots are edible raw and cooked, though they become tough and very bitter later in the growing season. Cultivated chicory leaves are blanched, that is, the young plants are covered with dirt or mulch because white leaves are much milder. Likewise, Europeans grow chicory indoors in winter, producing white shoots, considered a delicacy. The roots, roasted, make a coffee substitute, which was widely used when coffee was in short supply during the world wars, and is currently added to coffee in a blend many people love.

Chicory, Cichorium intybus, is a member of the genus Cichorium with about ten species native around the Mediterranean Sea and to western Asia, in the very large sunflower family, Asteraceae. It is closely related to endive Cichorium endiva. Both chicory and endive have been eaten by people in the Mediterranean since at least Biblical times, though it is not certain quite where they are native. Endive is a biennial often grown as an annual, while chicory is a spreading perennial, but they are hard to tell apart in historical and archaeological records. Furthermore, the names are not well distinguished historically, for example Latin dictionaries give both chicory and endive as the definition of intibum, and in parts of France, (witloof) chicory is called endive and endives are known as chicorée. Wild endive is an English common name for chicory, although they are different species.

Both chicory and endive are closely related to lettuce (Lactuca species) but more bitter, especially compared to modern cultivated lettuces (wild lettuces are quite bitter).

The name chicory and the scientific name Chicorium both go back to the Egyptian name for it. The species epithet, intybus, is based on a Middle Eastern name for the plant, hendibeh. 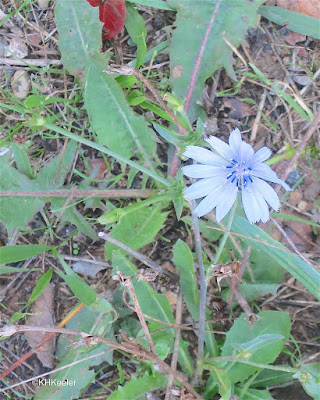 Ancient Egyptians ate chicory, as did generations of Europeans, but it was probably not cultivated before the 17th century. (The Greeks and Romans cultivated endive). Tracing chicory back through history means looking for unfamiliar names. Apparently chicory was more commonly called succory, The Oxford English Dictionary describes succory as a variant way of saying and spelling chicory, coming from Middle Low German. They seem pretty different words to me. Many popular authors write that succory is from the Latin verb succurere "to run under" and refers to the roots of chicory. In my Latin dictionary the word is succuro, and means "to run under, to run to help, hasten to the aid of, help, aid, assist," which doesn't seem a great plant name. I am not particularly persuaded by either explanation. Other common names in English include blue sailors, ragged sailors, bunk, coffeeweed, blue daisy, and blue dandelion. The blue is obvious, the flower looks kind of ragged, but the association with sailors is obscure to me. Bunk was a term for an aromatic medicinal root used by Arab physicians, coming into English briefly in the 1600s, but, in the Oxford English Dictionary, not tied to chicory. The other names seem logical.

Radicchio is a cultivated variety of chicory, as are some varieties of escarole. Witloof is another, broadleafed, chicory variety, that is grown in Europe, blanced, and eaten as pale leafy shoots (chichons).

Chicory has been used medicinally of course. Historical uses include a preparation of the roots used as a mild sedative, syrup taken as a gentle laxative, and poultices that were put on bruises. Modern studies suggest it is effective for treating loss of appetite and indigestion. As a food and in medicinal doses chicory seems quite safe, but its effectiveness as a medicine means it can worsen some conditions (see, for example, webMD). 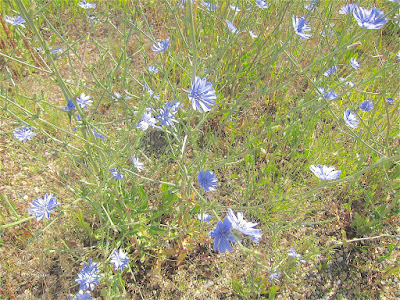 This little plant has been a food and forage plant for thousands of years. We brought it to North America and then forgot it. The roadsides where we commonly see it are poor places to gather it--the soil is likely contaminated--but buy it as radicchio or escarole or grow it for yourself.

Posted by A Wandering Botanist at 3:15 PM