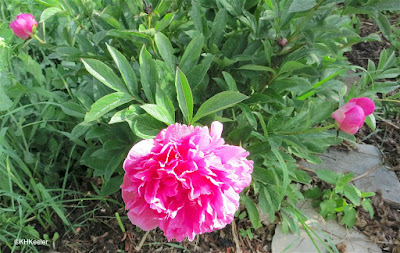 The Chinese herbal supplement lists as an ingredient "Radix Alba Paeoniae." It doesn't look like a standard botanical term and a Google search is confusing.

The ingredients of Traditional Chinese Medicine (TCM) can be puzzling, but there is a system to it. This post is about interpreting Chinese medicinal ingredients.


In brief: the ingredients in Chinese medicines are given as plant parts in a pharmaceutical jargon.

First, the ingredients of Chinese medicines are in "pharmaceutical botany." Western pharmaceuticals have made-up names and then define their contents chemically. Tylenol is made of acetaminophen, which is 4-acetamidophenol, which has the chemical formula, C8H9NO2, and a ring structure (see structure link). The blood pressure medicine lisinopril is C21H31N3O5, in the form N~2~~(1-carboxy-3-phenylpropyl) lysylproline (and some related molecules), see its structure: link. Online medical sites will tell you what these chemicals do and if there are any safety concerns.

Chinese medicine sends you to plants, not to chemistry. Increasingly Chinese herbal medicines are being packaged for English speakers. One bottle of pills offered as a dietary supplement that I looked at listed ingredients including Dianthus superbus herb, Plantago asiatica seed, and Akebia trifoliata stem.

These are Asian species, often relatives of familiar plants. Dianthus is the genus of carnations and pinks. Various pinks have been used as medicines throughout European history. Here is a link to a paper about the clove pink (Dianthus caryophllus) as a western herb (link). Dianthus superbus is a Eurasian pink, called fringed pink, that the Chinese use medicinally. (Pictures of Dianthus superbus from Google link). See a report on Dianthus superbus from Plants for a Future, a group that promotes edible and medicinal plants, link. Herb means that the medical preparation uses the whole (above ground) plant.
The second ingredient is Plantago asiatica seed. Plantago is the genus of plantain, the common lawn weed of the U.S. Plantains were important European herbs. WebMD lists traditional uses of greater plantain, Plantago major link. Plantago asiatica is Chinese plantain and looks very similar. You can search on Plantago asiatica and find references like this one: link reporting that seed extract helped with obesity treatments. In the formula quoted, you will notice they used Plantago asiatica seed.

Akebia trifoliata stem. The third plant is Akebia trifoliata. Akebia is an Asian genus and there is not likely to be much information from European sources. Wikipedia says Akebia trifoliata has the common name three-leafed akebia and is native to China, Korea, and Japan. It is a member of a plant family I don't remember hearing of before, the Lardizabalanaceae. I copied the name and searched. Plants for A Future had a profile on it: link.

So that is what that list does, gives you the plant name and the part used.

Older Chinese sources used a more latinized way of listing the ingredients. Here are three ingredients from a supplement for reducing colds: "Fructus Forsythiae, Flos Lonicerae, Radix Alba Paeoniae." The pharmaceutical Latin taken up by the Chinese is close to but not quite the same as scientific names. The words fructus, flos and radix are the part of the plant: fruit, flower, and root, respectively. Then words Forsythiae and Lonicerae are pretty much the scientific names for those plants, but with different endings. I believe the endings represent the genitive (possessive) case in Latin, thus the first would be read "fruit of forsythia" and the second" flower of lonicera." In botanical Latin, genus names such as Forsythia, are in the nominative (subject of sentence) case, not the genitive, which has different endings (think of word changes to give meaning such as plant vs plants in English). In any case, the first ingredient is fruit of Forsythia. Species of Forsythia are commonly grown as ornamentals, under the common name forsythia, and their medicinal uses can be found in a search.

The second, "flos Lonicerae" is "flower of Lonicera." Search on Lonicera. Lonicera is the genus of honeysuckles, a group with 180 species, native from North America to Asia. Again, a search on Lonicera finds a variety of medicinal uses, in the traditional European literature and in Chinese medicine.
The third, "Radix Alba Paeoniae" is root of white peony. Paeonia is the only genus in the family Paeoniaceae and was traditionally used medicinally, especially the roots, in both Europe and Asia. A search on "Alba" led to lots of odd places because alba is the feminine form of the Latin word albus, white. A search on "Radix Alba Paeoniae" did get to things that say white peony root. (White peony root comes from  the common Chinese peony, Paeonia latifolia. The peony in the photo at the top of this post is the common peony; it has flowers of many colors.)

The other names for plant parts that you are likely to see are rhizome and semen. A rhizome is an underground stem, generally running laterally, in contrast to a root, which goes down into the soil. Semen is Latin for seed.

All of these are translations from a Chinese system thousands of years old into modern English. Almost immediately after European contact in the 1400s, Europeans tried to write Chinese in their letters, Roman letters. There are several systems available, which is part of why you can see really different spellings for the same Chinese words. Today, the People's Republic of China uses a system called Pinyin when it wants to write its language in Roman letters. Chinese medicines generally give the Pinyin for the herbs. Qu mai is the Pinyin version of the name for Dianthus superbus herb, although properly Pinyin has accent marks to distinguish different words (mài is not the same as mái or māi or măi.) So if the search for the name "Dianthus superbus herb" is frustrating, try Qu mai.

Chinese medicine texts go back to at least 2,600 BCE, so the written word dominates and the characters that name the herb are the definitive name. Some Chinese medicines provide those on the bottle. For example, Dianthus superbus herb, Qu mai, above, is given as 瞿麦. Chinese is full of homonyms, words that sound alike but are written differently, so 瞿麦 is clearer than Qu Mai. However, noting the difference between Chinese characters takes practice (as does watching for the difference between m and n in English of course) so the Pinyin is much easier to work with for non-Chinese speakers.

In writing this post, I looked things up in two encyclopedias for Chinese medical practitioners belonging to my husband, a retired licensed acupuncturist. I used the internet to look up additional information. I found a lot of inconsistencies on the internet, some of which are certainly errors. That is not especially surprising given the area combines the challenging fields of Chinese, Latin, botany, and medicine. Nevertheless, even sources I normally like (such as webmd) had misleading or incorrect information. Plant and herbal information from European and American sources is pretty good online these days, and I was not used to turning up so many problems so quickly. My advice, then, is when looking up Chinese medical ingredients online, take care with the spelling, and if you find a contradiction, check at least one other, unrelated, site.

In summary, Chinese medicinals provide ingredient lists of plant parts that have been used for thousands of years. Those are precisely written in Chinese characters, which have be rendered into Roman letters, usually in the Pinyin system and then converted to pharmaceutical Latin, or, as in my first example, modern scientific names. Pharmaceutical Latin is similar but not identical to the Latin names used in western science but should allow finding the genus of the plant and comparing both what Chinese medicinal sources say about its uses but also what it (or, more often its European relatives) have been used for in European herbal medicine.
Comments and corrections welcome.

Posted by A Wandering Botanist at 2:58 PM