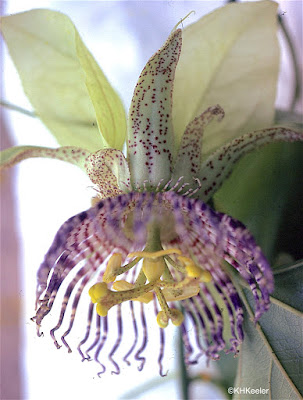 The passionflowers, also called passion vines and passion fruit, genus Passiflora (passionflower family, Passifloraceae) include about 625 species, all but a couple dozen native to the Americas.

Almost all species of passionflowers are vines, some small herbaceous vines, some big woody ones (often called lianas). Passionflower leaves can be very diverse but are often lobed. The vines have tendrils, and round fruits full of seeds. All of these, but especially the flowers, make them quite easily recognized. And they've been carried around the world, so you might encounter one just about anywhere.

The name is not about tropical romances, but the passion--suffering and death--of Jesus Christ. Early missionaries to the Americas saw religious symbolism of the crucifixion in the flower. Below is a diagram of the symbolism the missionaries would point out. In the printed literature, mostly authors allude to the symbolism but don't explain it, so I did. The internet is better--though you can get several different versions of the symbolism (references below). 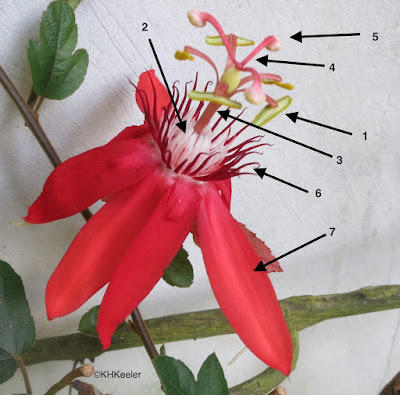 The five anthers represent the five wounds (1 in the photo above, not the usual species but the best photo I have for showing the parts). The fleshy threads within the flower are the crown of thorns (2). The column of the ovary represents the pillar of the cross (3). The three styles are the three nails nailing Jesus to the cross (4). The round stamens symbolize the hammers used to drive in the nails (5). The calyx is the nimbus (luminous cloud or halo, also called a glory) that surrounded Jesus (6). The ten sepals and petals represent the ten faithful apostles, omitting Peter who denied him and Judas who betrayed him (7). In addition, the tendrils of vine were said to represent whips and the leaves spear heads of the Roman guards. An awesome religious lesson from one flower.

The fruits of some species are edible. The South American species Passiflora edulis ("edulis" means edible) is raised commercially for fresh fruits and jams.

They taste better than they look.

Most passionflower species are tropical plants, intolerant of frost and growing in the wet tropics. That puts them in an environment where animals are active all year, day and night. They are at risk of being eaten by animals, particularly insects, all the time. Consequently they have evolved a number of traits that protect them. Chemically, the leaves contain a complex mix of chemicals, cyanogenic glycosides, alkaloids, flavinoids, saponins, tannins, and more. Throughout the Americas, passionflower leaves are used as medicines, taking advantage of this chemistry. They've been used for a lot of things, but the most common is as a mild sedative. A group of quite spectacular butterflies, called passion vine butterflies, the genus Heliconius, (photos link), lay their eggs only on passionflowers, their larvae safely taking up the cyanide-producing glycosides which are then released when they are eaten by a lizard or bird, making the predator avoid the next butterfly. The relationship is much like monarch butterflies and milkweeds (milkweed story).

But the relationship of passionflowers to passion vine butterflies and other would-be consumers in their environment has selected for other defenses as well. 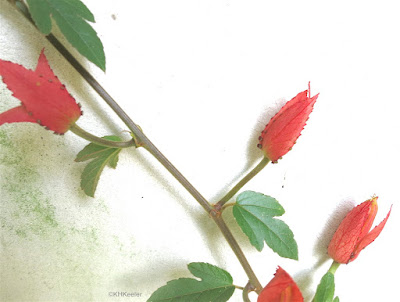 Above, buds are lined with dark circular structures, showing up particularly well around the buds of this species. Those are extrafloral nectaries, which produce sugar-water. Sugar-water attracts ants. Ants are predators that will take caterpillars and anything else they can capture as prey to feed their larvae. By attracting ants to their flower buds, passionflowers increase the chance that ants will find and remove their enemies. Passionflowers have several types of extrafloral nectaries, on the buds, on the leaves, at the base of the leaves. It is not surprising there is an ant on the leaf in the photo of the open flower (below). 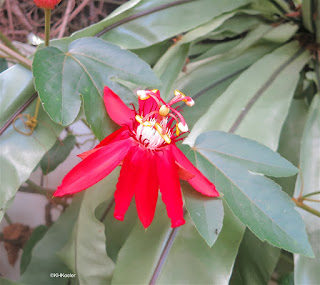 But passionflowers also have dots on the edge of their leaves that are not nectaries. These, usually yellow, were shown experimentally to be "imitation butterfly eggs." When a Heliconius butterfly lays her eggs on passionflowers, she want lots of food for her larvae. Dots that look like eggs fool  a butterfly into thinking that if she lays her eggs on that leaf, her caterpillars will be in competition with slightly older, cannibalistic caterpillars, not a good prospect...so she goes elsewhere.

And some passionflowers have orangy structures that resemble butterfly larvae. Same principle as the imitation eggs. 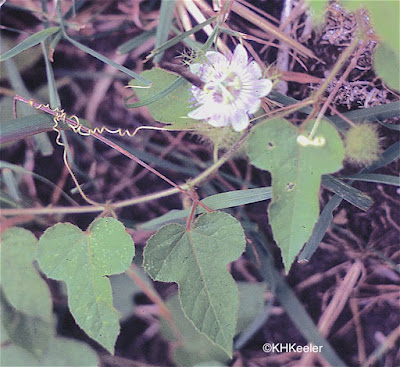 There is much more on passionflowers. They have other protective structures, such as dense hairs to foil caterpillars. Leaf shape varies dramatically between species, within species and even within a plant. That is believed to make it harder for Heliconius butterflies to find them. And in the human sphere, there is also lots more about passionflowers. You could grow a dozens of different species: the internet has instructions for that. To enjoy the fruits there are recipes available. Medical sites have information on their medical uses. That same handsome flower that attracted the missionaries has made passionflowers a homosexual emblem, originally in Japan but now world wide. This is just an introduction. Notice passionflowers!

Posted by A Wandering Botanist at 7:26 PM