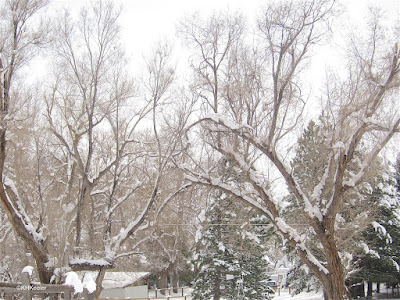 When considering winter in Colorado, I often want to write that plants rest, but in fact, I don't think that is true. A rest is defined as a time to relax and recover strength. Plants drop their leaves and go dormant in winter because they cannot move ice in their tissues, let alone use it to grow. Furthermore, water expands as it freezes, so freezing rips up most cells. There is no recovery of strength in winter, only waiting out an impossible season.

That said, the plants that survive through the winter are an elite minority.

Very few of the world's plants have tissues strong enough not to be destroyed when the water in them freezes. There is water in the cells of the branches and trunks of every tree in a northern forest. Those cells have to survive the expansion of water. Shutting down in dormancy is a privilege for those not killed by a freeze. The number of species, genera, and families of plants that inhabit frost-free regions is very much greater than those of areas with hard freezes.

People are mammals. Our bodies generate warmth, rather than operate at the temperature of our surroundings. Modern humans build houses with furnaces and cars with heaters to be comfortable and active when the temperatures outside are below freezing. We easily forget how unusual that is. Frost shuts down plants, reptiles, amphibians, fish, insects, and other invertebrates. The only exceptions are mammals and birds. 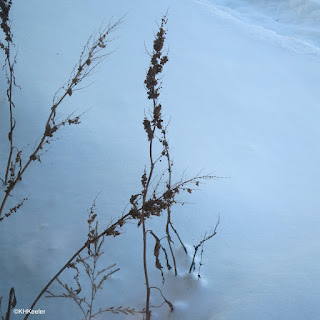 Winter is a period of hardship. Plants cannot transport ice in their tissues as they do water, nor use it in any chemical reaction. Small plants die back to the ground. The soil is a good insulator and in most places not too far down, it remains unfrozen, protecting the plant cells. The bush morning glory of western Nebraska, Ipomoea leptophylla (morning glory family, Convolvulaceae), is the northernmost perennial morning glory. Most morning glories, like heavenly blue, Ipomoea nil, are immediately killed by frost. The bush morning glory grows from a big root tuber, about three feet down in the ground. New shoots in the spring come from the top of the tuber, which is apparently deeper in the ground than frosts get in western Nebraska.

Shrubs and trees have trunks and stems that survive frost. There are several adaptations for that. Physical strength from wood is one. Antifreeze-like compounds in the sap, decreasing the freezing point, is another adaptation to cold. The ice is always a threat, though. You can see that in roses and other shrubs in the spring; some branches survived the winter but others were killed back below one or more nodes. 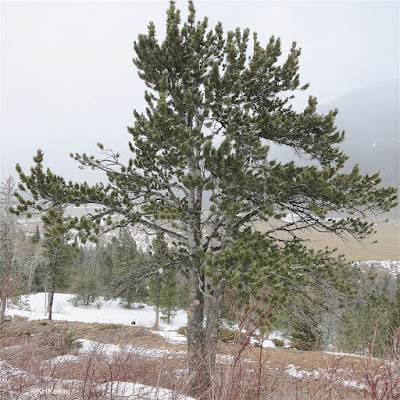 And then there are evergreens. To an ecologist, evergreen means that a plant keeps its leaves all year. But in a North American context, it refers to pines and other conifers, because, especially as you get farther north, they are the only plants that keep their leaves all winter. We speak of pines as having needles, but in fact pine needles are very narrow leaves, "needle-like leaves" in botanical jargon.

The conifers (it means cone-bearing) plants are gymnosperms, older than flowering plants, angiosperms. Both groups produce seeds, a major innovation in the evolution of plants, but gymnosperms fertilize open cones, while angiosperms closed the cone and developed the flower around it, so that the seeds are much better protected. Flowers and protected seeds worked really well and angiosperms took over much of the world. In temperate regions, they pushed gymnosperms to cold places with short growing seasons. The leaves of angiosperms capture more sunlight and produce sugars and starches faster than the needle-like leaves of gymnosperms, but they are a liability in winter. (Trees that drop their leaves are called deciduous, the opposite of evergreen. For variety of speech we also call the deciduous trees broad-leafed, and the conifers needle-leafed, since across most of North America almost all the former are angiosperms and almost all the latter gymnosperms.)

Broad leaves as a whole do not function below freezing. Evergreen angiosperms like holly (Ilex aquifolia, holly family Aquifoliaceae) and creeping hollygrape (Berberis repens, barberry family, Berberidaceae), growing in areas with mild winters, are evergreen, but most angiosperms drop their leaves. In winter snow and wind, branches tipped by leaves are more likely to break than leafless branches. In 1995, Boulder, Colorado had a heavy snowstorm on Sept. 21. Everything was green and then it snowed more than eight inches. Across the Front Range, millions of trees were damaged. I walked through the city the next day. The pines and spruces were sagging under the weight of the snow, but maples and oaks, their leaves still green--there hadn't even been a frost--had broken branches, some very large. Being an ecologist, I counted trees with and without broken branches. Virtually all the broken branches were on broad-leafed trees. The pines and spruces had almost no broken branches. Alas, that was almost 25 years ago and I don't know where I put the numbers. But I was really impressed to see how differently the two kinds of trees weathered heavy snow.
Not only do conifers shed heavy snow, their thick, highly insulated needle-like leaves can turn on photosynthesis and make a little carbohydrate on the winter afternoon when the temperature of the snow-covered world briefly rises high enough to thaw the ice in their cells. 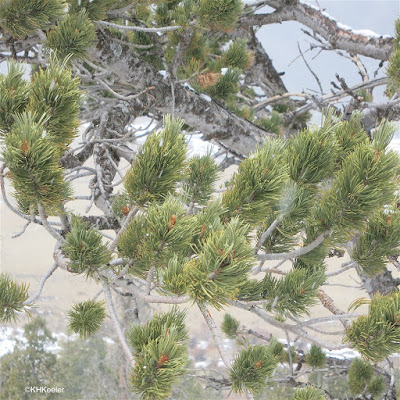 The composition of plants we see in forests and grasslands is the outcome of competition between plants of different abilities. Broad-leafed trees outgrow conifers when it is warm, but must drop their leaves or lose branches in winter. That makes their growing season shorter than for evergreens and adds the cost of creating a whole new set of leaves in the spring. Conifers grow slowly, get longer use out of their needles, and are much better adapted to winter.

Even though winter is a hardship, those plants that can survive it can spread to vast areas of growing space not available to their frost-intolerant relatives. Growing in a place with winter has other benefits as well. Cold reduces the number of plant-eating animals. Cold kills large numberss pf invertebrates such as insects each fall. A few survive but have to build up their numbers in the spring. The same applies to fungi and bacteria that attack plants. In frost-free places, plants are eaten by insects, other invertebrates, herbivorous reptiles and amphibians, fungi and bacteria all year long. The drop in plant-eating organisms every winter is a boon to temperate zone plants.

Though of course mammals and birds remain a winter threat: Below is an elk eating pine needles in April, Estes Park, Colorado. Note recent snow on the ground. 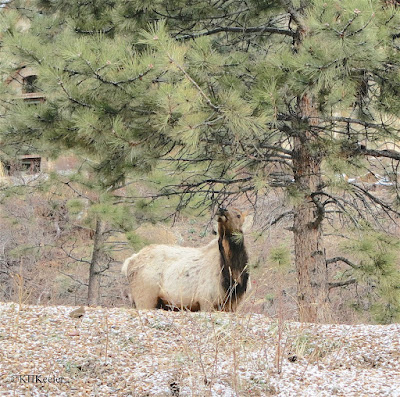 So, presumably, if they could speak, temperate zone plants would tell me that going dormant in winter is an acceptable price for being able to grow all across North America.
No, plants in winter are not resting. But enduring winter lets them leave behind less hardy competitors and enemies and to grow in wonderful places.

Posted by A Wandering Botanist at 2:47 PM