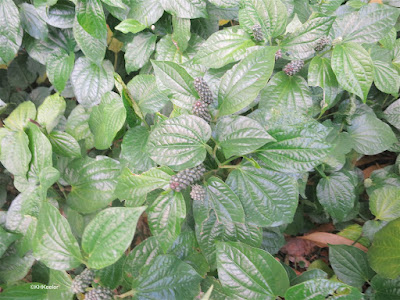 Black pepper, Piper nigrum (pepper family Piperaceae) has been an important commodity for millennia. We get it as a dark powder, or if you have a pepper grinder, little round pepper corns.

Because those little pepper corns are small and travel well, they were traded all across the Old World for many centuries. The plant is a vine that will climb to tall trees. The pepper corns are the dried fruits. They develop as long clusters. Black pepper is created by drying the unripe fruits in the sun. The outside covering, initially green, wrinkles, shrinks, and turns black in the sun. White pepper is made by removing the red skins from ripe pepper corns, then bleached and dried in the sun. Green pepper is produced by pickling or freeze-drying fresh green fruits.
It is native to the Malabar region of southwestern India but was transported all over the tropics long ago. It has been cultivated for at least 3,000 years and probably was collected long before that. Today annual production is more than 546,000 tonnes, mostly from Vietnam, India, Indonesia and Brazil, making it one of the most important spices. Certainly, it is the only spice routinely put on every table across the United States.

Cultures all over the world add pepper to their food. It was one of the chief spices sought by Europeans when they started exploring the world in the 15th century. In the 16th century a ship carrying pepper back to Amsterdam made 400% profit for the investors (invest $100 get $40,000).

Black pepper is not at all related to chili peppers, genus Capsicum in the tomato family, Solanaceae. Chilis (spell it chile and chilli if you prefer) are native to Central and South America, where they have been grown for at least 5,000 years. The similar name, pepper, is because Columbus and explorers after him came to the Americas seeking pepper, and chilis were what the Native Americans offered when they understood what the Europeans were looking for. And chilis were a hit, so they were carried all over the world almost immediately. One advantage chilis have over black pepper is that they grow as an annual in cold climates, so pretty much everyone in the world can grow them. Black pepper is a frost-intolerant perennial vine that is confined to the tropics.

Black pepper's virtues seem to be as a helper. In food, it enhances other flavors. The most important compound in black pepper is the alkaloid piperine. Piperine has been shown to stimulate digestive enzymes, enhancing digestion. It also has antioxidant and anti-inflammatory activity and has reduced arthritis symptoms and tumor production in animal studies. It also inhibits dangerous bacteria such as botulism. Perhaps people felt better after they ate it, perhaps those who used it were sick less. Perhaps it just appeals to peoples' taste. Whatever the reason, it is a worldwide dietary staple. 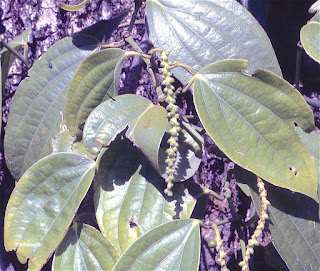 Email ThisBlogThis!Share to TwitterShare to FacebookShare to Pinterest
Labels: a wandering botanist, spice