Fireweed  is one of the most recognizable flowers of the Rocky Mountains. They are tall spikes of magenta flowers, easy to spot and to recognize. 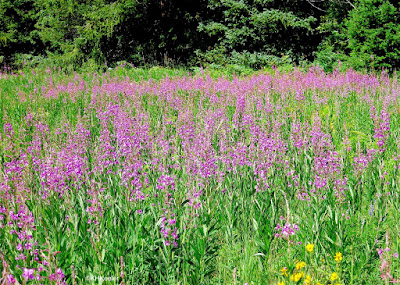 I planned to write about fireweed as an iconic Rocky Mountain wildflower--and it is!--but that's just part of the story. So, first, the Colorado angle:

Fireweed grows about three feet tall, with bright magenta flowers, green foliage that turns a lovely shade of red in the fall, and seeds that are wind-dispersed by fine white hairs. It is called fireweed because it blooms dramatically after the fires that periodically burn the Rocky Mountains. It is almost entirely edible, though few people know to eat it. Altogether an attractive plant. 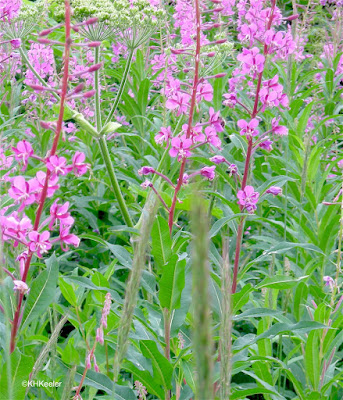 Where the story got complicated was, well, everything I thought I'd write about fireweed's name.

The issues are about names, not biology. Read it if you've been confused by the names given the plant, or skip to where it says End of Name Stuff.

First issue: Scientific name. In the 1700s, Linneaus named the plant Epilobium angustifolium (Latin epi = around, and lobium pod, because the petals sit on a pod-like ovary, angustifolium = narrow leaf) and put in the evening primrose family Onagraceae. That was the scientific name I learned, about 1977 when I first visited the Rocky Mountains. In the genus Epilobium are some 210 species, plus common hybrids, found all around the world, the phrase being "north and south temperate and arctic."

Fireweed, Epilobium angustifolium, is circumboreal (= found at high latitudes over the world). It is certainly from the Himalayas across Europe to all of northern North America. I cannot confirm northeast Asia since it isn't listed in China in the new Flora of China.

A quick online search will find fireweed's scientific name given as Chamerion angustifolium, Epilobium angustifolium, and Chamaenerion angustifolium. Chamaenerion is definitely obsolete--Wikipedia has this one wrong. Chamerion is used by most of the big US websites today (December 29, 2019), such as the USDA, ITIS, and the Forest Service. That name resulted from a splitting of Epilobium into two groups about 30 years ago. However, WFO, the World Flora Online, a consortium of plant experts trying to provide an accessible resource for names, puts fireweed back into Epilobium. WFO lists Chamerion but as a genus containing only one species and it is not Chamerion angustifolium. Likely the first plant named Chamerion is too different to be included in Epilobium, causing the change. Every other species (210) is in Epilobium. As far as I can tell, that is the current status of Epilobium. Splitting Epilobium would be helpful, but fireweed is unlikely to go back to being Chamerion no matter how Epilobium is split.

So, phooey. Presumably the North American websites and books will come into line with WFO but it will take time. And they don't have to, they can go on using Chamerion angustifolium if they aren't convinced by WFO--but the experts on fireweeds compiled WFO. For now, you can find two scientific name for the same plant. 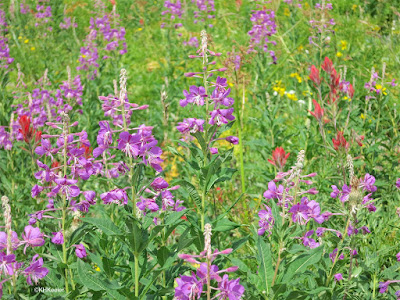 Second issue: Common name.  Any dramatic plant found from Asia to North America will have several common names, and fireweed does. In England they call it willowherb. But it is also called rosebay willowherb and great willowherb, to distinguish it from other species of Epilobium. And bombweed.

"July 25, 1944. London, paradoxically, is the gayest where it has been most blitzed. The wounds made this summer by flying bombs are, of course, still raw and bare, but cellars and courts shattered into rubble by the Germans raids of 1940-41 have been taken over by an army of weeds which have turned them into wild gardens.

"There is the brilliant rose-purple plant that Londoners call rose-bay willow herb. Americans call it fireweed because it blazes wherever a forest fire has raged. It will not grow in the shade, but there is little shade as yet in the London ruins. It likes potash, and the ruins are full of wood ash. It sweeps across the pock-marked city and turns what might have been scars into flaming beauty. You see it everywhere--great meadows of it in Lambeth, where solid tracts were blitzed, waves of it about St. Paul's. Behind Westminster Abbey bits of it are high up where second-story fireplaces still cling to the hanging walls." Lewis Gannett,  New York Herald Tribune  (from Durant, ref. below, pp. 66-67.)

So they called it bombweed. 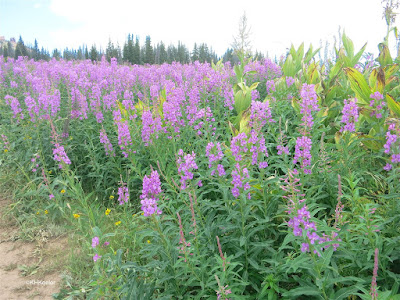 Third issue: species of Epilobium. When I looked at older Colorado wildflower books, I found five to eight species of Epilobium/Chamerion. In Ackerfield's Flora of Colorado (2015), there are only two, fireweed and dwarf fireweed (Epilobium/Chamerion latifolium). The non-dwarf fireweeds have been merged into one very variable species. A big part of the problem is that fireweed is a autopolyploid complex (see note on polyploidy below). Plants of fireweed can have 36 chromosomes (diploid) or 72 chromosomes (tetraploid). A few (under 10%) are triploid with 54 chromosomes. Genetic studies have shown that tetraploids repeatedly formed from diploids, so often plants in one population are very similar for physical characteristics with different chromosome numbers, and might have the same number of chromosomes as quite different-looking plants in a distant population. Studies in both North America and Asia have shown ecological patterns, with diploids dominating some areas and tetraploids other places, so becoming tetraploid is thought to confer some advantage, such as drought tolerance. Autopolyploidy like fireweed's is difficult for taxonomists because it is just one of many characteristics of the plants that vary within and between fireweed populations. Polyploidy has been studied a lot in the last 30 years, and generally experts have decided that autopolyploid complexes, like in Epilobium, are best treated as a single highly variable species. Which is why the WFO lists 11 subspecies and 20 alternate species names now included in Epilobium angustifolium; people tried naming the variants but recent studies of the big picture showed no consistency.

So fireweed is a widespread, common, easily recognized but variable species with several common names and currently inconsistent scientific names.

End of Name Stuff. More about the plant:

It seems a likely garden plant, but in fact it spreads so easily not many gardeners want to put up with it. Fireweed prefers full sun, disturbed ground, and plentiful moisture, which gardens tend to have. It spreads by underground stems (rhizomes) and can fill a gap quickly. When a fire sweeps through the forest, most of fireweed's rhizomes are deep enough in the soil that they are not seriously burned, so the plant grows and flowers dramatically after the fire. But it also gets around on even a slight breeze. The seeds are small and fly through the air well, which is why they filled London in 1944 and bloomed from the second story of bombed buildings. Fireweed can take over a garden.

You can find fireweed growing wild across all but the warmest, driest parts of North America, in forests, meadows, roadsides, seeps, after fires and storms and more. It is in no way special to the Rocky Mountains, but much of the Rocky Mountains is still in unplowed native vegetation, a situation that is increasingly rare in North America. In the Rockies, fireweed grows where it wishes.

The new shoots can be eaten like asparagus, the young leaves cooked as spinach, the old stems peeled and cooked or used to thicken soups (but peeling the stems is not particularly easy.) The flowers are beautiful in a salad. The leaves, dried, make a mild tea recommended for respiratory and digestive problems (but not studied scientifically; "no evidence" says webmd). Because it is totally edible, grows easily in disturbed sites, and comes back quickly from its rhizomes, fireweed seems to me like a plant that might have made a great cultivated vegetable, in some alternate history.

Native Americans turned the white hairs of the seeds into yarn or mats (mixed with dog hair or feathers) and the fibers of the stems were used as thread and to make nets.

Finally, the beautiful flowers are highly attractive to bees, hummingbirds, and butterflies. The plants are eaten by animals from muskrats to deer and are the host plant for at least five native butterflies. 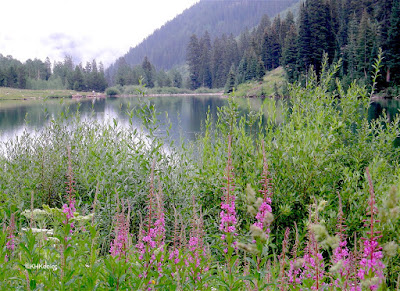 Note on polyploidy:
Ploid or ploidy refers to a set of chromosomes (made of DNA, containing the genes) in an organism. Most higher organisms are diploid, with two copies of each chromosome and so each gene. Polyploid means having more copies. One says triploid for three copies of every chromosome, tetraploid for four, heptaploid for five and so on. Polyploidy is the general term for "more than two copies." Polyploidy of any kind is very rare in animals. In plants it is rather common. The white potato (Solanum tuberosum) is tetraploid, wheat (Triticum aestivum) is hexaploid. Autopolyploids get the extra chromosomes by doubling within the species (potato). Allopolyploids are created by crosses between species and subsequent doubling of all the chromosomes (wheat).

Posted by A Wandering Botanist at 3:30 PM