Spring is the blooming time of many plants of the mustard family, Brassicaceae, from shepherd's purse to black mustard to clasping pepperweed, but also radishes, cabbages, and oilseed rape. The family is pretty easily recognized because the flowers have four petals in the shape of a cross, the source of the older (still valid) family name Cruciferae.
Blue mustard, Chorispora tenella, is one of the spring mustards. Actually, its seeds germinate in the fall, the young plants lay low over the winter and put on a spurt of growth in spring to flower in April or May, dying in the heat of midsummer. That life cycle is described as being a winter annual, and like many winter annuals, if conditions are right, blue mustard seeds will germinate in spring and grow rapidly, making them also "spring annuals."

There are eleven species in the genus Chorispora, native to Europe, Asia, and north Africa. Only blue mustard, C. tenella, has made it to North America. Blue mustard is found all across the western U.S. and very occassionally in the eastern half of the U.S. (see map); so depending on where you live it is very familiar or unknown to you. However, articles on its distribution suggested it has rather recently (last half of 20th century) spread, into the interior of Montana, to norothern Ohio, etc. Sometimes that means the plant just arrived, but it can also mean that it took some decades or even a century of being a rare exotic before it had sufficient numbers to spread its seeds widely. So, perhaps, if you don't know it, you live in a place where it will show up soon.
I found blue mustard distinctive and interesting and was disappointed that there seems to be no literature on it beyond what herbicide to use if there is too much in your wheatfield. For example, I did not find anyone who gave an opinion on how or why it was brought to North America: contaminant of imported seed? brought as a beloved green vegetable?

The scientific name is descriptive. Chori in Chorispora means "separate" in Latin, while spora is "seed." The combination, "separate seed,"  refers to the distinctive way the long narrow fruit breaks apart into units of one seed only (see fruit: link). It is much more common for a mustard seed pod to split along the sides, dropping all the seeds out, so pinching off individual seeds was a character the namer of Chorispora thought important. (Lots of mustards are identified by their fruits.) The species epithet, tenella, means delicate, a nice description.

For me in northern Colorado, the flower is imporant to identifying blue mustard. Most weedy mustards have yellow or white flowers. Where I live, there are no other delicate blue-flowered mustards. However, blue mustard's flowers look purple in some places and to some people, and rather pink in my photos, so it is not so much the exact color but that it isn't white or yellow. Purple mustard is an alternate common name. (Most places have at least one other weedy European non-white/non-yellow mustard, so don't rely solely on flower color to recognize blue mustard, check what your local choices are, then compare seed pot shape, "delicacy," hairiness of leaves.) 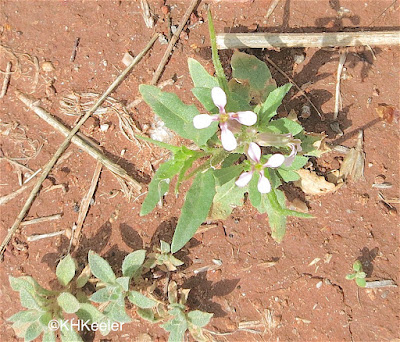 The USDA Plants database gives crossflower as the common name for this plant. That seems like a poor choice to me, since flowers shaped like crosses are characteristic of its entire plant family, the mustards. There are some 3,973 species, many very widespread in the Northern Hemisphere, almost all with cross-shaped flowers. (In some plant families, flower shape varies a lot). A spring walk will easily encounter five or six different species of mustards with cross-shaped flowers.  Calling it blue crossflower would make sense to me, but just crossflower--strange. But a traditional common name is traditional, not necessarily logical.

Blue mustard has a distinctive smell, so it is also called musk mustard. I haven't noticed the scent, but I haven't hiked off trail in a dense stand of blue mustard or had my dog come back from romping in it. The smell is generally described as unpleasant, similar to a stale dish rag.

Blue mustard is from eastern Europe/ western Asia, and today is found across North America especially in Colorado, Wyoming, and Nevada. It grows on roadsides, waste places, and the disturbed margins of hiking trails.

It can be a problem weed. When abundant, it reduces crop production, for example, of winter wheat. The milk of cows that eat it can have an off taste in their milk, making a problem for dairy farmers. Its abundant seeds contaminate commercial grass seed production. Since it is an annual, cutting off flowers before seeds mature is an effective means of control, though if the patch is well-established, buried seeds are likely to sprout for some years.

Interactions with animals are not much reported. Many pierid butterflies lay their eggs on mustards, but only one, the western white (Pontia occidentalis, photos), is reported to use blue mustard. I think that merely means no one has studied it, since the database I checked is worldwide (hosts.nhm.ac.uk, there should be multiple insects that eat it in its native range). Similarly, wild animals must eat it--leaves or seeds--but not much has been printed.

People eat it. The plant is edible and the leaves are a popular wild green. See the blog Awkward Botany for discussion and a lovely photo of a sandwich with blue mustard. Curiously, not one of my foraging books, including the western ones, mentions it, which reinforces the idea that its spread is recent, since online sites speak highly of it (another example link). 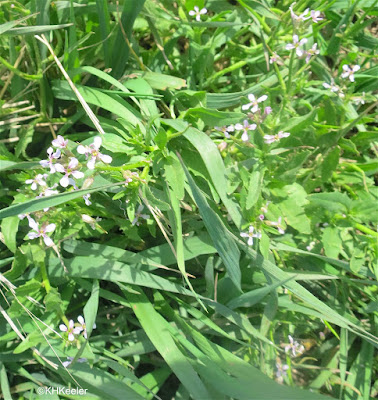 An interesting, tasty blue-purple mustard to watch for.

Posted by A Wandering Botanist at 2:24 PM