In ecology classes, some student always complained about the difficulty of learning the scientific names of plants, and I long ago came up with examples where the common name is no easier. One of those is puccoon.
The plants called puccoon are in the genus Lithospermum (borage family, Boraginaceae). Neither puccoon, which means "dye-plant" in Virginia Algonquian, nor Lithospermum. which means "stone seed" in Latin, is a familiar word to Americans. Stone seed and gromwell (what is a gromwell?) are other common names for Lithospermum species, but I learned it as puccoon.

I like puccoons. There are native spring wildflowers. There are about sixteen species native to the United States and most places have at least one species. Most puccoons have bright yellow or yellow-orange flowers. Worldwide there are about 80 species of Lithospermum, native all across the Northern Hemisphere.

In the Rocky Mountain foothills, fringed puccoon (Lithospermum incisum) flowers in April and May, bright yellow flowers in the grassland.

The bright flowers of puccoons attract a variety of insects. In western Nebraska, my class at the Cedar Point Biological Station did a lab on the pollinators of the puccoon there, Carolina puccoon, Lithospermum caroliniense. It flowers in May, when the weather is chancy. Some days it was too cold for insects. Other days we saw butterflies and bumblebees. The class observations suggested the butterflies were better pollinators from the plant's point of view because they were easily disturbed, moving to relatively distant plants. Plants of Carolina puccoon often had many open flowers, but they are heterostylous, with all the flowers on a plant having either long stamens and short styles or short stamens and long styles (see blog on heterostyly) that make it hard for a plant to self-fertilize. Bumblebees worked systematically, going to the nearest open flower which was likely to be on the same plant, so did not spread pollen to as many different genetic individuals as butterflies. However, on a chilly day, the bumblebees flew and the butterflies did not, so in a cool week, if any pollination happened, the bumblebees did it.
Not all puccoon species are heterostylous but most species have cleistogamous flowers. Cleistogamous flowers do not open and always self-pollinate. (Same system as in henbit, link.) They ensure seed is produced, even with no pollinators. So the variation in pollinator activity that we watched in western Nebraska did not necessarily have much effect on how many seeds the plants produced.

The seeds, technically nutlets, are small and very hard, earning the name stone seed.
Both fringed puccoon and Carolina puccoon are perennials, small plants rarely more than a foot tall. They spread a little, but form small clumps rather than great sprawls. No one knows how long most puccoons live. Dr. Stephen Weller, studing Carolina puccoon on the dunes along Lake Michigan over 10 years, calculated that the big ones were easily 100 years old. He visited the Nebraska sandhills and was shocked with how large the puccoon plants there were, suggesting to him the plants there were even older than 100. So we visualized the little puccons as miniature trees, living many decades, just at forest trees do. Just because a plant is small compared to a human doesn't mean it is young.


They are of course a food plant for a variety of native insects and insects that are not effective pollinators nevertheless feed on puccoon nectar.

Puccoon got its name because Algonquins in Virginia used the roots for dye. Moerman (Native American Ethnobotany) says hoary puccoon (Lithospermum canescens) root made a red dye (for chewing gum) for the Omaha and Ponca, Carolina puccoon (L. caroliniense) roots, boiled, made a red dye for the Chippewa, fringed puccoon (L. incisum) made a blue dye for tribes in the Great Basin in Utah, purple dye in Montana, and a red dye for the Thompson in southwestern British Columbia. I love dyeing with plants, but I have never had access to puccoons that I could dig up--kill--for the dye in their roots. When you add my estimate that the big plants with the most roots are older than I am, well, maybe seeing what kind of dye they make is not worth it.
This year I bought fringed puccoon seeds. If I can grow enough of them, under optimal garden conditions to speed growth, maybe I'll try fringed puccoon roots as a dye. Whether or not I try the dye, I'll have puccoons in my garden.

Bright-flowered, long-lived, native across North America AND with a funny name, puccons are great.


More stories like this in my book: NoCo Notables, 15 Wild Northern Coloardo Plants to Notice  available on Amazon 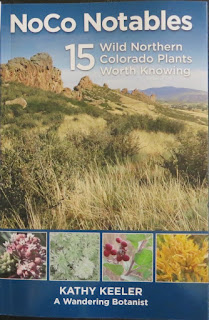 Posted by A Wandering Botanist at 4:00 PM