Future of the Alpine Tundra


The tundra is the coldest ecosystem on earth, found in the Arctic and high on mountains. As the coldest, it is changing rapidly from global warming. World temperature is up by about 2o Fahrenheit over the last 100 years (link) but at the poles it is up twice that (link). The average temperatures on high mountains (Alps, Rocky Mountains) are up 3o Fahrenheit during that time. In arctic tundra, the permanently frozen ground is melting, forming lakes, in other places it is drying out and has caught fire, while glaciers and sea ice are melting, all of these imperiling cold-adapted animals and plants and the people who depend on them. At high elevations, conditions are rapidly changing as well. On mountains, animals and plants will migrate higher for cooler conditions, but when the summit gets too warm, they will die out.

Projections for even modest global warming, such as another 2o Fahrenheit (1o Celsius), substantially shrink the area of alpine tundra in the world. At present alpine tundra exists on mountain tops on all continents, above 15,000 or 16,000 feet in the tropics, down to about 800 feet on mountains close to the Arctic Circle. It is continuous between the mountains in places like the Tibetan Plateau, but in many cases, exists as small isolated patches on each of several nearby mountains. The predictions are shocking: 40-48% reduction in the Alps, Pyrenees, and Scandes of Europe, 35-67% on the Tibetan Plateau, over less than the next 100 years, even at the lowest rate of warming (2 o F/1o C).
Climate variation has shifted the alpine tundra in the past. The last interglacial (period between the advances of glaciers), more than 80,000 years ago, eliminated alpine tundra in many places. When conditions turned cold as the Wisconsin Glaciation developed, about 75,000 years ago, tundra returned to many mountain tops, to shrink again as the glaciers melted, ultimately producing in the pattern of our lifetime. Global warming will first squeeze the alpine habitats and then eliminate them. But it is a big world and when there is no alpine tundra left in Arizona or New Mexico, there will probably still be some in Montana and Alberta.

The process has begun. Study of Rocky Mountain plants show that warming has led them to start growing almost two weeks earlier than 30 years ago. A study comparing average monthly temperatures, that used a common definition of tundra as an ecosystem that requires the average temperature of the warmest month to be colder than 10 o C (50 o F), found a 73% reduction in alpine tundra in the western United States between the beginning and end of the 20th century (see Fig. 2).
Simple explanations suggest montane organisms moving up as their preferred temperatures retreat ever higher. For example, based on warmer days and nights, seeds of plants that fall into areas where previously, because of cool temperatures, they grew too slowly to mature their own seeds, will now mature seeds and survive at that higher elevation. If those plants are trees, then tree line moves higher and the alpine tundra, defined as being above tree line (an alternate definition to the temperature one), shrinks. When it shrinks enough, plants and animals go extinct from that mountain.
My simple explanation is too simple, as lots of detailed studies of the alpine tundra from around the world are demonstrating. Practically no two plant or animal species are limited in exactly the same way (which allows them to coexist). So some will respond to growing season length but others to winter temperature, or to snow depth, or to predators, or parasites whose ranges change with warming. A lot of things are changing, and there are a lot of different responses to each of those changes. Nevertheless, some species will not be able to survive the warmer, less snowy conditions and will go extinct, first locally and then totally. The projections up to the year 2100 are pretty bad and fall within the lifetimes of people now alive. But warming is likely to continue into the 2100s, not a pleasant prospect. 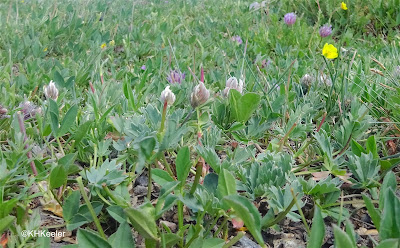 We should all do what we can to limit release of the greenhouse gases that drive this, such as getting our energy from sources that don't put carbon into the atmosphere, planting long-lived plants that store carbon, and supporting incentives that make reduced carbon production attractive to everyone.

For most people in the lower 48 states, the tundra is far away. I recommend you go see the alpine tundra sooner rather than later. It can still be found in the mountains of New York and New England, at high elevations in Arizona and New Mexico and in the Sierras, Cascades and Rocky Mountains. Take lots of pictures. Plan to go back to that spot in 5 or 10 years and see the response to global warming for yourself.

There are many things that humans have mitigated, so that the dreadful outcomes predicted never occurred. Successes include cleaning up Lake Washington by Seattle, saving condors, and reducing air pollution over Los Angeles and Denver. But global warming engages the earth as a single system, and that system is huge so it changes only very slowly. The carbon dioxide and other pollutants we have put into the atmosphere that are causing global warming will eventually be cleared out, but the process will take at least 500 years, too long for any of us to appreciate. Meanwhile, it will get worse before it gets better, threatening the high alpine plants and animals and much more. We can't stop it in our lifetimes. What we can do is start the reversal and, especially, reduce how bad it gets.

Just as I can tell you of ecological successes, I can take the ecologist-as-observer role and praise the mountain forests that will replace tundra on mountain tops. Those are wonderful forests. But the tiny plants of the tundra are beautiful, marvelous in their adaptations to the coldest environment on earth, and already rarer than mountain forests. See the tundra, cherish its plants and animals, and help find ways to protect it.

Posted by A Wandering Botanist at 1:35 PM