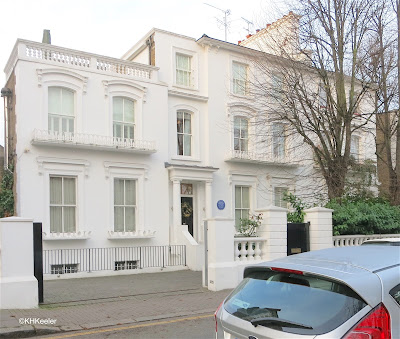 The language we choose is so evocative. Robert Fortune stole tea from China. He broke the Chinese monopoly on tea. He spied in China, disguised as a Chinese. Despite great difficulties, he collected and successfully brought many important Chinese plants to England. All true.

I'm conscious of the changing politics. When I first went to China in 2007, they were trading partners of the United States and developing capitalism despite the communist government. Today competition and hostility between West and East is very evident.

China's history and culture are very different from my Euro-American education and life, so I was fascinated to be in a place where I didn't even know the ordinary children's stories (How Kua Fu raced the sun link ), let alone history (What was the battle of Red Cliffs? (link)). I read and learned.

Into this came Robert Fortune.

Tea, the leaves of Camellia sinensis, in the tea family, Theaceae, is an ordinary beverage today, but it was unknown in Europe before 1500. Tea is native to southern China and has been cultivated there for millennia. When introduced to European markets, it became a hit. Demand rose and rose.

England in particular couldn't get enough tea, but the Chinese made them pay for it in silver. In the 18th century, the British Empire fought almost continuous wars, and very much begrudged the silver going to China. Their clever solution was to grow tea themselves, in newly-conquered India. The problem was that China refused to share tea plants or the knowledge to grow and prepare tea. The Chinese Empire restricted foreign ships to a handful of ports and did not permit foreigners to travel inland of them. Unimpressed by Chinese laws, the British recruited plant hunters to go into the Chinese interior.

Robert Fortune, a Scotsman, was hired to bring back desirable plants, especially tea. He made three extended trips to China which he described in a series of popular books (links below). He knew he was forbidden interior China but went anyway, shaving his head Chinese-style, faking the long braid (the queue), wearing the robes of a mandarin (government official), and pretending his odd accent was because he was from "a very distant province."

England had several important misconceptions about tea, in particular that black tea and green tea were different plants (they are produced by different drying methods), so getting the story straight was not simple. Furthermore, tea was highly processed, with many complex steps between the leaf on the tree and the drink. Fortune made important progress. He also lured several trained tea-growers into going to India, crucial to successfully growing the plants and processing the tea leaves.

Bringing the live plants to India is the action for which he is most celebrated. To get to India, tea seeds or plants needed to be transported from the tea-growing regions of China to a port, a matter of weeks if not months. Of course the ship would not be ready to sail, so they would wait at the port. Ships to India had to sail with the prevailing winds, north and west in summer, south and east in winter, consequently the wait could be long. There were also likely to be long stops at ports before India. And, finally, the potential tea growing region of India was at the base of the Himalayas, a long way from an Indian port. It could easily take a year and a half for the tea plants from China to reach India.

If Fortune started with tea seedlings, he had tiny plants at risk on the ship. A sailing ship is a terrible place for plants. In the hold it is too dark. On the deck ships are very hot, very dry, and splashed by salt water. Sending seeds did not help; tea seeds have no dormancy so they germinated during the voyage. Fortune took on these challenges and succeeded. Many of his tea plants died. But not all. In particular, he used Wardian cases, glass boxes developed by Nathan Ward (1791-1868). Sealed behind glass, Wardian cases keep the water in so that, untended, a wide variety of plants will live for months or years.  Opening the cases let in fungi and often plants in those cases died. Fortune sent tea seeds, which, although they germinated en route, grew and survived in the Wardian cases. Fortune learned a lot about transporting plants, which was of great use to his contemporaries.

A tea industry was begun in India from the plants Fortune sent, though, ironically, British colonists in India had not been idle; they found Camellia sinensis variety assamica, a native of the Himalayas, and had begun making tea from it, the origins of Darjeeling tea.

That story reflects the British telling of the history. I don't have a Chinese biography of Fortune, but surely it would portray him as a callous, arrogant westerner who did not respect the Chinese traditions and flaunted the law. He disguised himself and lied to the Chinese he encountered in order to steal trade secrets, with the explicit goal of undermining the market of an important Chinese industry. It is one of those cases where if the role was reversed--imagine he successfully snuck into England to steal rose plants forbidden to the Chinese by the King of England and destroyed an international market for English roses--he'd be portrayed as a thief, spy, and worse.

Today's industrial espionage is mainly about high technology, not how to grow a finicky tropical mountain tree, but the issues remain. Nationalistic narratives deserve to be reversed, to determine if the other side would tell anything like the same story. It is easy to miss the cues, however.

In London, you can visit Chelsea Physic Garden where, between trips to Asia, Fortune was briefly an enthusiastic curator. It is a lovely place full of useful plants, some impressive for England, like citrus and banana. And from there you can walk a few blocks to the house at 9 Gilstone Road where his family lived during his third trip to Asia and to which Fortune retired. Both of these take pride in Fortune. He was certainly brave, intrepid, and intelligent. Go from there to a tea house and sip tea, this time thinking of the ancient Chinese tea traditions and that the British stole tea.

In southern China, you can visit tea plantations and see both the plants and the preparation methods. Naturally there are teas to sample.
Of course, I'm writing this in the United States in September 2020, and I can't go to any of those places. But borders will reopen. Stopping at places important in the history of tea adds to any journey. Enjoy.
I am in no way interested in Immortality. I only yearn for the taste of tea. Lu Tong (China, 790-835)
The mere chink of cups and saucers tunes the mind to happy repose. George Gissing (England 1857-1903)

Chelsea Physic Garden was a great place for a botanical visitor. This was their sign: 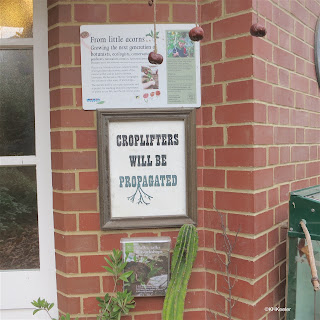 And, as a botanist, I love that the Chinese often identify their big trees, in English and Latin. This, for example, was on a tree in a small town street. 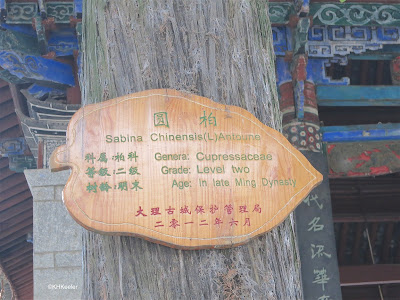 Fisher, A. 2008. Tea Wisdom. Inspirational Quotes and Quips about the World's Most Celebrated Beverage. Tuttle Publishing, Tokyo, Japan.
Fortune, R. 1847. Three Years' Wandering in the Northern Provinces of China. online at Guteberg.org
link Fortune's books have been digitized and are online, see links in Wikipedia biography of Fortune.(link) He had some hair-raising adventures, the books are good reading.
Maylack, J. 2017. How a glass terrarium changed the world. The Atlantic. link Accessed 9/3/2020.
Minter, S. 2008. The Apothecaries' Garden. The History Press, Stroud, Gloustershire, UK.
Rose, S. 2010. For All the Tea in China, How England Stole the World's Favorite Drink and Changed History. Penguin Books, New York.

Posted by A Wandering Botanist at 9:55 AM