Cattails, genus Typha (cattail family, Typhaceae) are found all across the world in wet areas. Wet areas have specialist plants, because most plants cannot grow in water or saturated soil, but people who cannot recognize a reed or an ash, recognize cattails. Partly that is because they are distinctive. The flower and seed head looking like the stem was pushed up through it--or like a hotdog--is unusual and memorable. But also, they are common and numerous. Cattails often dominate large areas of wetlands. And, compared to many herbaceous plants, they are tall and broad.

Where do I start for cattails?  Did you know cattails are edible? Most people who gather wild plants know that, but many others don't. First, the pollen has been used as flour.  It is produced along the top spine of the flowering stalk--where it looks like something fell off in the photo below--and, during its brief period of availability, is relatively easy to gather. Most recipes mix it with flour because by itself it doesn't cling as we expect flour to do. 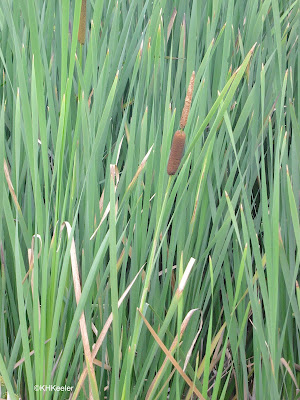 The new flowering shoots can be gathered, roasted, and eaten like corn on the cob.

Actually, the whole plant is edible and people collect it various ways. New leaf shoots, "laterals," especially while still down at the base, are tasty. The interior leaf bases--throw away the outer leaves contaminated by standing water--are delicious. The rhizomes, underground stems, can be collected any season although they are richer at the end of the growing season; they are excellent food.

It is a challenge to gather cattails, however, since about one step into the clump your feet sink into stinking mud.  Be prepared.  It is also hard to want to eat something that came out of foul water. Plan for that too.  But if we had to forage for food, this would be a staple of our diets, because it is abundant and large and offers food year round. It is also hard to confuse cattails with anything else, but, when not flowering, there are some a few other aquatics with broad flat leaves. What other species you might find depends on where you are. Unfortunately, a few, like native irises, are pretty toxic, so be sure it is cattail. For more information on eating cattails, see references below or google it (also try other common names--see below--for British or Australian recipes.) 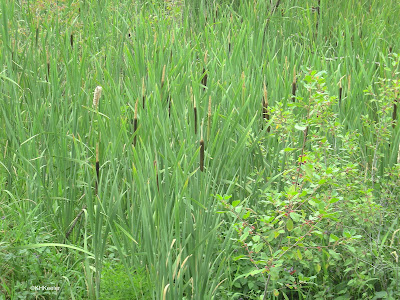 The inaccessibility of cattail marshes makes them important to all sorts of songbirds. Red-winged blackbirds and marsh wrens, for example, nest in marshes, especially cattail marshes. Out a few yards  into the marsh, they are hard for terrestrial predators such as cats and foxes to reach. Small fish hide among the cattails while growing into large fish. Many insects lay their eggs in the slow moving water of cattail marshes, develop as larvae there. and emerge to be air and land-dwelling adults. Some of those are mosquitos, but all of them are food for fish, birds, larger insects, mammals...the whole food chain.

Cattails reduce erosion as they buffer moderate waves and slow the flow of streams. Growing, they remove pollutants from the water. This is a caution, if you are foraging; gather from unpolluted waters. From a conservation standpoint it is a good thing, in fact cattails can be harvested for fuel from biomass, clearing the pollutants out of the water system.  By slowing water and collecting silt, they contribute to the filling of ponds and lakes, a natural process but problematic to many modern uses of ponds and lakes.

These are wind pollinated plants, with the male flowers above the female flowers on the flowering stalk. They grow fast and spread across wetlands, tolerating conditions from water several feet deep to barely wet soil. The seeds are light, with long slender hairs to help them move, and are easily transported by wind and water.

Their success in wetlands around the world is remarkable and has led to different common names in different places. Cattail is the usual name in the United States and Canada. In England they are often call reed mace, reed as in the reeds of wetlands but mace for the shape of the flowerstalk, reminiscent of the medieval weapon, mace. I remember reading a section about reedmace in a British plant book, and being very surprised when it turned out to be cattails the authors were describing. The English also say bulrush, which for me, as an American, is a sedge (family Cyperaceae, Cyperus or Carex), for example the one in the Bible story of Moses is Cyperus papyrus, also called papyrus (link).  Australians call it bulrush (or bullrush) too, but also cumbungi, and conga. Because many wetland plants are hard to tell apart, the sedges for example, when you hear a name you don't know, its easy to zone out, not thinking to look carefully and discover, "oh, they mean a cattail!"

There are 10-13 species of cattail worldwide, with three found across North America. Often two or more species share a marsh, one in deeper or faster water than the other. Land plants tend to have regional distributions because climate and soils change over distance. That is true to some degree for aquatics like cattails, but in many regards, lakes from very different parts of a continent provide similar growing conditions, and the water speed and depth are more important to them than rainfall patterns. That explains the very large range of the broadleaf cattail, Typha latifolia which is native to every state in the continental United States and all of Canadian except Nunavik and Laborator.  My meme would have broadleaf cattail saying, "It is freshwater? Ooh, there must be a place for me!"

That quote describes broadleaf cattail but doesn't get at the modern situation. The other cattail found all across the United States is the narrow-leaf cattail, Typha angustifolia. Over the last hundred years it has spread from the East Coast to the West Coast. A study in 1987 (see references) suggested it came from Europe with early settlers. More recent genetic studies have supported that theory. Consequently, although the USDA  maps indicate that T. angustifolia is native to Canada, the data point to it coming from Europe in the 1700s. Since then it has been remarkably successful, expanding and expanding its range. Broadleaf cattail prefers stable undisturbed wetlands while narrow-leaf cattail is more tolerant of perturbations, including from humans, so it is taking over from broadleaf cattail in many places and is increasingly considered undesirably invasive. The two species hybridize and the hybrid, called the hybrid cattail, Typha x glauca, is even more aggressive than narrow-leaf cattail.

The southern cattail, Typha domingensis, is found across the southern half of United States and is considered native. Another cattail, Typha gracilis, occurs in some reports as a native replaced by narrow-leaf cattail, but also as another name for narrow-leaf cattail. I can find no satisfying report of it. People working to classify and understand cattails point out that many, many collected specimens are misidentified, so much of the reporting is flawed and must be rechecked. Looking at the Flora of Colorado, here, broadleaf cattail has broader flower/seed heads and broader leaves, and no mucilage, but since, there's a hybrid, confusion is easy.

Native Americans made extensive use of cattails. I can't find cattails in European medicinal plant works, but all across North America, Native Americans used them medically, for skin problems, as a disinfectant, to dissolve kidney stones, for burns. Their use of the plant as food included all the uses above plus eating the tiny seeds various ways. The wooly fiber around the seeds was used to stuff mattresses, pack into wounds, and prevent infants from chafing. The leaves were woven into mats for the outside of wigwams--they're wonderfully waterproof--and into baskets. The roots could be mashed to caulk a canoe. The list is one of the longest entries in Moerman's Native American Ethnobotany (see it online) and the more impressive because tribes from the eastern forests (Algonquin, Iroquois) to the southwest deserts (Apache, Ramah Navajo) reported numerous uses of cattails.
English superstition says it is bad luck to bring cattails into the house. I don't know about bad luck, but my parents, just after World War II, tried to use cattails to stuff a pillow and regretted it; the fluff floated about the house for days.

Most of the plants I write about are invisible now, in winter. But cattails can still be spotted, perhaps more easily while other things are not green. Check out the seed heads, maybe even dig up a rhizome... Given how invasive narrow-leaf cattails are, using them would reduce their numbers. It really speaks to our disconnect from the natural world that we think of cattails mainly as interfering with recreational boating, and not for all their uses.

Posted by A Wandering Botanist at 10:19 AM