Colorado blue spruce (Picea pungens, pine family Pinaceae) is native to the central and southern Rocky Mountains, in Idaho and Wyoming south to New Mexico and Arizona, from high elevations (USDA Zone 2) down to Zone 7 (lowest winter temperature, freezing). It is endemic to the United States. and more specifically, the Rocky Mountains. A beautiful tree with bluish foliage, it has been widely planted as an ornamental around the world.

I think we say Colorado in its name because that's where the first one was found, though it is also the center of the range of the species. The trees can be distinctly blue, but some are a rich green. Common names include Colorado spruce, blue spruce, green spruce, Colorado green spruce, and white spruce. There's another white spruce, Picea glauca, but all the other common names refer back to the same tree and no other.
In the scientific name, Picea pungens, the  name Picea was based on the Latin word pix, pitch, tar, or resin, because pitch is found in the bark. There are about 39 species of Picea, found all across cool areas of the Northern Hemisphere. The species epithet, pungens, means sharp-pointed, referring to the needles, properly called needle-like leaves.

In nature, Colorado blue spruces are often 75 feet high, and have reached 126 feet tall with a trunk 60 inches across (at 4.5' from the ground, the forester's dbh, diameter breast height). The literature reports that planted trees rarely get larger than 30-50 feet. I wonder about that. The oldest known Colorado blue spruce was 600 years old when it died. Experts estimate the trees could live to be 800. The species was discovered for western science by physician and botanist C. C. Parry in 1861 on Pike's Peak, and reported in 1862. Any planted blue spruce is younger than 159 years. So couldn't they grow larger for many more years?

My backyard is dominated by a towering Colorado blue spruce (below). I believe the builder planted it in 1973. Today it is probably 50' tall. It continues to get larger. I built a flagstone path through my flowerbeds about 10 years ago. Since then the spruce has expanded so that several of the flowerbeds are under it, and it is starting to send branches over my path. Why I thought it was through spreading I have no idea, but it certainly wasn't (isn't). 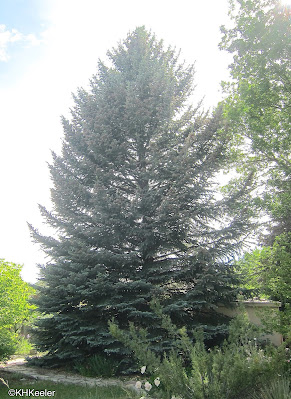 Colorado blue spruces start reproducing (producing cones) at about 20 years and continue for at least the next 100 years.  Birds and small mammals eat the seeds.

The trees provide important winter cover for animals, from small birds to elk and deer. Elk and deer will eat the leaves, but only in a limited way, apparently disliking something about them (the pitch?). The trees grow big and tall, but the wood is brittle and weak. Add to that that the trees are not particularly abundant, and you see why it is not much used for lumber. Indeed, the Forest Service publications suggest Colorado blue spruce's best use is as a standing tree to protect wildlife. Nice, eh? The tree is most useful when left to grow and be beautiful.

The growing conditions for Colorado blue spruces seem contradictory. They grow on mountain tops that get very cold, but the species range doesn't go into Canada, suggesting they don't do well in cold winters. Its natural stands are described as being in moist areas and yet it is the most drought-tolerant spruce and can endure periods of severe drought. It is described as both an early colonizer of disturbed sites and the forest dominant (climax species) taking over undisturbed sites from other trees. I can't sort this out from reading the literature. It all appears true. Certainly Colorado blue spruce prospers when planted, from southern Canada to Virginia, yet its natural distribution was limited to the central and southern Rockies and tended to be spotty there. What might link those observations? Perhaps seedlings are very sensitive but established plants are tough, or we're seeing odd patterns left by forest fires (it is easily killed by a forest fire) or because of some so-far-undefined soil requirement, or...there are many possibilities.

The beauty and symmetry of the tree has made them popular ornamentals, so you can find them all over the world. They have been embraced as Christmas trees. The U.S. National Christmas tree is a 30-foot Colorado blue spruce from Palmyra, PA (about it)  Colorado blue spruce is the state tree of Colorado. This popularity represents success in the human-dominated world of today; the trees have a much-expanded population and worldwide distribution because humans like them, rather than being endangered because humans dislike or ignore them. 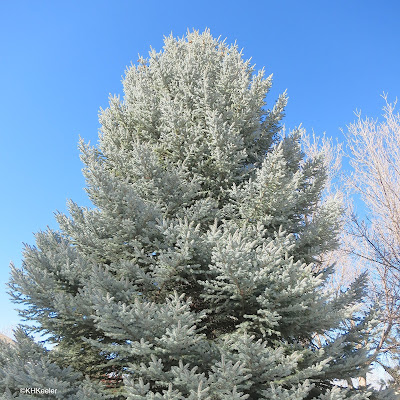 You can read that is the state tree of Utah, but that is no longer true. In 2014, Utah replaced it with the Utah quaking aspen as their state tree (world's largest tree, an aspen, is in Utah link) announcement.
It is a beautiful tree. I think mine is a bird apartment building, with finches, chickadees, and jays, at least, nesting and sheltering there. But, if you plant one, give it plenty of space. It is described as slow growing (4-5 inches a year in a nursery). Mine, at an estimated age of 47, keeps spreading and so, surely, is getting taller too. If you can imagine my neighborhood lasting another 500 years, the spruce could still be here, and will likely have taken over the surrounding flower beds. Just doing its spruce-tree thing, you know. The birds will love it.
Comments and corrections welcome.

Posted by A Wandering Botanist at 2:08 PM