Cranberries (usually Vaccinum macrocarpon, heath family, Ericaceae) are a major crop. The tart red berries are usually made into cranberry sauce, served on or with meat, not used as a fresh fruit or even a jam. They are a common and handsome red fruit drink, which is usually sweetened or mixed with juices like apple and grape because a juice that is pure squeezed cranberries is so tart only a few people will drink it. Cranberries are the fruits of small, sometimes viney shrubs that grow in cool boggy places.
Cranberries are famously an American fruit, shared by local Native Americans with the Pilgrims in New England. The American story of cranberries spread from there.
Cranberries were well-known to the tribes of the East Coast. My secondary sources say the Lenni-Lenape of New Jersey called them pakim, bitter fruit, the Chippewa said a'ni-bimin, and the Narragansetts sasemineash and the Wampanoag sassamenesh. You can look that up on in Native American Dictionary (link) but I don't have the skills to read those languages. There will be another set of names used by tribes across the northern U.S. and Canada to the Pacific Northwest. Our name, cranberry, is based on none of these. Settlers reportedly thought the flowers looked like cranes, bird head with bill, and crane berry became cranberry. The Oxford English Dictionary, however, says the name cranberry for the fruit is from a Low German word kranebere, crane berry, and its variants like kronesbere. Although colonists in New England ate lots of cranberries, and soon sent them on ships to England (packed dry they ship very well), the Low German name probably came from a colony with more mixed settlers than Massachusetts, perhaps New York. Cranberries grow abundantly in New Jersey's Pine Barrens and, today, New Jersey is a major producer of cranberries.
This gives the impression that cranberries are unique to North America. We have several species and the plant commercially sold as cranberries, Vaccinium macrocarpon, is an American native. But the whole picture is more complex. The genus Vaccinium includes about 450 species, most of them with blue fruits and called blueberries (yes, our common blueberry), bilberries, huckleberries, and whortleberries. A few, five of the 36 in the continental United States, have red fruits and are called cranberries. (Note that only 36 of the world's 450 Vaccinium species are North American). There are many red-fruited Vaccinium species around the world. Two from Europe were well-known where they grew. One is the famous lingonberry of Scandinavian cuisine (V. vitis-idaea) which is found all around the world (North America, Eurasia, Japan,  circumboreal). It is also called the mountain cranberry, bog berry, and moss berry, among other things, depending on where you are. Another is the small cranberry, cowberry, or bog cranberry V. oxycoccos, also found all around the northern Northern Hemsphere. In Europe, their range is in the north--northern England and Scotland, across Scandinavia and Russia, south only to Germany and the mountains of France. While English names included bog berries, moss berries or red whortleberries, the name crane berry, some version of kranebere, was widespread in German, and in Scandinavia the usual name was tranbär (Swedish) and tranebær (Danish), both translating as "crane berry." The name cranberry seems to have come from Europe, been anglicized, and gone back to Europe, because today Europeans call Vaccinium oxycoccos cranberry or European cranberry. North Americans sent large, American cranberries (V. macrocarpon) on ships to Europe in the 18th century to prevent scurvy and, starting about 1850, as a food export. The American cranberry is currently being raised commercially in northern Europe and Russia and has escaped in some places. Its fruits are bigger than other cranberry species, so more useful commercially. 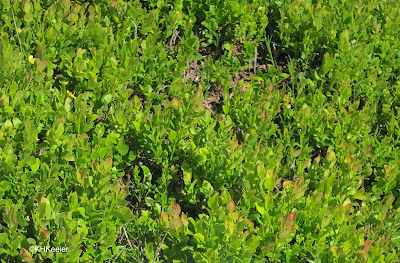 Cranberries are so tart that although people all over the world have eaten them for millennia, most have mixed them with something else, whether it was as cranberry or lingonberry sauce on meat, or sweetened with maple syrup, or as dried fruit in pemmican. The availabilty of cheap sugar, beginning in the early 17th century, made cranberry tarts and jellies more popular. Cranberries are rich in vitamin C and minerals. They are very astringent--Native Americans used them to stop bleeding--and antioxidant. They have a reputation for treating urinary tract infections but my quick look at web resources pulled up mixed messages. The medical sites generally recommend cranberries as a healthy addition to any diet, just watch the amount of sugar you use to cut reduce the tartness.
Hawaii has three species of native cranberry, ohelo berries--quite a trick crossing all that ocean!--but this widespread plant group is mainly Northern Hemisphere, with only two species in South America and did not make it to Australia before European settlement.
Birds and fruit-eating mammals (bears!) like cranberries. The leaves are browsed by wildlife to some degree, but are not a favorite.
Finding cranberries--of whatever species--on a hike is always a delight, but one wild berry is pretty much all I want to eat raw.  But they are lovely in muffins or cereal or with turkey.
References
Blakely, J. 2017. Native Fruit: Cranberry for all Seasons. Unbound. Smithsonian Libraries and Archives. link  accessed 12/16/2020/
"cranberry, n.". OED (Oxford English Dictionary) Online. Oxford University Press. Accessed December 16, 2020.
Harker, J., and D. Perry. History of the American cranberry. Cranberrycreations.com link  Accessed 16, Dec. 2020.
Moerman, D. E. 1999. Native American Ethnobotany. Timber Press, Portland, OR. link
New Jersey Digital Highway. 2020. The Cranberry Industry accessed 12/18/2020/
US Forest Service. Vaccinium oxycoccos. link
US Forest Service. Vaccinium vitis-idaea link

Posted by A Wandering Botanist at 2:15 PM