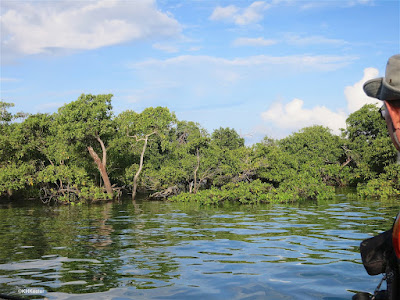 Early in my career as an ecologist, I had the opportunity to explore a stand of mangroves. I haven't wanted to do it again. 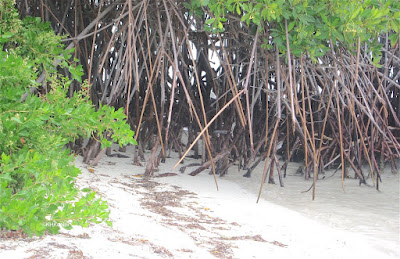 Mangroves are shrubs or small trees, members of about 16 different plant families (Acanthaceae, Combretaceae and more) but especially the Rhizophoraceae (called the mangrove family). The key is that they are tolerant of life in the tropical tidal zone: daily flooding by salt water, then exposure to the air. Both flood tolerance and salt water tolerance are uncommon traits in higher plants. Mangroves are diverse but survive in the same place because they have evolved adaptations for surviving lack of oxygen, salt and the unstable ground. Underwater, lack of oxygen kills roots, so mangroves have mechanisms to release it, in some species throug pneumatophores ("breathing tubes") that stick out of the water and let oxygen escape. If a liquid or tissue is less salty than the ocean, dissolved salt will move into it via diffusion; mangroves either have leaves, stems and roots so thick the salt cannot get in, or they actively excrete salt, pumping it onto leaf surfaces. A tidal zone is a tough area, the tide pushing hard in toward shore, and then later pulling out to sea, in each case moving sand away from or over plants. Mangroves have lots of roots and shoots going below the sand, spreading, to stabilize them, making the thicket effect you see in the photos, so they stay steady despite the tide sweeping in and out. Their seeds fall into salt water and can survive that unfavorable environment to lodge somewhere down the coast and successfully germinate. Each of these characteristics is produced by marvelous traits for surviving conditions that kill most plants, often slightly different between species but solving the same problems. 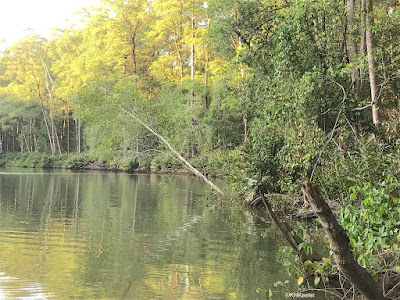 Mangrove is also a general term for the plant community where mangroves live, a flooded coastline forest. The spreading roots and stems that anchor mangroves against the tide create a protected place where lots of fish spawn, birds nest, and all sort of other species hang out. Many fisheries depend on them. For humans, they buffer the land against storms and tsunamis, reducing impact. A swamp is a flooded forest, so saying mangrove swamp is appropriate, though there are many differences from a fresh water swamp. You can also say mangrove forest. Both terms distinguish the plants, called mangroves, from the community they live in. 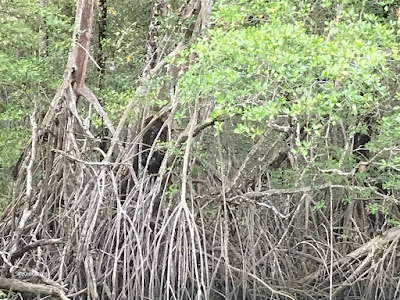 I knew when I explored the mangrove swamp that it was an ecologically important place and that I would likely find cool animals and plants there. HOWEVER, I had no idea what it would be like to walk there. The tree roots reached into the ground, turning at every possible level. I went over the first and under the second and around the third. My inclination was to walk on the sand--I had on worn tennis shoes--but I sank in up to my knees. Next I tried climbing across the branches a little above the sand. Almost immediately, I put my hand on a hermit crab, also using the tree as a road. Hermit crabs don't bite, but the next thing on a branch might. Certainly some of the roots swarmed with ants. Eww! I didn't want to climb amid ants. All kinds of insects swarmed about my head. Under the canopy, in watery sand, the air was very close and humid. It was not long before discomfort overwhelmed my curiousity and I retreated. For decades, I have been satisfied to describe the ecological benefits of mangroves without walking in them.

The characteristics that I didn't like about the mangrove swamp are what make them so important to the coasts. Impentrable forests mean animals from very tiny fish to monkeys can hide from or dodge their predators. Nesting birds find the dense insects easy prey to feed their nestlings. The soft sand and tangle of branches trap an incoming storm surge and blunt its impact. Though they seem a barrier to many people, since they are so difficult to enter or cross, they make a major contribution to animal abundance, and human safety, in the surrounding area.

Last year, I took a tour of Costa Rica that included a mangrove tour. We went by boat, where the water was deep enough. You can't get very far into the mangroves by boat but we spotted birds, monkeys, caimans, frogs, turtles, lots of interesting animals. And mysterious tropical plants, out of reach and hard to identify. As fascinating as their reputation suggested. 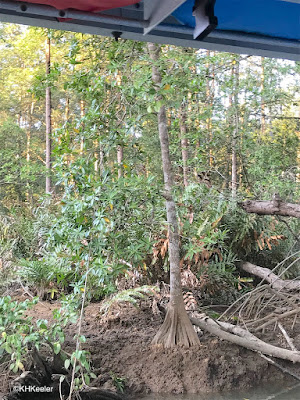 Mangrove forest ecosystems are essential to many important organisms and to coastal protection but, I think, places that people should simply enjoy from the margins. Try hiking one yourself, if you don't believe me. 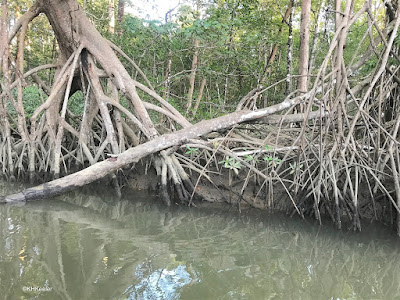