Early in the spring on the Rocky Mountain Front Range, star-lilies (Leucocrinum montanum) bloom. They're neat little plants, very visible for a week or two, so early that your hike might be in sleet. Although common in some areas and easy to recognize, star-lilies are pretty mysterious.

All my Colorado sources call them sand-lilies, the USDA and others say star-lilies. They grow in sand, but also in forests, on hillsides, and in grasslands, and not in the Nebraska Sandhills or Colorado's sand dunes. Star-lily seems less misleading. Both names are obvious enough that there are other plants called star-lily (Hypoxis, Toxicoscordion) or sand-lily (Pancratium), though those have more frequently-used common names.

You can write it many ways. Some sources write star-lily, others starlily, still others star lily. The plant is not actually a lily, so making it a single word makes that clearer. However, starlily offends spellcheck but star-lily does not, so I'll go with star-lily. 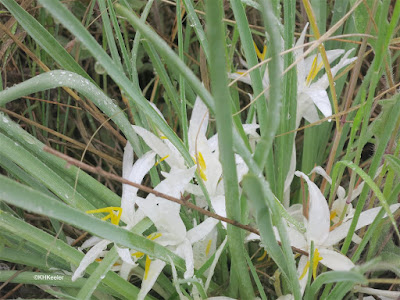 Why is it mysterious? I suppose because it is practically unstudied.

But consider these characteristics:

Star-lily blooms early in the spring (I've seen it April 15 to May 26 at 5000' in the Rockies) and then becomes virtually invisible since the 4-6" long, narrow leaves look a lot like grass leaves. If it gets dry, the leaves wither, leaving no aboveground plant at all.

The seeds develop underground. The flower is just above ground level, not on a stem, and has a long (2.5 inch) tube leading into the ground to the ovary. There is no standing shoot with the developing seeds to reveal its location.

What pollinates it? A review paper from 1983 lists it as hawkmoth pollinated but gave no reference. Hawkmoths prefer to fly in twilight or at night. The white flower is good for spotting in poor light and it has a sweet smell, both characteristics of night-blooming plants. The flower shape is good for hawkmoths to hover over. But it is among the first group of plants to flower each spring; are hawkmoths flying that early? The white-lined hawkmoth, Hyles lineata (Sphingidae) is the only insect listed eating star-lily, but the white-lined hawkmoth is extremely broad in its host range; its caterpillars eat dozens of different plants. General websites say white-lined hawkmoth adults emerge in May, so perhaps they are available to pollinate star-lilies. Other butterflies were flying in May when I saw open star-lily flowers, so, if it is hawkmoth pollinated, perhaps there are other hawkmoths available as well (the host plants of larval moths and food plants of their adults are not usually the same). A post from Oregon reports star-lilies, as early spring nectar-flowers, are attractive to bees. Whether those bees pollinate it is not clear. 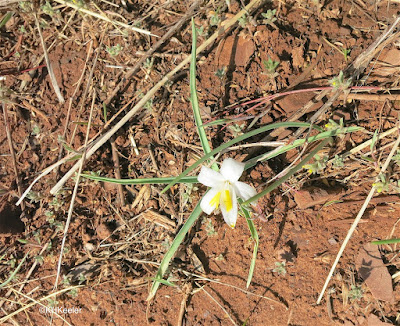 The seeds develop below ground. Then how does it get around? A paper from 1887 says that, the next year, the new buds push the seeds out and, caught in the dead leaves of last year, they are blown to new locations. Others since then have suggested the seeds just roll out onto the ground the second spring. Another theory is that they are dispersed by ants. That is possible but seems unlikely. Harvester ants are not good dispersers because they take seeds deep into their nest to rot and be fed to  the fungi they feed their larvae. Other ants are not interested in seeds because they're carnivores. Plants like violets that are adapted for ant-dispersal provide some sort of reward for the ants, like an edible oil drop attached to the seed (eliasome). That has not been reported for star-lilies.

Until somebody takes the time to look, we won't know these basic things about star-lilies.

Botanially, star-lilies are cool for having only one species. In the jargon, the genus Leucocrinum is monotypic. So star-lilies are not much like any other plants. I have always thought plants that are the only species in the genus neat; individualistic, unique. But why don't they have a bunch of closely related species? Some monotypic species are that way because their relatives have all died out. That does not seem to be the case for star-lily. What family it goes into has been a problem--after all, its different--but lately DNA has put it into the asparagus family Asparagaceae, not the lilies Liliaceae, and within the asparagus family, closer to Agave and Yucca than anything else. Agave and Yucca have a lot of species and are not old groups. So why is star-lily just one species across all of western North America? I have no idea, but it is. 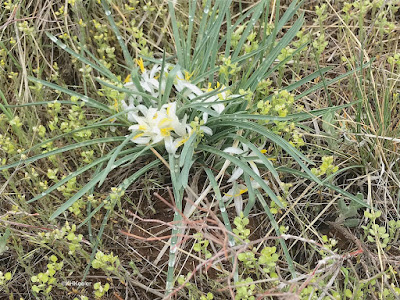 Which means when I see "common star-lily" as its English name, I shake my head. There's only one star-lily. It is The star-lily, there is no other.

Leucocrinum translates from the Latin as "white" leuco and "lily" crinum. As you might expect, montanum means "mountain."

They are found in suitable habitats across western North America to at most 8,000' elevation, and in some places are quite common and visible, but then hard to find when no longer in flower.

Native Americans sometimes pounded the roots (fibrous, not a bulb) for a poultice for bruises. The Crow tribe reported eating the leaves of something identified as star-lily, but, in working on this post, I found a variety of small lily-like flowers in the west confused with it (a death camas (Toxicoscordion), a soap root (Chlorogalum)), and that both pronghorns and prairie dogs were observed to taste, but not eat, star-lilies. Anderson writing in 1889, reported that "Leucocrinum montanum is said to be very fatal to sheep after the fruit has developed." (p.181). On the other hand, Plants for the Future website says it is edible but not very good, rating it 1 out of 5 (link). Since there is nothing recent and definitive, I wouldn't eat it.

All of this uncertainty--pollination, dispersal, toxicity--had me visualizing star-lily's ancestor growing  somewhere in North America 20 million years ago. Its relatives had flower stalks--think Agave and Yucca. Why did star-lily retreat into the ground? To avoid adverse conditions? Maybe, but it doesn't grow in deserts or on mountain tops. To avoid being eaten? Maybe. By doing that, its seeds are well-protected, but very hard to disperse. Not many plants have evolved below ground seeds, suggesting there are more problems than advantages to underground seeds. So that is another puzzle about star-lily.

They are very pretty plants and wildflower fanciers who see them would like to grow them in their gardens. I would. But they are not generally available to buy. The seeds are underground, not easy to collect. In 1903, Goetting dug a plant up and found that most seeds had holes in them, and the ones that were whole never germinated. Star-lilies remain wild, not cultivated.

If you live in the West and hike out early in the spring, watch for this mysterious plant.