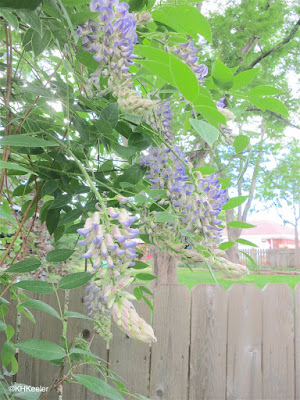 My first memory of wisteria is of my father digging out a big plant, shaped like a small tree that was growing at the end of the driveway of our new house in Ohio. He disliked the way it came up well into the lawn. I liked it for its beautiful, fragrant flowers. And that is a good summary of Asian wisterias in the United States.

The wisterias, the genus Wisteria, in the pea family, Fabaceae, are woody vines, with eight species worldwide. One species is native to the United States, American wisteria, Wisteria frutescens, and relatively rare in the wild. But it has been cultivated for 200 years, so appears in gardens. Across the world, wisteria has been a popular garden plant in China and Japan for millennia. Both Chinese wisteria, Wisteria sinensis, and Japanese wisteria, W. floribunda, were long ago introduced into the United States. They have naturalized here, to the point of appearing on invasive species lists in several states (Chinese wisteria, Japanese wisteria ).

Finding closely related plants on the U.S. east coast and on the east coast of Asia seems strange but is  surprisingly common (magnolias and camellias and 118 others (link)). One hundred million years ago the supercontinent of Laurasia had continuous mild temperate ecosystems from what is now New York and Atlanta to what is now Beijing and Shanghai. Beginning some 60 million years ago, the supercontinent broke apart as the Atlantic Ocean formed, separating the plants into American and Asian groups. Some decendants remain, now as different species on the two continents, but recognizeably closely related. (continent map; plants )
The botanist who named wisteria, Thomas Nuttall (biography), said he named it for Caspar Wistar (1761-1818), a prominent Philadelphia physician and friend to presidents (biography Wistar Institute is also named for him link.) The change from Wistar to wisteria has caused two centuries of speculation. An alternative theory is that it was named for Charles Wister, a Pennsylvania naturalist of a distinguished family. Most commentators today think it does commemorate Caspar Wistar since Nuttall said so (but see alternate stories in Wikipedia and EattheWeeds). The plant was spelled Wisteria in the official, formal description, so Wisteria is the correct spelling, whatever Nuttall's thoughts were.

The specific epithet for American wisteria, fructescens means shrubby or woody; for Japanese wisteria, floribunda, means "with abundant flowers"; sinensis of Chinese wisteria means "of China."
All three are big woody vines with many flowers, the flowers lavender to purple in wild forms, with cultivated varieties from white to pink. American and Chinese wisteria twine counterclockwise, Japanese wisteria twines clockwise. (I have no idea why plants turn either clockwise or counterclockwise and why it would differ. The simple answer for wisterias is "genetics.").

Wisterias are climbing vines that in nature reach the tree tops. Big wisteria plants make a dramatic display when they flower in early summer. In Asia, it is common to provide a trellis for wisteria, so the flowers hang overhead, perfuming the air.

All parts of wisteria are toxic. Wisteria appears on some"most toxic" lists but it doesn't belong there. All parts of the plant contain the saponin wisterin, and lectin, a protein that binds to carbohydrates. In the stomach, these compounds make proteins and carbohydrates indigestible. Large indigestible materials in the stomach and intestine cause nausea and indigestion and lead to vomiting and diarrhea. In addition, people who have ingested wisteria may become dizzy or confused. Often the mouth burns upon eating wisteria; as always with plants, that is a signal not to eat any more! Small children can become sick after eating just one seed. The symptoms may last several days, the following fatigue may continue for more than a week. That all sounds pretty bad, but no fatalities are known. Only a handful of wisteria poisonings have ever required medical treatment in North America (I found only 1 record). Pets and farm animals show similar symptoms and, although there are alarmist statements of "deaths of dogs and small children" on the internet, I can find no such cases reported in the medical or veterinary literature (ASPCA for example link). The seeds are the most toxic and easily-eaten part. I could not find any comparison between the various wisteria species in terms of toxicity; most sources implicate any species of wisteria. Wisteria will upset your stomach but so far nobody has died from it, which does happen from eating other plants.

Toxicity usually means medicinal applications. The Chinese used stems, bark, roots, flowers, and seeds as medicines. Wisteria seeds were supposed to protect wine from spoiling and, when added to spoiled wine, restore it. They used wisteria as a diuretic and for "yin" heart conditions, despite recognizing it was mildly toxic.

Furthermore, the Chinese ate the flowers. Parboiled flowers were eaten fried and in cakes (tengluo bing, wisteria cake). Green Deane of the blog EattheWeeds wrote that the Japanese eat Japanese wisteria flowers blanched, the leaves boiled, and the seeds roasted. (China and Japan knew about each other's wisteria, but largely grew, and grow, their native species.) Deane states the flowers are edible, raw or cooked. 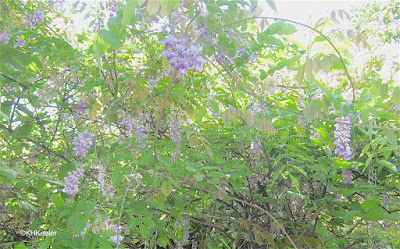 Poisonous but edible? Really? It is possible. First, toxins are not necessarily evenly distributed through a plant. Seeds often get the most, because those are the plant's potential children. Each seed must have nutrients to support the seedling, making it particularly nutritious to animals. Consequently many seeds are packed with protective chemicals. Flowers are often the least toxic. Flowers do not last very long and are frequently overproduced relative to the number of fruits the plant can support, so plants cut corners and put only a few expensive-to-produce toxins in the flowers. Secondly, rinsing and cooking remove or destroy many plant chemicals, reducing toxicity. Finally, the seriousness of poisoning from plants (and most toxins) depends on the dose. Wisteria cake has a lot of other ingredients and not even an ounce (20 grams) of wisteria flowers (recipe online link) .

Chinese wisteria has been an important garden plant in China since at least the Tang Dynasty (1,500 years ago.) The Chinese liked both the purple flowers and the wood, which twisted, became gnarled and "dragon-like".
Japanese wisteria also goes back at least 1,000 years in gardens. Today wisteria viewing follows plum blossoms viewing as the year progresss. There are very large plants that put on a brilliant show (link). The oldest wisteria of known age in Japan is over 145, (link) which demonstrates that wisteria plants can live a long time.

American wisteria was introduced to England in 1724 and, as propagation increased the supply, became a major English garden plant.

In the eastern United States, if you want to grow wisteria, buy a variety of native American wisteria (Wisteria fructescens, also called W. macrostachys), there are many. Elsewhere in North America, none of the wisterias are native, but American wisteria is less invasive.

I live in an area too dry for wisteria to do well, but a few years ago I planted one anyway. I am trying to direct it across a trellis, Asian-style. Reading about wisteria, I should do a lot more trimming to train it. Every time I find a shoot looping out along my fence, I remember my father's dislike of wisteria and wonder if I've made a mistake. But it is quite beautiful. 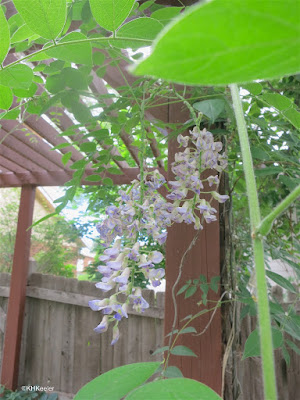 
Posted by A Wandering Botanist at 2:00 PM