Happy Poinsettia Day!
December 12 is Poinsettia Day. It is the day Joel Roberts Poinsett, from whom the plant gets its English name, died. Poinsett brought poinsettias to the United States. I always prefer days honoring people's birthdays, but, alas, Poinsett was born in March.

Which seems puzzling, poinsettias are native to the Americas. They could not have, and did not, come to the New World from Europe with Christianity.


The Aztecs in Mexico loved poinsettias. They are green most of the year, turn red when flowering. The Aztecs considered them holy, representing purity, sacred celebrations and human sacrifice. Their gods required periodic blood sacrifices and the change in poinsettia color mirrored that.

How did a plant that symbolized human sacrifice become the holiday plant on every corporate secretary's desk? 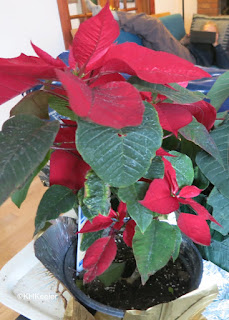 Poinsettias grow in open areas across Mexico south to northern South America. They are "short day plants": blooming is initiated as the days become shorter than nights. Thus, as the winter solstice approaches in Mexico, the top leaves of poinsettias turn red and the flowers (small and simple, surrounded by those big leaves) develop. They are dramatic: everybody saw them.

Sometime in the 1500s, a Christmas miracle linked poinsettias to Christmas. A poor girl, called Maria or Pepita, had no gift to give at Christmas. Guided by an angel, she picked the big green poinsettia leaves and reverently laid them on the altar. Christmas morning, they miraculously turned red.

Thereafter, Mexicans began incorporating poinsettias into Christmas celebrations and by the 1600s the Franciscan missionaries were enthusiastically using them at Christmas, pointing out the star shape of the red bracts as representing the star of Bethlehem and that the red color reflects Christ's sacrifice.

Christmas in Mexico is a blaze of poinsettias today.

But how did they become the emblem of the holidays in the United States and beyond?

Poinsettias were brought to the U.S. first by J. R. Poinsett in 1825. Poinsett was an important American diplomat--read his interesting biography link--and the U.S.'s first Ambassador to Mexico. He was also a sharp amateur botanist, and, seeing poinsettias, brought them back from Mexico with him. He called the plant "painted leaf." It picked up the common name "poinsettia" after Poinsett, who was a highly visible figure in the early 1800s, and because this new plant was initially given the scientific name Poinsettia pulcherrima.

Poinsettia, the common name, is variously pronounced "poin sett i a" and "poin sett a." I personally prefer the second one, though dictionaries suggest that most people pronounce that last i. The scientific name was changed from Poinsettia to Euphorbia in recognition of the plant's relationships to other euphorbias.

Growing a few poinsettias in South Carolina, where Poinsett made his home, doesn't explain the phenomenon: million poinsettias sold every starting in November.

For that, we thank Paul Ecke.

The secret of compact poinsettias was worked out in 1991 by a graduate student who published it. Consequently other growers can produce equally attractive plants, but Paul Ecke Ranch still has some 70% of the U.S. poinsettia sales and 50% worldwide, of a business that sells 70-80 million poinsettias every November December.

Poinsettias are a florist's dream. They are easy to get to flower in a greenhouse and hard for individuals to get them to flower. The plants require nights of 13-14 hours of darkness to flower. A greenhouse manager in most of the Northern Hemisphere simply turns off all artificial lights at sunset, doesn't turn the lights on until dawn, and the natural winter darkness induces flowering. The problem at home is that poinsettias are extremely sensitive to light. Even a little bit of light will stop the hormones that induce flowering. A study showed that 1 minute of a 25-watt bulb was enough light to stop flowering. That means the headlights of passing cars sweeping your window can prevent flowering.

I bought poinsettias last winter and most of them survived the summer. So I have been trying to get them to flower all fall: in a front room we rarely use in the evenings, in the laundry room, in an upstairs bedroom where I have been putting them into a closet after dark. As you can see (photos taken today Dec. 12), the results are disappointing, nothing like the poinsettias you can purchase in almost any store this month.

After failing to have the poinsettias flower, people resort to simply buying poinsettias in November and December and throwing them out in January, to buy new ones in full flower the next November. How very nice for the florists!


Notes: poinsettias are not poisonous see snopes.com link I ate a number of leaves at different times this past month. They aren't awful, but the flavor certainly did not encourage me to eat a second leaf.
I have been given a couple of holiday-themed talks this month and discussed poinsettias. As a result, writing this was both easy and hard. Easy because, since I have been talking about this stuff, I know the material. Hard, because written and spoken stories differ in a curious variety of ways. Spoken, for example, references to where I got the information don't fit in easily. Written, I enjoy including links I liked, such as the one to snopes.com that explains that poinsettias aren't poisonous. Interesting how the medium modifies the story.

Posted by A Wandering Botanist at 11:58 AM