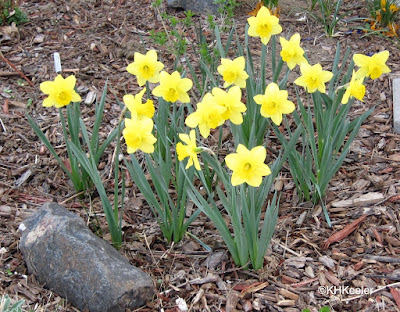 The English called them daffodowndillies 400 years ago. The scientific name is Narcissus. Narcissus, daffodils, jonquils and paperwhites and whatever other names you know, they are all closely related.

They have been cultivated for hundreds of years, leading to diverse varieties and color forms now found all over the world.

Did you know they are poisonous?


Oh yes! Daffodils, narcissus,... all of the plants in the genus Narcissus (amaryllis family, Amaryllidaceae) are quite toxic. 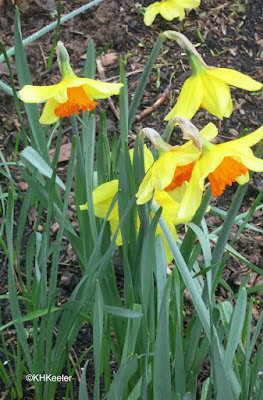 You wouldn't generally think to eat them, and they reportedly taste quite bitter.

But they contain the alkaloids lycorine and galantamine and the glycoside scillaine. If eaten, these produce first salivation, then nausea, abdominal pains (often severe), accompanied by vomiting and diarrhea. Trembling, convulsions, paralysis, and death may follow.

Beardshaw reports that according to legend, daffodils were brought to northern Europe by a crusader who admired them during his travels to the Holy Land and sent bulbs home to his sweetheart. When he returned, the bulbs were served at the welcome feast, presumably believing they were some sort of onion. The crusader and his lady died of lycorine poisoning.

That story is pretty dubious, but there really is an ongoing problem of people mistaking daffodil bulbs for onions. You'd think it would be hard to do, but take a look at the cases The Poison Garden website reports, of people who served daffodil instead of onions: the Poison Garden, Incidents).

Basic lessons: if it doesn't smell like an onion, don't serve it! If it tastes weird and bitter, don't finish eating it. 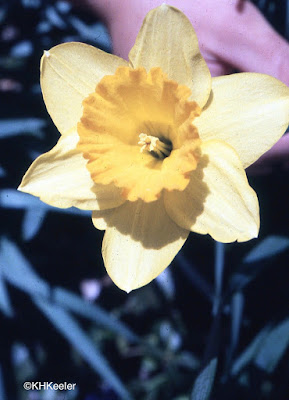 The origin of the name narcissus is one of those stories everybody knows. Narcissus was named for the Greek who thought his own reflection so attractive he was turned into a flower. I was surprised, though, by some of the details of the legend. It was reported in detail by Ovid (Rome, first century BC). Narcissus was a young man of great beauty who ignored young women or men who admired him. Echo fell in love with him, and when he spurned her, she faded away to the disembodied voice she is today. The god Nemesis, called upon by a boy Narcissus rejected, led him to a clear fountain. There, Narcissus saw his own beautiful image reflected in the water and fell madly in love with it. He lingered by the pool, bemoaning the fate of loving himself so dearly and being the only one worthy of his love, until he died. The gods turned him into the yellow and white flower narcissus, presumably in part as a lesson to others, in part in honor of his great beauty. (Ovid online: link)

A century later, the Roman natural historian Pliny the Elder (d. AD 79) refuted the legend, according to him it was not the source of the name. Pliny wrote, narcissus

"is injurious to the stomach, and hence it is that it acts both as an emetic and as a purgative: it is prejudicial, also, to the sinews, and produces dull, heavy pains in the head: hence it is that it has received its name, from "narce," and not from the youth Narcissus, mentioned in fable. " (Pliny online: link [narce means torpor or lethargy])

If Roman authors disagreed on the source of the name, what can I say 2,000 years later?

Well, that archaeologists recently found another version of the Narcissus legend and in it, the details are grimmer and Narcissus doesn't waste away but dies a bloody suicide (BBC History online: link).

Most Narcissus species originated around the Mediterranean. The Iberian penninsula has more native Narcissus species than anywhere else. They were carried all over the world so long ago that even the experts can not give an unambiguouos story of their travels.

They are common in the Holy Land. Some scholars argue that the rose described in the Bible, for example in Isaiah 15:1 "...and the desert shall rejoice and blossom as the rose" is a narcissus. The Hebrew word (chabatstseleth), which appears only in Isaiah and the Song of Solomon, indicates a plant that has a bulb. While some sources suggest this is a narcissus (see beautiful picture: link) the pages that a Google search pulls up mostly say that chabatstseleth is probably a meadow crocus.  Nevertheless the Wild Flowers of Israel website lists narcissus (the common narcissus, Narcissus tazetta) under "Biblical Plants."

Certainly they were grown in ancient Egypt long ago: they were found on the neck of the mummy of Ramesses II (d. 1213 BC). Narcissi (you can make the plural narcissuses too) have been grown, admired and appreciated across all the Middle East since ancient times, documented with scattered reports and drawings. The Prophet Mohammed (c. 570-632 AD) wrote:  "He that has two cakes of bread, let him sell one of them for some flowers of the narcissus, for bread is food for the body, but narcissus is food of the soul."  (from oocities.com)

Narcissi reached China before 1100 AD. There, they became important flowers in the celebration of Chinese New Year which marks the beginning of spring in the Chinese calendar (link). Narcissi are grown in pots to flower indoors for the holiday. The bulbs are often carved or forced into interesting shapes. (link). See some grand examples: link The name in Chinese is translated water fairy and the English name usually Chinese sacred lily. Botanically they are Narcissus tazzeta, the common narcissus (link).

While in many cases we don't know the path narcissus bulbs took to their present location, one world-tour is pretty well documented. The common narcissus variety called Chinese sacred lilies almost certainly originated along Mediterranean in Europe before they crossed Asia to be grown in China. In the 1800s, Chinese emigrants brought them to California. From California, they crossed North America to be planted in gardens in the eastern U.S., where European visitors spotted them and took them across the Atlantic, back to Europe.

There is much much more about the many varieties of narcissus since people everywhere have loved them for millennia as a a flower of spring, representing hope. 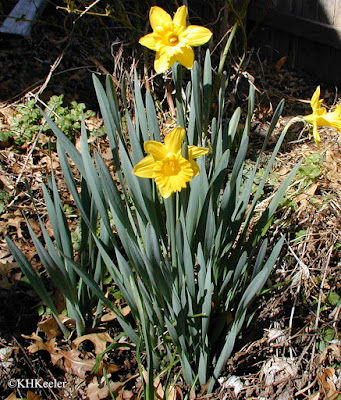 
Kathy Keeler
More at awanderingbotanist.com
Join me on Facebook: https://www.facebook.com/AWanderingBotanist


Posted by A Wandering Botanist at 1:57 PM