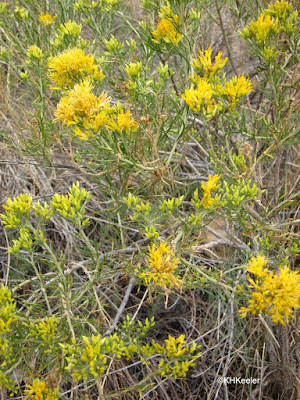 Every fall, the Rocky Mountain foothills turn golden as the very-abundant rubber rabbitbrush,
Ericameria nauseosa, flowers. It is a spectacular display, coming at the end of summer when most plants are through folowering.

Rabbitbrush is in the sunflower family, Asteraceae. The yellow “flowers” are in fact clusters of small flowers. There are a number of species of Ericameria and its close relatives Chrysothamnus but the common one in northern Colorado is Ericameria nauseosa, rubber rabbitbrush. You'll still see it called Chrysothamnus nauseous, but the big genus Chrysothamnus was split and rubber rabbitbrush was part of the group put into Ericameria.  It is a woody shrub, native to grasslands and shrublands across western North America and nowhere else. 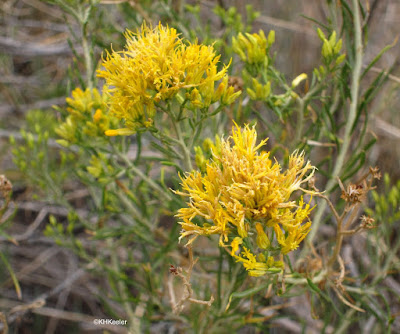 There are 31 species of Ericameria in the western United States and 13 species of Chrysothamnus. Many of both of these are called rabbitbrush.

Rubber rabbitbrush is also called gray rabbitbrush and chamisa. Gray rabbitbrush because the leaves have tiny white hairs. The southwestern name chamisa is derived from the Spanish for “brushwood” or “kindling.” That name is also applied to the saltbush Atriplex canescens, which is in a quite different plant, with inconspicuous gray-green flowers, in the goosefoot family Chenopodiaceae (description of saltbush link).

Rubber rabbitbrush's specific epithet nauseosa means “smelly.” Some people dislike the odor, which reminds them of rubber or heavy oil. Other people have liked the smell, likening it to pineapple. I picked pretty flowering branches of rubber rabbit brush this week and phew! they do smell like heavy oil. I put them on a shelf where they look nice but we don't have to sit next to them. 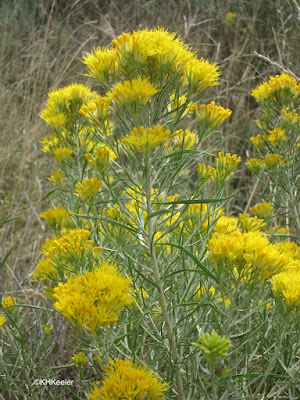 The relation to rubber is real. Rubber rabbitbrush contains rubber. Native Americans made a chewing gum from the roots. In the 1930s, as the United States worried about becoming involved in the Second World War without access to tropical rubber supplies, researchers took a serious look at rubber rabbitbrush as a source of rubber to replace tropical rubber. They concluded that rabbitbrush rubber was good enough, but the cost of processing would be very high. Then the Second World War ended and tropical rubber became readily available again. There continues to be work on rubber production and other uses of rubber rabbitbrush latex, because the plant is plentiful, fast growing, and native to central North America. (see story)

At the edge of the Rockies, rubber rabbitbrush can be very common. Once established, rabbitbrush plants are very drought-tolerant. They hang on in bad years, reducing erosion. They grow better than most plants on poor and very alkaline soils and readily colonize disturbed sites, whether along a road or after a fire. The plants are long-lived so a curious consequence of their ability to grow on disturbances is that archaeologists use them to locate ancient fields and forensic scientists look for them as indicators of unmarked graves.

Wildlife managers consider rabbitbrush poorer forage for animals such as mule deer and pronghorn  than sagebrushes, but those and other rangeland animals can and do eat rabbitbrush, so while it is not necessarily welcomed by range managers, it is tolerated as a food resource. It is an important host of the northern checkerspot butterfly, Chlosyne palla (see butterfly link). 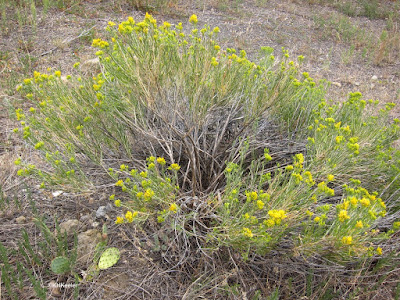 The name rabbitbrush probably comes from the idea that rabbits or jackrabbits sheltered in it and came dashing out to escape as you rode closer, rather than that it was jackrabbit food, although nobody really knows. The shrubby stems aren’t thorny, but they’re tough: they provide good shelter for jackrabbits. (Jackrabbits are native and widespread in the western U.S. The cottontail rabbit was introduced to the U.S. from Europe. See comments: there are in fact many species of native American rabbits that could leap out from under rabbitbrush. link with pictures and descriptions)

Rabbitbrush blooms late, from the very last days of August to October in northern Colorado. By that time most other plants are done flowering for the year. The flowers are an important source of nectar and especially pollen for insects. The flowers have a pleasant scent and attract bees, butterflies, moths and other flower-visitors. Honeybees make a fine varietal honey from it. Great photo  (The pleasant scent is not a contradiction: the flowers have a lovely sweet odor, but the stems and branches smell like oil.)

Since the plant is common, most Native American tribes in its range used it, at the very least as fuel. It had some medicinal uses, for example among the Navajo in cleansing ceremonies and for headaches, by the Cheyenne as a cold remedy. It was widely used for construction, by the Hopi for wicker mats and other woven items, and arrows, though it was not a preferred arrow wood.
Rabbitbrush makes a strong yellow to deep olive green dye. You can dye with old stems, but the flowers are particularly good. Sheron Buchele Rowland and I found it a totally reliable, strong and durable source of natural dye. Before us, lots of people, including the Hopi and Navajo used rabbitbrush to dye baskets, wool and cotton.

Currently rabbitbrush is being recommended as a landscape plant. The late yellow flowers add a burst of color to a yard. The seeds have a white pappus that catches the wind and so the plant is crowned cute fluffy seeds into the winter. By late winter the old seed heads are still attractive in a fuzzy brown way. The plant is highly flammable, so should not be planted immediately next to buildings given the wildfires that frequently ignite in northern Colorado. The plants will probably regrow from the base after burning but buildings are not equally resilient.

Rubber rabbitbrush in flower lights up northern Colorado spectacularly, in a way no other late season plant does. 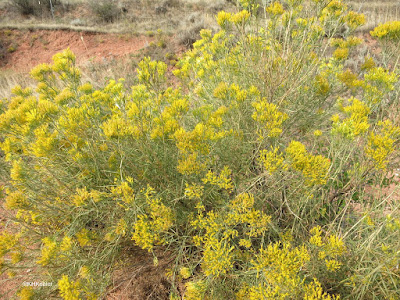 Rubber rabbitbrush is one of the plants included in my book:  NoCo Notables: 15 Northern Colorado Plants Worth Knowing Available at Amazon link 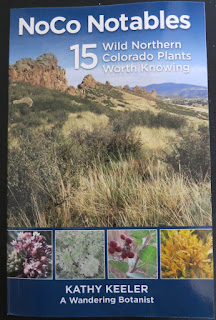 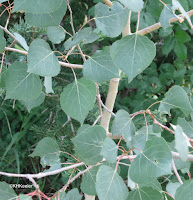 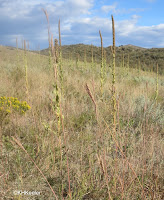 Posted by A Wandering Botanist at 1:17 PM